As I gain experience with building covers for my books, I find the process growing more and more like painting with Photoshop. All of my covers, even the earliest ones, required some manipulation in Photoshop. Darkening the blacks. Balancing the colors. Adding to the edges of the art when those edges were ragged or simply didn’t give me enough extra for the trimming that occurs when paperback books are made.

But the cover for Hunting Wild required the most “painting” of any cover yet!

I found the process of transformation – from photos purchased on Dreamstime.com to finished cover – fascinating. Naturally I want to share the journey with you. 😀 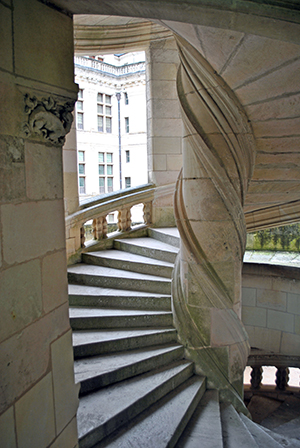 The original photo of the interior of a palace tower depicted one of the stair towers from Chambord, an incredible chateau in the Loire valley of France. The tower was perfect as a rendition of my own Baloron, the castle in which Hunting Wild takes place, except for two things.

One: Baloron is made of reddish stone, not white. And two: the landscape visible through the tower windows should be a dry plain studded with olive trees, not a palace courtyard. Luckily, both were problems I felt confidant I could correct. 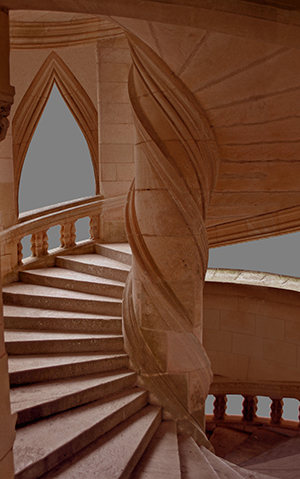 My first step was to cut away the courtyard seen through the openings of the Chambord stair tower. Then I turned the tower stone red. This image shows the arched fill-in I created for the square window at the upper left. In the process of building the cover, the window change came later, when I was trying to fit my title over the art. It was not working well – the title didn’t pop enough where it crossed the open window. I added the arched fill-in to give a better background for the title.

As I worked on the title, I also found I needed a little more tower at the right edge, so I “painted” that in.

I purchased a landscape of olive groves to use for the landscape around Baloron.

If I were being absolutely strict about Baloron’s landscape, I would have insisted on a grassy plain, perhaps with a lake in the background. I did look for such an image, but couldn’t find anything suitable. Since the region around Baloron includes olive groves (and cork trees), even though its immediate acreage does not, it seemed reasonable to compromise.

I didn’t use the entire photo that I purchased the rights to, just a portion of it. If you look closely at the right edge, you’ll see that I used the mirror image of a portion of the photo to extend the edge with the textures that my “painting” required. It creates a funny Rorshach-like pattern that isn’t visible in the final cover image, but that would be problematic if it were.

There’s another anomaly in the lower right portion of the photo. I pasted a portion of the tree tops into the area behind the right balustrade to achieve a more pleasing effect than what was there without editing. I find it interesting that the backside of this “tapestry” is so messy. 😀 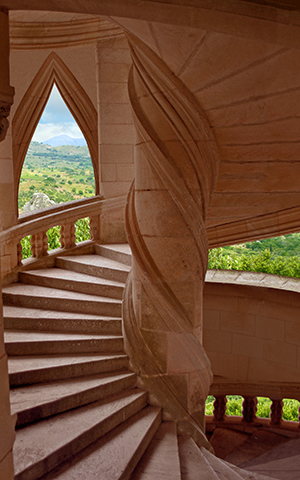 Nope. Nope! No, not that either!

Eventually I achieved a result that I liked. Yay!

Then I noticed that the landscape looked a little too dark for the composition. The landscape photo was taken out of doors, of course. But when you look out at a landscape from indoors, your eyes are adjusted to the light levels indoors, which are much dimmer than outdoors. This makes the outdoors look brighter in comparison. So I adjusted the brightness of the landscape layer in my cover file. Another “yay!” when I nailed it. 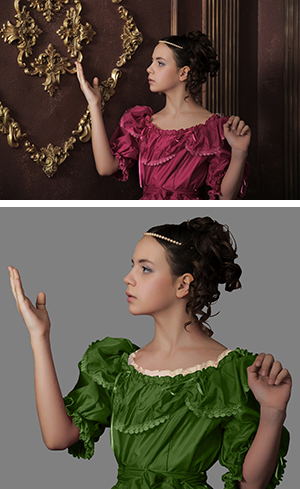 Now my setting was ready for my heroine! I purchased all three of the photos at the same time. I’d looked at hundreds, and only made my final choices when I was sure they would work well together. Even then, I did not purchase the right to use the photos until I’d downloaded low-resolution (and watermarked) comp images and put them together in a test cover to make sure they would work.

Each of the three photos cost $15 for the right to use it on my cover. Plus there was a fourth $15 image that I’d need for the back cover. I didn’t want to spend $60 until I was sure my selections would go together the way I envisioned them. I have planned compositions that simply didn’t work. This one, I am happy to report, did. 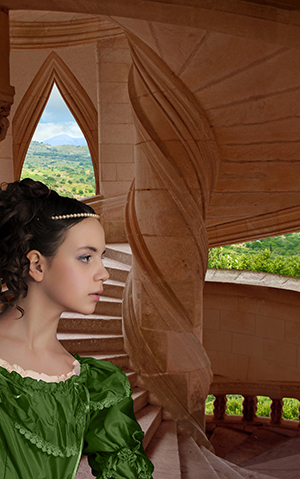 Finding a young woman gowned in garb suitable to a medieval setting who also looked like my heroine was hard. I searched and searched and searched. Finally I settled on a photo in which the model was perfect, although her clothing was not. There wouldn’t be much of her gown showing, so the style (which is Victorian) was not critical. But the fuchsia color would simply not work in my “painting.” I would need to change it to green. Also, she really needed to have the ruffles of a chemise (an undergarment) showing at the neckline.

Even more difficult, the position of her arms would not work. I felt confidant I could change fuchsia to green. I even felt confidant I could create the chemise ruffle. I’d copy the neckline of her dress and paste it onto another layer of my file. Then turn it to a creamy white. Then set the translucency to 50% or so. As I’d envisioned, those changes were fairly straight forward. But the arms?

In my mock-up test cover, the arms proved to be no trouble. Only her shoulders were showing. Plus I’d tipped her forward to have her gazing out over the tower balustrade (rather than staring at the tower wall). I simply removed her arms from the image! (Ew! Sounds gory, doesn’t it?) In the final draft, I found I needed more room for my author byline, which meant I needed to show more of her upper torso. I had to do a lot of copy-and-paste “painting” to lenghthen her sleeves. But I was pleased with the result.

Next came the title, author byline, and taglines. I’d say this part was easy – and it was, compared to the work required for my heroine – except you know from my account above that I had a lot of trouble placing the title. I found a gorgeous font for the title: Mephisto And I discovered that the font Aclonica – for the tag lines and back cover copy – complemented Mephisto perfectly.

Then I decided that I wasn’t satisfied with how the author byline looked in the Mephisto font. It just didn’t look right to me. (You can see that version in my earlier post: Cover Preview: Hunting Wild.) Plus the points of the letters extended so far down that I couldn’t make my trademark byline work – underline connecting the “J” and the “Author of Troll-magic.” 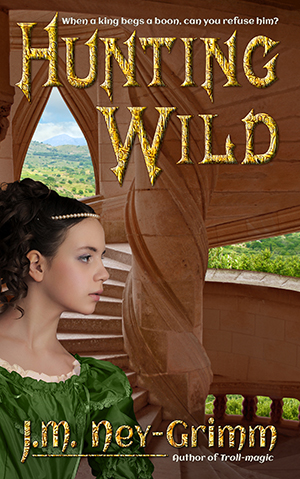 I fretted about the situation for several weeks. I created a cover for another book, on which my trademark author byline worked beautifully. I growled to myself about Hunting Wild. Finally, it occurred to me that I could use Aclonica – the font in the taglines – for my byline as well. I couldn’t just type it in, however. Small caps looked weird. Upper/lower case didn’t match my branding. So I customized: upper/lower for most of it, stretched lower case “M” and “N,” and an upper case “Y.”

Let’s take a quick look at the finished cover side by side with two of the photos that went into creating it. Do you see why I call it “painting” in Photoshop? The transformation is rather dramatic. At least – I think so. 😉 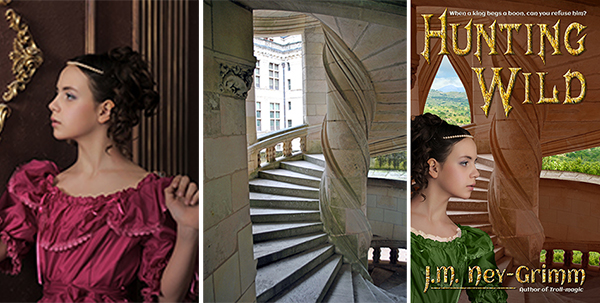