I remember the first time I encountered a progress bar on a writer’s website. I thought, “Oh, cool!”

I’m visually oriented, so that visual representation of the writer’s progress on his or her current work gave me a much better feel for how near (or far away) the point of completion stood.

I wondered if I would ever add a progress bar to my website, but not seriously, more as a piece of fiction about myself. 😀

Most writers didn’t (and don’t) have such bars on their websites, but every now and then I would see another. I assumed there was a “widget” or a plug-in that produced the bar, but I didn’t think about it too hard.

And then I realized last April that I wanted a progress bar for my work in progress.

I thought about searching among the WordPress plug-ins for one that creates a progress bar, but…

I feel a little embarrassed to admit it, but I’ve forgotten how one does this! The last time I was mucking about with plug-ins was when I set up this website in February 2012, more than 4 years ago. I remember none of the details. I’m sure I could figure it out again. At some point, I’ll probably have to. There will be something I decide I want for my site that cannot be done in any other way.

But I decided to try Google first for the progress bar.

Almost immediately, the results turned up someone’s blog post with the HTML code that would do the job. It seemed very straight forward, so I dove in.

The blogger’s example progress bar was orange on black, and the code looked like –

Before I show you, let me say, “Don’t panic!” I’m going to explain each piece. And the HTML is quite a short string. 😀

This is the visual that the HTML produces:

Now, you’ll notice that this black and orange bar is a lot longer than the blue bar in my sidebar. That’s because the HTML code does not specify the length, so it simply extends to the edges of the text window.

I don’t like the l-o-n-g progress bar, so if I had been planning to use it in a blog post pinned to the top of my blog, I would have searched for a way to control the length of the progress bar. Because I was planning on putting it in the sidebar, I didn’t need that. So I didn’t go searching. 😀

Now, let’s look at the different pieces of that HTML string.

In HTML, every piece has to have the beginning indicated and the end indicated.

Here’s the code with those beginnings and endings highlighted.

So what about those two pieces? What’s in them?

This is the first piece:

The first piece gives the black background for the progress bar.

Now I am not – not – well versed in using HTML. I’ve picked up what I need to know by looking at the HTML windows of my blog posts. And that’s it. I’ve never taken a class. I’ve never even read a book on the subject!

Which means I won’t be able to explain the way a more informed HTML-user would. But I can explain enough so that you should be able to get your own progress bar in your own sidebar to look the way you want it to.

So, in the first piece, the id=”progressbar” is probably simply an identifier, telling the computer, “Hey! This piece here is the progress bar.” Or, it might also tell the computer something about the basic shape of the element – long and thin and straight.

Those of you who do understand HTML are probably laughing right now and thinking, “Does she really think that? Could anybody possibly be so ignorant?”

Now I do know what this does. It controls the color of the the background of the bar. #000000 is black.


The Shape of the Corners

This controls the corners of the bar. My bar has rounded corners. But if you wanted square corners, you get them by changing 6px (6 pixels) to 0px (0 pixels).

Here it is with 3 pixel corners.

And with 6 pixel corners:

padding:3px; controls how much of the background shows around the edges of the ever-changing orange part of the progress bar. Change that 3px (3 pixels) to 0px (0 pixels) and the border goes away altogether.

Change the 3px to 6px (6 pixels), and the border gets very thick.

That’s the whole of the first piece.

And a greater-than sign > caps off the whole description.

I always reproduce those separators exactly! If you accidentally omit one, the HTML won’t work the way it is supposed to, and the image on your website won’t be what you intend.

There’s the first piece as a whole.

The second piece is the ever-changing orange that grows longer as you write more words or shorter when you cut a few out.

Ah! That’s the bit that controls how much of the black background is covered by the orange. Each time I updated my progress bar, I had to do a bit of math.

It controls how thick the overall progress bar is. If you change height:10px; to height:4px;, it gets very thin.

The Shape of the Corners, Take 2

This controls the shape of the corners of the orange bar.

Hmm. I think I like 3 pixels better than 4 pixels. I didn’t tinker this much with the code when I was setting up my own progress bar. I’m going to try 3 pixels when I finish writing this blog post. 😀

And that was the last bit of the second piece.

Here are all the bits that make up the second piece.

However, it’s not quite the end of the HTML code.


Putting It All Together

We have the first piece.

We have the second piece.

But each of those only just describes the start of each piece. We must also tell the computer, “Okay, that’s enough. End it here.

And each piece needs its very own “End it here.” They can’t and won’t share! 😀

That gives us the whole thing, if we’re okay with orange on black. I wasn’t.

I wanted something that would blend better with the other colors on my website. I liked the idea of dark blue on pale blue. Since #000000 was black, and #f96604 was orange, what numbers would yield the blues that I wanted?

I did some searching and discovered that the whole rainbow of web colors is described by numbers called “color hex codes.” Each is composed of a combination of letters and numbers, six of them. And there are web sites were you can match up the color and the number.

I googled and found one of these sites: http://www.color-hex.com/.

The top navigation bar at http://www.color-hex.com has something labeled “get info.” I clicked the triangle next to that label, and a color picker appeared. 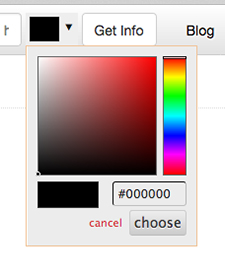 I clicked around on it until I arrived at a light blue that looked good. The hex code for it #dff0fd appeared in the little info box. I copied it and pasted it into the HTML piece that controlled the background of my own progress bar. 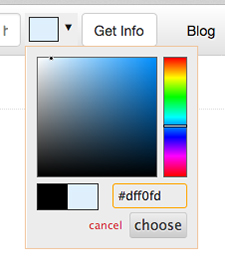 The orange on the light blue background does not look good to my eye! Of course, we’re only halfway to what I want.

I clicked around on the color picker some more, until I arrived at a darker blue that looked good. Then I copied and pasted that number #1b8be0 into the HTML piece that controlled the “orange” part of my progress bar. 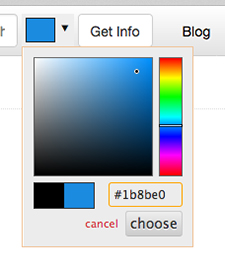 I finished the first draft of my WIP and sent it off to my first reader this week!

I feel a little lost. It’s time to start work on the cover – and I’ve been searching for the right images for it – but I’m already missing the writing.

I think I’m going to treat myself to writing the short story that’s tugging at my inner artist while I work on the cover.

And there you have it! More than you ever wanted to know about HTML and progress bars! 😀


HTML to Copy and Paste

On the chance that you want a blue-on-blue progress bar for your website, here’s the complete HTML. Feel free to copy and paste. Remember to change the 75% to the percentage for your WIP!

For more about blogging:
Why I Wanted a Progress Bar
Why Create a Site Map?
Slow Blogging and Other Variations
SPAM Deluge

6 thoughts on “How to Create a Progress Bar”