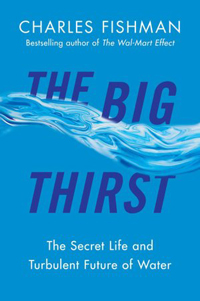 Last summer I read The Big Thirst by Charles Fishman. The book was fascinating, and I highly recommend it. But perhaps your TBR list is already too full. To pique your interest, I’ll share three cool facts I learned.

There are oceans in the sky!

The vast spaces between galaxies hold a thin gauze of hydrogen gas left over from events following the big bang. Supernovas hurl oxygen (and all the other elements) out into the universe to mingle with the hydrogen. All sorts of interesting things can happen then.

But in some reaches of the universe, what is happening is water. The oxygen and the hydrogen are combining to make good ole H2O in quantities that stagger the imagination, quantities so immense that these cosmic oceans dwarf a droplet the size of our planet – like all Earth’s oceans dwarf the dewdrop on a dawn spiderweb.

That’s more water than I can imagine!

Twenty to thirty miles beneath the soil under our feet is Earth’s mantle. The rock of the mantle is not truly molten, but plastic. Perhaps a bit like hot toothpaste? (No, I’m not a geologist!) And chemically attached to all that hot, squodgy rock is water.

Serpentinites are hydrated mantle rocks that have surfaced enough to cool and lose their plasticity.

When water is too clean, it’s dangerous!

Water attracts. That’s why it does such a great job cleaning, even without soap. Dirt and debris stick to it and get swept away. Drinking water is actually pretty dirty, but that’s a good thing. I’ll tell you why in a bit.

Water for cleaning computer chips is clean. Really, really clean. It has to be. One tiny speck of dust left on a computer chip will interrupt the thin filament through which electricity runs, and the chip won’t work. So the water is filtered through 49 steps (give or take a few – I’m not a microchip engineer either!) to make sure it is ultra pure. And it cleans the microchips beautifully.

If you drank it, it would also clean you! The calcium you need for your bones would be swept out of you with the ultra pure water. Likewise the many other minerals your body needs. Perhaps one glass wouldn’t do too much damage, but a regular dose . . . not good!

A water engineer at one of the microchip plants reported that he stuck his tongue in a glass of ultra pure water. (Note: don’t try this at home!) He said it tasted very, very bitter.

The ultra pure water is actually categorized as hazardous waste. And it needs to be. In fact, in places where drinking water is supplied by dirty water cleaned through three or four stages of filtering, dust and minerals have to be added back in. The water isn’t ultra pure, but it’s still too clean to taste good. Our water has to be just the right amount of dirty!

There’s much more in The Big Thirst than that however. Go check it out!

(The links are for your convenience only. Do consider checking your local library. That’s where I found the copy I read.)

The Big Thirst at B&N

The Big Thirst at Amazon