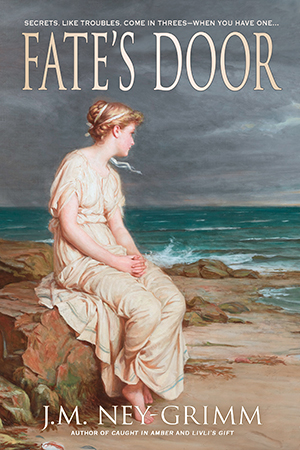 Each morning, in the chill before the sun’s rising, Nerine and the three Fates stand under the mighty branches of the World Tree, gazing into the depths of the root-girdled Well of Destiny to master the dooms they must bring to life that day.

When the dawn’s visions show Nerine’s lover – shipwrecked and drowning – all her renounced yearning for him rises anew.

Love and coming of age in a mythic Mediterranean where the gods and goddesses of old shape history.

Fate’s Door is available as an ebook.
Amazon I B&N I iTunes I Kobo I Smashwords

Fate’s Door is available as trade paperback.
Amazon I B&N I Book Depository I Fishpond I Mysterious Galaxy Books I Powell’s Books

“…I thoroughly enjoyed this book. I love mythology and this really gave it a twist and kept me totally entertained. I did not want to put it down… Instead, I stayed up late to find out what happened next.” —K. Mataisz

“…a great storyline and the characters were developed [well]…” —Marilyn Smith

“…the author made these mythical characters feel so real and human even though most of these characters are not human at all.” —Tricia Schiro

Above them, the rooks cawed in the winter-bare branches of the World Tree. Did the birds see visions in the well of destiny? Sense the dooms meted out there?

The shrouded norns had first watered the Tree, dipping from the spring’s chill outflow. Now they posed beside its deeps, meditating on the images they saw reflected. What did they see? Did they see Altairos, the island-prince of Zakynthos? Did they see what Nerine saw?

She steadied her quivering lip and felt Tynghed’s hand, stealing from within the fate’s dark cloak, slipping behind her to clasp Nerine’s hand.

Ah, blessings, it could not be! Altairos drowned in the waves of his beloved ocean? And yet she knew it was. The breath of life would pass from him this day, and she would lay out the blue and green silks with which the norns would weave his fate. “I won’t. I won’t do it,” she breathed. But she would. The Shuttle-catcher, the Patterner, and the Weaver commanded her obedience. How could a stranded sea nymph defy them?

Nerine bit her lip. She possessed a role in this morning’s seeing.

The leafless branches of the World Tree loomed over them on the rise, while its massive twisting roots clawed the lichen-spotted rocks and pockets of moss where it grew. One root crawled down the low outcrop overhanging the well to wrap the far side of the water. Dark water, not reflecting the gray sky, but holding a translucence that suggested it went down and down to the ice at the world’s heart.

Orroch, bent and old under her dark cloak, the Weaver of Fate, would translate the well’s visions into a tapestry of events. She was grouchy, was Orroch. Did it bother her that she doomed thousands to die every day?

Eowys, tall and stern within her black mantle, the Patterner of Fate, would use the well’s visions to select and draw the heddles of the loom that gave Orroch her textile canvas. Eowys was almost prissy in her demeanor. Did it spill over from her duties at the loom? She had to be so precise in the strings she pulled. One mistake, and someone innocent would suffer for it. How did Eowys bear the responsibility? Nerine was glad it was not hers.

The Shuttle-catcher of Fate, Tynghed, hidden by her somber cloak, but beautiful and smiling within it, would send the weft threads across the loom to Orroch’s hand, and catch the shuttle again when Orroch tossed it back. Tynghed was the youngest of the norns. Would she grow finicky like Eowys as she grew older? Or crotchety like Orroch? Nerine hoped not. Fervently hoped not. She couldn’t bear it here in the north without Tynghed’s warm kindness.

Nerine served all three norns as handmaiden. And Nerine would choose the new materials required for this day’s weaving.

Take heed, Nerine. That was the meaning in Tynghed’s pressing fingers. Nerine would need pale peach for the baby born to a king, blood red for a battle between Sparta and Athens, gold for a hero’s bright deed. And if she failed to watch the images unfolding in the well, she would not know what else to choose for the day’s work.

She had to know.

So Nerine watched, but her heart ached, and memories from her past overlay the flowing images on the waters of the well.

Altairos as a curly black-haired boy, laughing, his eyes crinkling in that way that only he had.

Altairos as a gangly youth, earnest and passionate, reciting poetry to her.

Altairos as a young man, strong and sure, pressing a first kiss upon her willing lips.

Who but she would lay out the symbols of his death? She, the handmaiden of the fates. She couldn’t bear it – to lose him so.

Fate’s Door as an ebook: Amazon