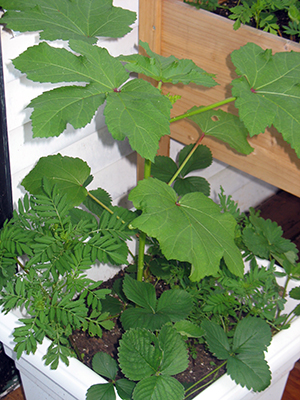 First, a head’s up that my posting may be a bit erratic for the next 6 weeks or so.

We don’t yet know whether our twins will be heading off for their first year of college…or not. But we have to prepare as though they are going, which means I have lots of masks to sew, as well as making sure they have all the normal dorm room and school supplies. It feels confusing to prepare for the empty nest (which I dread) when one doesn’t know if it will actually be empty or not!

I feel rather scattered!

In addition to all the college prep, I’ve been taking a class on how to create ads for my books on Amazon. That’s been an eye opener and a head-crammed-too-full experience. I don’t think I’ll really know what to make of it all until…not sure when. 😉

Through all the stress, gardening is helping me find at least a little serenity. So I’m going to share more photos of my garden. It feels magical how the bare beds of soil have clothed themselves in lush greenery over the past few weeks.

Just look at that okra (above) to the right of our front door! It’s becoming a sapling tree! No okra pods on it yet, but soon…

The okra at the back of this bed still seems spindly to me. I suspect the plants don’t get quite enough sun in this location. Since I haven’t gardened in containers on the front porch before, there’s going to be a learning curve. Some things will work. Others won’t.

But the lettuce has been glorious—all the way into July! No doubt the protection from the afternoon sun is why. I love the way the marigolds provide spots of brightness amidst the greens. They’re there as companion plants to protect my vegetables from pests; somehow I hadn’t been expecting the beauty. 😀

The strawberries in all three of the large beds have given us lovely fruits. Just a few, since this is their first year. But much appreciated!

The pepper plant now has two peppers growing on it! I’ve never grown bell peppers before, so it’s exciting!

There’s cilantro hiding under the marigolds, as well as a fragile parsley seedling. Both of those are supposed to bolt in the summer heat, but the shade of the other plants plus the shelter from afternoon sun seems to be helping them, just as it does the lettuce.

The basil is getting big enough that I’ve harvested a few leaves to include in salads of lettuce. I’m looking forward to tomato, mozzarella, and basil melanges in another week or two.

I have to confess that I planted the radishes (far left, above) too late. The radish greens have been lovely in salads. And we did get two crisp, sweet, and spicy radishes. But the third was woody. And the fourth and fifth had no bulb at all. I’m going to try them again in the cool weather of fall, shortly after we find out how the beets did.

In the meantime, I’m gong to try a tomato on one end, where I’ll let it flow downward over the side. We’d planned to try hanging tomatoes in topsy-turvy planters, but realized that we didn’t have a means of suspending them far enough from the ground for that to work. So the rest of the tomato seedlings are going into grow bags. Two are thusly planted (below). Four more await in their small seedling pots. 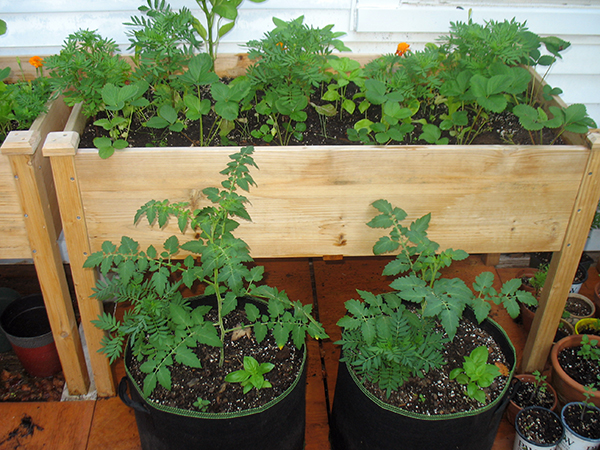 When I planted them outside in the pot by the steps, four of them succumbed to the heat. But mint is prolific. I figured that two plants would fill the pot by mid summer. Then a squirrel squashed one of the mints flat!

So I popped in some marigold seedlings when I thinned them from the other beds. The squirrels got two of the marigolds as well! But the rest have filled out nicely (below, right), and the mint is thriving. It smells delicious when I run my hands across the leaves!

The planter on the left of our front door was supposed to have rosemary in it.

When my grocery store rosemary declined to root, we found a local source for a small plant in a pint pot. But as the cherry tree leafed out fully, we realized that the spot was too shady. So I put the rosemary in a gallon clay pot that lives at the other end of the porch instead. And we planted chives, which like some shade, by the door.

We just ate a bunch of those last night on baked potatoes. They tasted so good!

For more about our garden, see:
Container Gardening at Casa Ney-Grimm
First Strawberries!
Tomatoes Versus Birds 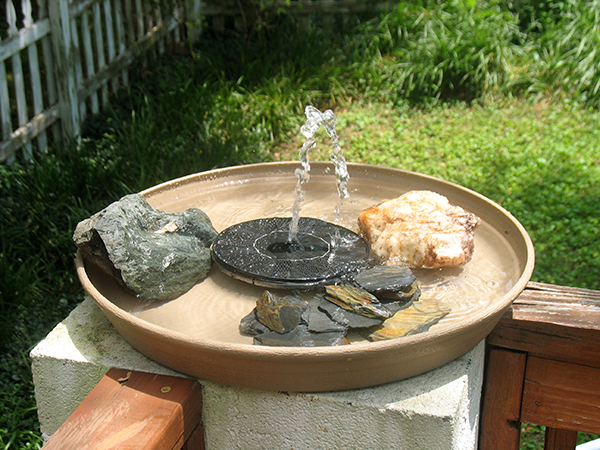 Quite a few critters call our yard home.

A deer family nestles down for shelter in the tall back grass in winter and grazes in summer. Mama deer gave birth to her fawn just a few weekes ago under our azaleas. All of them like to snack on our cherry trees.

In our front yard, rabbits nosh our aronia bushes. If we’d realized that aronia was such a bunny salad bar, we would had planted something else, but we didn’t. So we upend storage containers over the aronia every evening, and remove them every morning. (The plants would be nibbled bare without this protection.)

Many years ago, when we tried tomato plants in our back yard, a ground hog took one bite of nearly each tomato ripening on the vines!

So far, this summer, our lettuce, radishes, strawberries, and other seedlings have been largely unmolested. I think the table height of the beds foils the rabbits. I’m hopeful that their position on our front deck, directly against the house, discourages the deer. But I’m concerned about birds.

Will they eat our strawberries? We lost two berries to birds yesterday.

Will they peck our tomatoes? Our plants are not yet bearing, but I trust they will in time.

So when I saw that Gary Pilachik at the Rusted Garden had a video on exactly this topic, I watched it. 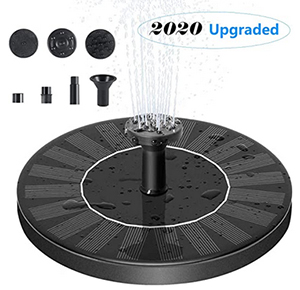 From him, I learned that birds primarily eat your berries, because they are hungry. So we decided to set up a bird feeder again. We’d tried exactly that in early May only to discover that the plastic on ours had degraded so badly that it cracked when we washed it. It was very old. Now we have a new one en route to us. I’ll show you a photo, once it arrives and we get it set up.

Thirst is what causes birds to peck your tomatoes. So we’ve created a birdbath, with the idea that our winged visitors will drink from its fountain rather than from our fruits.

Cash remains scarce at Casa Ney-Grimm, so we needed something inexpensive. Thus, the plant saucer plus solar fountain.

Here’s the Rusted Garden video, if you’d like to hear what Mr. Pilachik has to say. I hope he is right that the birds thusly attracted eat insect pests while they are in the neighborhood!

For more about my garden, see:
Container Gardening at Casa Ney-Grimm
First Strawberries!

There was just one ripe on Tuesday, so we cut it in quarters to allow each of us a taste. It wasn’t as sweet as I was expecting, but the strawberry flavor was just MORE. Wow!

Today, there were seven ready to be picked.

We haven’t yet eaten them. I think we should wait a day or two, because the berries that are just starting to blush may be ready by then, and we could each have more than a mouthful. Will we hold out? 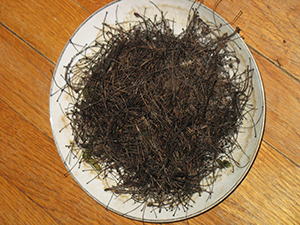 I don’t know if you can really see it in the photos above, but I devised an unusual mulch to keep the berries off the ground. All the videos of strawberry gardening that I’ve watched portray straw under the berries. But I don’t have easy access to straw right now. What did I use instead?

Well, every spring the maples in our back yard shed their seed pods all over. Our back deck fills up with them. Eventually the seed pods go away—I’m not sure where—and all that remains are the stems that once connected the pods to the tree. I usually sweep them off the deck into the the nandina beds below, where the stems enrich the soil.

This time I collected them all and saved them. 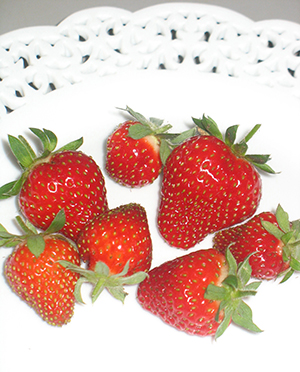 Whenever the strawberries grow heavy enough to bend their stems down to the dirt, I go get a handful of maple stems and place them under the berries. So far it’s working. The strawberries are pristine!

I’ll add a note to this post once we eat the strawberries to tell you how long we waited and how they tasted!

For more about our garden, see:
Container Gardening at Casa Ney-Grimm