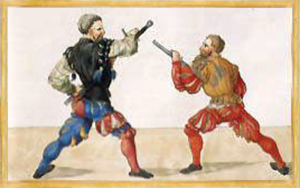 As I mentioned while describing the strike of wrath, I researched long sword fencing in order to have some idea of what my protagonist Tahaern would be doing on the battlefield in my novella Blood Silver,

Just to refresh our memories, here’s a list of the “master strikes” that every longswordsman would have learned and practiced:
• Strike of Wrath (Zornhau)
• Crooked Strike (Krumphau)
• Cross Strike (Zwerchau)
• Squinting Strike (Schielhau)
• Scalp Strike (Scheitelhau) 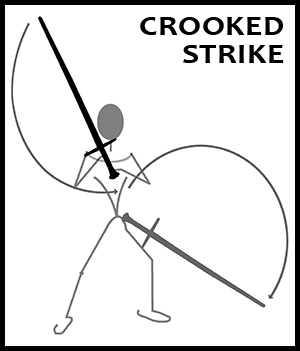 I’ve created diagrams of the strikes to include in the appendices of my book when it releases, so that readers of the story who want to know more can easily learn a little about the strikes.

But two-dimensional representations of motions that occur in three dimensions are very limited in how well they can convey the reality.

The crooked strike seems particularly complex to render, since the version that starts from an upper guard, like the roof guard, comes down initially, but then arcs around sideways.

It makes a lot more sense in video, so I turn once again to Meyer Class Hammaborg for an excellent demonstration of the strike. The video includes many variations on how the crooked strike can be used, both defensively and on the attack, as well as starting from different guards.

There must be a playground or a park near the grounds of the school for swordsmanship, since I could hear kids calling happily in the background. It made for an interesting contrast to the deadly techniques being shown!

I created French-influenced names for the sword strikes as they are used in my story. Thus the crooked strike becomes the coup tordu in Blood Silver.

For more about Blood Silver, see:
Plate Armor, How It Works
Cross Strike, Squinting Strike, and Scalp Strike
The Book Title
The Joust
Which Cover to Choose?
The Strike of Wrath
Rope Climbing and a Cliff
What If the Sword is Wrong?
A Song of Peace
Wielding a Long Sword
Origin of the Story (The State of This Writer)