What if the goddess Bast lay caged in the underground duat of the ancient Egyptians, entrapped and imprisoned there?

What if the messenger god Mercury flew between the celestial spheres of our solar system, rather than between Mount Olympus and Mount Helicon?

What if the sea nymphs of old Greece ruled underwater kingdoms beneath the warm waves of the Middle Sea?

My mythic tales feature different worlds and characters, but they share the same rich source of inspiration—the vibrant mythologies of our own ancient history.

(Each story stands alone. You can enjoy any one without having read the others.) 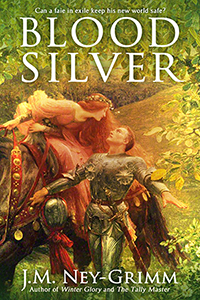 In a mythical Ireland that never was, mortal villages perch all unknowing beside enchanted knolls. Beneath them dwell the cruel and capricious faie folk.

Tahaern, a faie warrior by birth but not in spirit, eschews his vicious origins. Loving the bright world, he serves a mortal village as healer.

But when the faie declare war upon their neighbors, Tahaern must again take up his sword…

Blood Silver is available as an ebook.
Amazon I B&N I iTunes I Kobo I Smashwords I Universal Link

Blood Silver is available as a trade paperback.
Amazon I B&N I Fishpond I Mysterious Galaxy Books

Secrets, like troubles, come in threes. Nerine, a sea nymph of the ancient world, knows too much about both. Love and coming of age in a mythic Mediterranean where the gods and goddesses of old shape history.

Fate’s Door is available as an ebook.
Amazon I B&N I iTunes I Kobo I Smashwords

When young Fae awakens in a locked and deserted castle, she remembers nothing. Who she is, where she comes from, none of it.

A mythic tale of family and betrayal told with all the twists and moments of sheer joy that J.M. Ney-Grimm brings to epic fantasy.

Caught in Amber is available as an ebook.
Amazon I B&N I Inktera I iTunes I Kobo
Overdrive I Scribd I Smashwords I 24Symbols

Caught in Amber is available as trade paperback.
Amazon I B&N I Book Depository I Fishpond
Mysterious Galaxy Books I Powell’s Books

Once she stalked the duat by Ra’s side, carrying his light in her eyes and battling the monsters that assailed them. Now, tormented by confusion and her own fury, she longs to regain the unique powers which—inexplicably—elude her in captivity. In this mythic tale of pride and revelation, a fight beyond death delivers one last chance at redemption.

Serpent’s Foe is available as an ebook.
Amazon I B&N I iTunes I Kobo I Smashwords

Serpent’s Foe is available as a trade paperback. Amazon I CreateSpace

Mischievous Mercurio guards the planet Mercury with quirky devotion. He loves the oddball chunk of rock, with its illusion of retrograde motion and its out-of-sync orbit and spin. Almost as much as he loves playing pranks.

But now the joke’s on him.

With the subtle delight, clever misdirection, and teasing wordplay that Mercurio himself enjoys, J.M. Ney-Grimm tells a tale of steeply rising stakes in a clockwork solar system ruled by the gods of ancient Rome.

Devouring Light is available as an ebook. Amazon I B&N I iTunes I Kobo I Smashwords

Devouring Light is available as trade paperback.
Amazon I B&N I Book Depository I Fishpond I Mysterious Galaxy Books I Powell’s Books 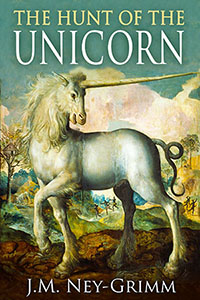 The Hunt of the Unicorn

The Hunt of the Unicorn is available as an ebook in the anthology Here Be Unicorns.
Amazon I B&N I BundleRabbit I iTunes I Kobo

From a ghost park to a time-travel penitentiary of murderers to a menagerie of Egyptian deities, Quantum Zoo presents 12 compelling stories involving 12 very different living exhibitions.

Includes my own “Serpent’s Foe”: A lioness, divine protectress of the gods themselves, lies defeated in a cage. Trapped in beast form, imprisoned behind bars, and confused by nightmares, she longs for freedom.

Quantum Zoo is available as an ebook. Amazon

Quantum Zoo is available as trade paperback.
Amazon I B&N I Book Depository I Fishpond I Mysterious Galaxy Books I Powell’s Books

A NOTE TO MY READERS

My Mythic Tales tend to surprise me!

I wrote Serpent’s Foe when a sudden desire to tell a story featuring a zoo coincided with the unique voice of the goddess Bastet speaking in my head.

Spending time in a zoo located in the ancient Egyptian duat got me thinking about circuses—or rather, the celestial circus that performs in one of the Mary Poppins books. I loved P.L. Travers’ Sol and longed to write about constellations taking the roles of acrobats. Devouring Light was the result.

Caught in Amber was born from a dream I had, while Blood Silver was inspired by Clannad’s haunting song “The Poison Glen.”

All of which is to say: I never know when a Mythic Tale will demand that I tell it, but you can be sure that more of them will hijack my muse from time to time!

I’ll email you when the next Mythic Tale releases, if you’ve signed up for my newsletter. 😀

I’ll never share your email address with anyone, and I’ll only email you when I have a new book out, a book on sale at a discount, or a tidbit of interesting news.