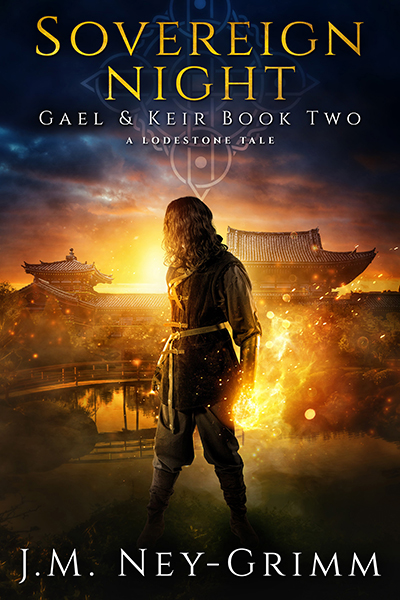 Something is wrong in the city—a vile knot of villainy that beckons Gael and Keir with the magical lodestone they seek while threatening their lives and their secret.

Gael, an illicit mage, hunts redemption with Keir, a gifted healer who helps all who cross her path. Gael loves her loyalty to her calling—and to him—but has grown inured to the fact that they will never hold each other in more than high regard.

Together they seek a cure for the accursed affliction that not only erodes their bodies and minds, but keeps them apart. The lodestone that harbors their salvation lies hidden in riverine Hantida.

But when they enter the city’s gates, the dark mystery lairing there catches them in its claws.

Reavers comb Hantida’s streets and squares by night, crashing their gauntleted fists on a residence gate or a workshop door, and taking a child, a grandmother, or some sleeping fool who thought himself safe.

Always the reavers emerge from the imperial palace at the city’s heart and return to it before daybreak with their captive—just one—who is never seen again.

When the bronze-mailed warriors set their sights on a little girl with horrific burns, the travelers come face to face with the threat.

But more than mere violence lurks behind the abductions. They conceal a rotten core of secrets, intrigue, and conspiracy that Gael and Keir must penetrate while hanging on to their lives and holding true to their quest.

A tale of adventure in a vivid world of magic, shadows, and exotic peril.

Join Gael and Keir on their hunt for the lodestone…

Sovereign Night as an ebook: Amazon I B&N I iTunes I Kobo I OverDrive I Smashwords

Sovereign Night as a trade paperback: Amazon I B&N I Book Depository I Mysterious Galaxy Books

As Carbraes turned back to Gael, Gael blurted, “You fill Dreas’ boots too soon!”

Carbraes’ icy blue eyes, already cold as they rested on his secretarius, grew colder yet. The good understanding Gael had enjoyed for so long with his regenen had not recovered from its recent extinguishing. “You forget yourself, Lord Gael. Every office within Belzetarn is mine to fill as I will and when I will.”

Gael knew he should drop the matter, but somehow he could not. He had liked Dreas himself, seeing in the march an older Arnoll, seeing himself and Arnoll in Carbraes and Dreas. The regenen’s swift recovery from the death of his friend seemed a betrayal of that friendship. Dreas had been honorable, loyal, almost a paladin, if any troll could aspire to such. Dreben was greedy, power-hungry, and violent. How could Carbraes set him in Dreas’ place?

“You defile Dreas’ memory by your choice of Dreben!” Gael snarled, appalled at his unwisdom, but unable to stay silent.

“Do you court your own death?” asked Carbraes, an edge to his calm tone. “For if you do, I am well able to supply it.”

Gael got a hold of himself. “I beg your pardon, my lord Regenen. My grief for Dreas makes my speech wild and overbold. And”—Carbraes had always valued frankness; surely he could not have changed so much—“Dreben and I have never been friendly.”

Carbraes’ expression softened. “All Belzetarn shall miss my best beloved. There was no one like him, never will be again,” he said gently. “Your sorrow at his passing does you credit, Lord Gael. You have my forgiveness.” Carbraes’ gaze sharpened, and his tone grew sharper with it. “I trust you will find yourself able to respect Lord Dreben, despite your former differences.”

Gael doubted it, merely because Dreben would not fail to push matters, but telling Carbraes so could bear no fruit. “Yes, my lord Carbraes.”

That was dismissal, but Gael had not broached his business with Carbraes, even though Carbraes had finished his with Gael.

“Your messenger did not find me to bring me before you,” said Gael. “I sought you on another matter.”

Carbraes stiffened. “You cannot destroy the gong on the morrow’s morn,” he said, disapproval in his voice, “is that it?”

Gael and Nathiar and Arnoll would not be destroying the gong. That lay beyond the heat of Belzetarn’s forges. They would merely disarm the artifact. But now was not the time to remind Carbraes of the distinction. “No, my lord Regenen. The procedure for muting the gong is well in train. I came upon another matter.”

“Oh.” Carbraes relaxed. “Tell me your matter then.”

“Do you recall that before I departed for Olluvarde, I informed you that a thief had been stealing ingots of tin from your smithies?” Gael thought of them as his own smithies, but his ability to be politic had returned.

Carbraes frowned. “That shall be your next duty when you’ve melted down that cursed gong. Catching the thief.”

“I’d prefer to catch him this evening,” said Gael. “It could be done.”

“Who is he?” demanded Carbraes.

“If you are willing to lend yourself to the trap I’ve devised, I shall show him to you,” said Gael.

Carbraes stared an instant, then nodded. “Tell me what you require,” he said, his whole demeanor more friendly than it had been during the entire previous interchange.

Gael went over his plan, explaining the few pertinent details, while avoiding mention of whom he intended to catch. The regenen seemed intrigued with Gael’s provisions and pleased with the chance to take direct action in the matter. Perhaps he tired of always telling others to act while never doing so himself?

“You understand that the timing is critical?” Gael asked, concluding with that question.

“Then I shall see you shortly, my lord Regenen,” said Gael.

Carbraes sighed, a shortened huff of breath. “You were used to address me as Carbraes, Gael. From time to time.”

Gael directed an assessing glance at the regenen. Had he won his forgiveness? “I feared I had trespassed beyond your clemency, Carbraes,” he said, testing the informality.

“Dreas was the heart of my honor,” answered Carbraes. “I shall attempt to retain it in his absence, but already the challenge proves hard. You, too, value integrity, Gael. I’d . . . forgotten that. For an interval.”

Carbraes’ eyes hardened momentarily. “Though your notarius lacks your probity!” The regenen turned away to gaze out the open casement beside him, where a sliver of lake glimmered bluer than ever beyond the rampart below.

He glanced back over his shoulder at Gael again, his eyes softer in the wake of his surge of temper. “Forgive me?” he said, his voice matching his eyes.

Gael nodded, swallowing down the lump forming in his throat. The bulwark of the trust between himself and his regenen—missing from the moment of Dreas’ death—had returned, and it felt like when he’d stepped into his tally room this afternoon. It was Carbraes’ backing that made Belzetarn bearable.

Buy the book:
The Tally Master