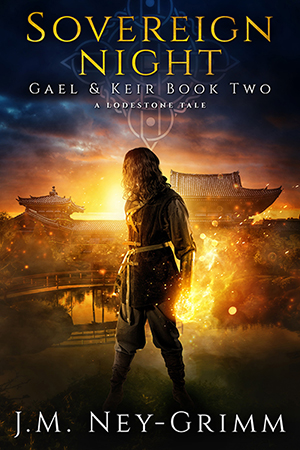 What dark secret lurks within the Glorious Citadel at the heart of the city-state Hantida?

Gael, an illicit mage, hunts redemption with Keir, a healer who helps all who cross her path. Gael loves her loyalty to her calling—and to him—but knows that mere friendship must suffice.

Together, the two seek a cure for the affliction that not only erodes their bodies and minds, but keeps them apart. The magical lodestone that holds their salvation lies hidden in the Glorious Citadel where the city-state’s sovereign dwells.

Posing as physician and physician’s aide, hired to preside over entertainments hosted within the Glorious Citadel, they find their quest for healing entangled with the corrupt and deadly undercurrents spiraling among the courtiers and servitors of the palatial stronghold.

The trail of clues—a would-be assassin startled from the shadows, twin handmaidens stealing from the library by night, and heavily-armed warriors called reavers smuggling kidnapped victims into the citadel precincts after sundown—leads toward the ancient artifact they need, but also to the risk of a horrific death.

Both Gael and Keir must learn honesty about who they love, who they hate, and who merits their championship, or lose not only each other but life itself.

Sovereign Night is the suspenseful second novel in the Gael & Keir epic fantasy series. If you like vivid characters, high-stakes mystery, and immersive world-building, then you’ll love this riveting adventure tale.

Buy Sovereign Night to discover the real treasure at the labyrinth’s heart today!

Sovereign Night is available as an ebook.
Amazon I B&N I iTunes I Kobo I OverDrive I Smashwords

Sovereign Night is available as a trade paperback.
Amazon I B&N I Book Depository I Mysterious Galaxy Books

She and Gael would never really blend in, despite Gael’s adoption of the most popular men’s hairstyle, and despite the fact that they both wore the local side-fastened robes with asymmetric necklines. At least Gael was not quite the flaring torch that was Keir herself, blond, gray-eyed, and milk-pale complected.

She glanced at him again, and this time he was looking at her.

His olive complexion was browner than she’d known it back in the north, no doubt because of the stronger southern sun, but his skin was healthy and firm, which gave her joy. Lines no longer bracketed his hazel eyes or his firm-lipped mouth, as once they had. His aquiline nose was well-proportioned, also unlike when she’d first worked with him. The strong, square bones of his jaw remained unblurred.

He looked the man he ought to.

The treatment she’d administered back in Belzetarn—nearly eighteen moons ago now—was holding, praise Ionan. If only the lodestone she’d wielded—a rare and magical artifact from the ancient past—were still hers to use. But it wasn’t. That lodestone had been ruined.

She straightened her shoulders. That lodestone had been ruined, but at least one other existed. And it was located somewhere in this city. That was why she and Gael were here. If they could obtain it, she could heal Gael and every other individual afflicted with his malady.

Whatever she had to do to obtain this lodestone intact—she would do it.

Gael lifted an eyebrow at her extended scrutiny of him.

Sovereign Night as an ebook: Amazon I B&N I iTunes I Kobo I OverDrive I Smashwords

Sovereign Night as a trade paperback: Amazon I B&N I Book Depository I Mysterious Galaxy Books