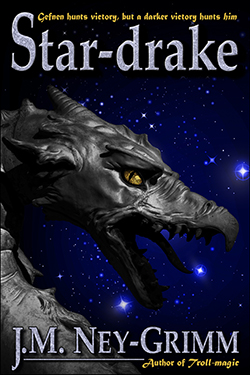 “The star-dragons and the wind sprites, her usual companions, could not visit her here.”

I wanted to know more about the star-dragons and the wind spirits with whom the rainbow played. Surely they would have missed her while she sojourned on the mountain, shut away from her native sky.

It felt like a story awaited me within that notion.

My concept of a wind spirit came from a snippet in Raggedy Ann Stories by Johnny Gruelle. Two little girls – sisters – lose their rag doll at the beach. He is rescued by the Tide Fairies who pass him to the Undertow Fairies and then on to the Roller Fairies and the Spray Fairies. At last the Wind Fairies carry him home to the little girls’ garden. A wonderful illustration depicts beautiful sea spirits surfing the whitecaps and tossing Freddy (the rag doll) into the sky. My wind spirits resembled them, I felt sure.

But what was a star-dragon?

I settled myself to meditate on the question, hoping for an answer. These are my notes: star-dragons are creatures of darkness who dwell in the blackness between the stars. They are emptiness. Shadow. Nothingness. They are the terror of these things, and they are the potential within these things. Nothingness has space for beginnings and newness.

The star-dragon in my story takes a terrible vengeance. He seeks out evil, strips it down to nothing, and re-creates it transformed: a newborn star-drake, destined to seek evil and transform it.

The final stone of Star-drake‘s story foundation lay with the travelers who engaged the rainbow near the end of Rainbow’s Lodestone.

Who were they? Where did they come from? I thought some more.

Emrys, the “ice-man,” was brother to the king of Tuisil-land, a small island kingdom far to the north. Emrys journeyed because he mourned and hoped to ease his grief in roaming.

Haral came from the Hammarleeding enclaves in the Fiordhammar mountains. He’d extended his wanderyar (the year of travel that most Hammarleeding boys take when they turn sixteen or seventeen) to continue studying duoja (magic) under the unusual tutelage of a Tromme-man, Paavo.

Paavo’s discipline of energetic shamanism is completely different from the Hammarleeding duoja, and Haral is fascinated by it.

The moors west of the Tahdenfiall mountains form part of Paavo’s regular ambit. He travels from settlement to settlement, much like a circuit judge, but he brings healing and insight rather than justice.

Tor and Lilli – grandson and grandmother – hail from Silmaren’s lowlands. They stumbled upon a worrying clue in their home hamlet and set off to track it down. I won’t say more here, because I envision a full trilogy stemming from their adventure!

Tallis I know the least about, possibly because she holds the most to know. She’s a salver, a healer, and is connected to Tor’s and Lilli’s quest. Yet she has her own problem to explore and resolve, one that will likely require the entire middle book of that trilogy.

With these elements – the winds, the star-drake, and the travelers – I was ready to begin, to move from dreaming to writing.

On the chance that my dreaming has inspired you to read Star-drake,
I provide the links for the ebook.

For more about the writing experience, see:
Behind Troll-magic
Writing Sarvet
Writer’s Journey

2 thoughts on “Dreaming the Star-drake”