I had a lot of trouble getting CreateSpace to honor the margins specified in my files for the paperback editions of Rainbow’s Lodestone and Star-drake. Then – margins sorted – the next proof copies featured the colors all wrong. It was all so discouraging, that I allowed months to elapse between wrestling bouts with the two books. Finally, in November 2014, nearly nine months after I started, the two books were ready to be approved and released! 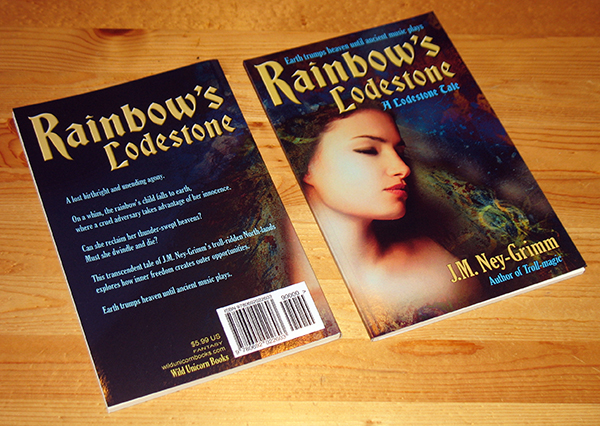 A lost birthright and unending agony.

On a whim, the rainbow’s child falls to earth, where a cruel adversary takes advantage of her innocence. Can she reclaim her thunder-swept heavens? Must she dwindle and die?

Rainbow’s Lodestone as a paperback:
Amazon.com I Amazon DE I Amazon ES I Amazon UK I CreateSpace

PRAISE FOR RAINBOW’S LODESTONE AND STAR-DRAKE

“…almost “Tolkienesque”…the stories feel like they’re happening on the Earth we know, but long before our recorded history… Despite the fact that it deals with a grim act of mischief, [Rainbow’s Lodestone is] a delightful read. The enchanting thing about it is the personification of the Rainbow, and the general attitude she has towards her fate in the story… All in all, these are wonderful stories… Ney-Grimm’s unique blend of Nordic fantasy and fairy tale mentality is a refreshing take on the genre, and [her] poetic style of writing (whichever tone she uses) adds a special sheen to the work. I read a lot of fiction, and I can honestly say I’ve not come across anything quite like this.” – James J. Parsons, Speaking to the Eyes 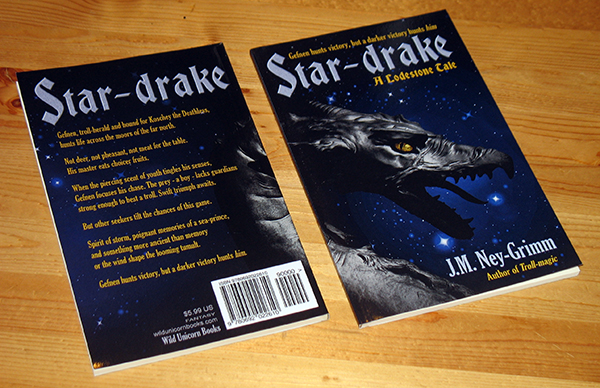 Gefnen – troll-herald and hound for Koschey the Deathless – hunts life across the moors of the far north.

Not deer, not pheasant, not meat for the table. His master eats choicer fruits.

When the piercing scent of youth tingles his senses, Gefnen focuses his chase. The prey – a boy – lacks guardians strong enough to best a troll. Swift triumph awaits.

But other seekers tilt the chances of this game. Spirit of storm, poignant memories of a sea-prince, and something more ancient than memory or the wind shape the looming tumult.

Star-drake as a paperback:
Amazon.com I Amazon DE I Amazon ES I Amazon UK I CreateSpace