When Mercurio throws a banquet in my novella, Devouring Light, his guests dine Roman style.

I’d always envisioned the ancient Romans as reclining while dining, propped up on couches with low tripod tables at their elbows. But when it was time for me to write the feast scene, I needed details. So I dove into research!

And discovered that my vision was somewhat mistaken!

The video below is what I’d imagined.

Certainly there are museums with replicas that look somewhat like that. One even features the individual tables I’d envisioned. While that may be accurate for meals with three people only, the scene looked rather different when more people were gathered.

A klinē is a sort of slanting couch, with the foot ten degrees lower than its head.

The houses of the ancient Romans usually had at least two triclinia. Elite households might feature four in a triclinium maius . 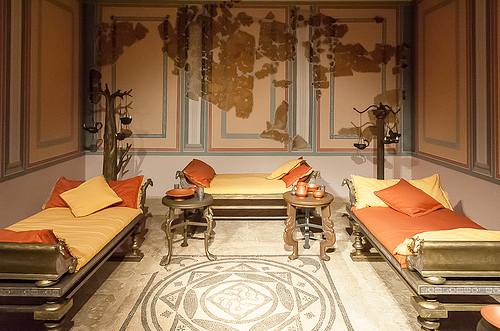 But, here’s the thing that confused me.

The ancient Romans commonly invited between nine and twenty guests to their feasts.

How on earth would they squish three reclining diners on each of those narrow couches? They would have to sit, not recline. And I knew they didn’t. Or I thought they didn’t.

Once I’d located some more scholarly works, I discovered there was more variation among Roman dining styles than I’d supposed. Specifically, the ancient Romans were people with individual habits, just as you and I have our own idiosyncrasies.

Sure, the reclining habit was a mark of status. Undoubtedly, most eaters started off that way, just to show they could.

But what about the child who couldn’t lie still? Or the lady with a bad back? Or the senator with a dyspeptic stomach?

Well, the likelihood that people shifted their position a fair bit while eating was only common sense.

But it still didn’t explain how they fit three reclining diners on those couches.

Finally I found another visual, and it all made sense.

I couldn’t find an image in the pubic domain that I am free to post here. But check this link, if you want to see the visual for yourself.

Mercurio gives each of his guests a unique klinē garnished with flowers, rather than grouping them on shared couches. The major “celestials” in Devouring Light happen to number eighteen, perfect to exactly fill two triclinia. How convenient!

This was Mercurio’s seating plan for them until . . . he realized he needed to accommodate an unexpected guest! 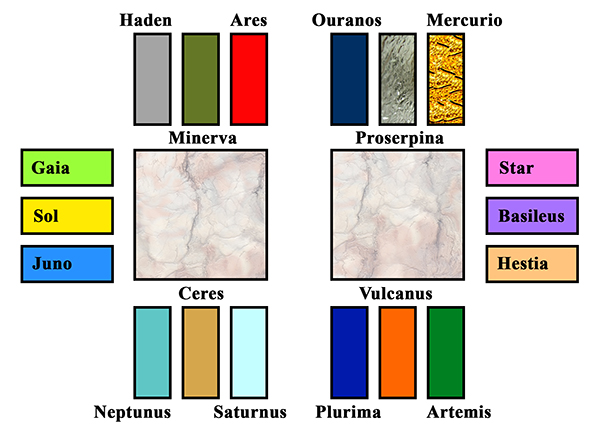 For more about the world of Devouring Light, see:
The Celestial Spheres of Sol
What Do Celestials Wear?
The Graces
The Heliosphere
The Oort Cloud
Mercury the Planet
Draco the Dragon
The Simiae