Mercurio, the protagonist of Devouring Light, tends the planet closest to our sun.

I envisioned Mercury as a heat-scorched ball of rock, but I hoped to report on some of its interesting quirks as I told my story. “Does it possess any?” I wondered. Somewhat dubiously, I must admit. 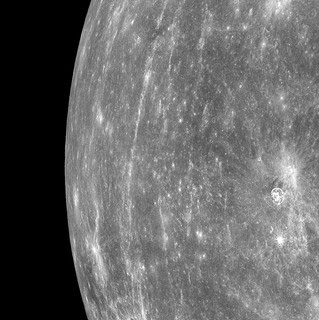 I needn’t have worried. The universe is a quirky place, and Mercury is no exception. It abounds with quirks.

One of the coolest things is its huge, liquid iron core. For a long time astronmers assumed Mercury was a solid ball of rock, like our moon. Nope. Mercury’s core is not only molten, but large compared to the size of the planet.

Why is it so large?

While the sun was forming out of a giant whirling cloud of dust and gas, the planets were forming, too. But the dust cloud traveled around the sun a little more slowly than the coalescing planets. The cloud, particularly dense near the proto-sun, dragged away many of the lighter elements in Mercury’s orbit, leaving it with lots of heavy iron.

Why is it still liquid?

Tides caused by the sun!

Its core has cooled a little bit over the billions of years that have passed since the planet’s birth, however. How do we know? Mercury’s surface is striped by numerous narrow ridges called rupes. They were created when the core cooled just enough to shrink a little. The crust – already solid – wrinkled.

It’s that molten core combined with the close proximity to the sun that again creates an unusual phenomenon. 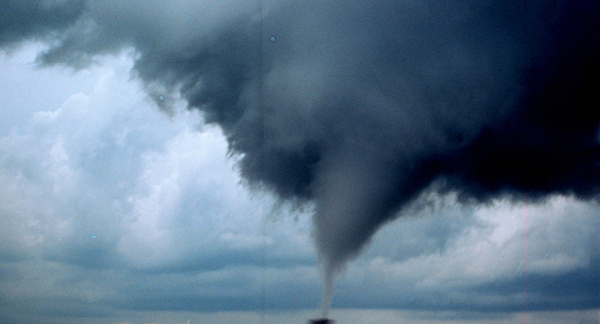 (Yes, the photo above shows a tornado of wind, not magnetism, but you get the idea!)

The large, liquid iron at the core – spinning as it does – means that Mercury possesses a strong magnetic field. Strong enough to protect the surface from the solar wind, just as Earth’s magnetosphere protects us.

At the center of the tornado is a window open to the full force of the sun’s blast.

Apparently Earth has these magnetic tornadoes as well, but those on Mercury are bigger and happen ten times more often.

Mercury has ice at its poles!

With surface temperatures between 530º F and 800º F, how is this possible? And, if it has polar caps, why don’t we see them? 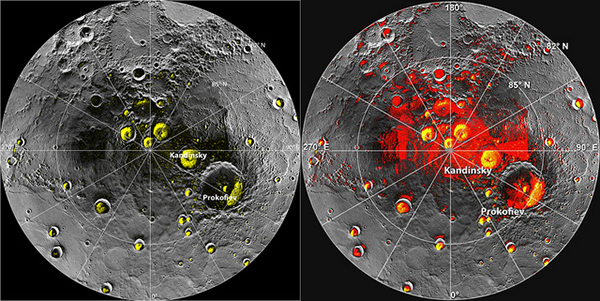 Well, first of all, not all of Mercury is hot.

The planet doesn’t have the axial tilt that Earth does. It spins nearly straight up and down. (At a tilt of .027 degrees, it has the least tilt of every planet in the solar system. Uranus, with a tilt of 98 degrees, has the most.) The angle of the sun is steep at the poles. And there is no atmosphere to spread the heat around.

So the poles are cold at -135º F. It’s even colder at the bottom of the craters at the poles: -276º F. And that’s where the ice is. Not a lot of ice. About enough to cover a square that’s 8 miles per side with 2 or 3 miles of ice. But ice nonetheless! And it’s shiny. Reflecting light that’s visible from space, when you use a big enough telescope. 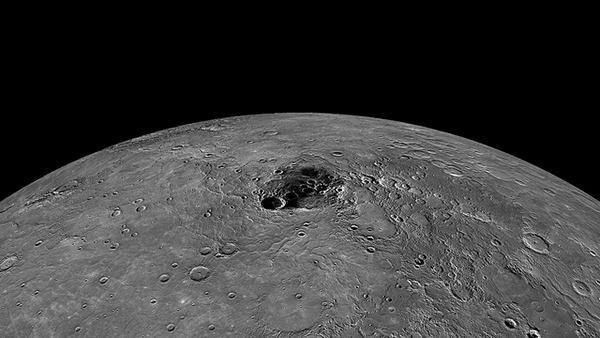 Now for that third cool fact.

But they’re not volcanic. In fact, Mercury’s volcanic days are long gone, a billion years in the past. So how does it have hot spots?

Mercury’s slow rotation on its axis combines with its quick journey around the sun to produce them. Here’s how.

Mercury spins 3 times on its axis for every 2 times that it travels around the sun. It’s got one heck of a long day! And at perihelion – when it’s closest to the sun – high noon lasts 16 Earth days.

At perihelion, Mercury is traveling so fast around the sun (faster than at the most distant point in its orbit, aphelion) that its own spin can’t keep up. The sun burns down on one spot – high noon – for more than 2 Earth weeks! That makes a hot spot. And one Mercury year later, the opposite side of the planet receives that 16-day high noon. Another hot spot!

I still have trouble wrapping my brain around that one, but wow!

Merucury features yet more cool quirks. Its exosphere. The Assyrian and Babylonian astronomers who first observed it. Why modern astronomers before 1965 thought Mercury spun once on its axis for every one circuit around the sun.

I wish I could have crammed them all into Devouring Light! But story comes first when I’m writing fiction. The hot spots made it in. The magnetic tornadoes and the polar ice did not. Nor any of the other fun facts. But I’m sure glad the story prompted me to learn more about our inmost planet. I’d no idea it was such a fascinating place.

For more about Mercury, see these articles at Wikipedia:
Mercury
Mercury’s Exosphere
Exploration of Mercury

For more about the world of Devouring Light, see:
The Celestial Spheres of Sol
What Do Celestials Wear?
The Graces
Roman Dining
The Heliosphere
The Oort Cloud
Draco the Dragon
The Simiae

4 thoughts on “Mercury the Planet”