How? It was his illustrations for East of the Sun and West of the Moon that did the deed.

I’ve told the story of how I discovered my creative process in an earlier post. Strangely, I’d engaged in my creative process for decades without recognizing it for what it was. Which meant that when I attempted to make the switch from one type of creativity (game design and graphic design) to another (narrative fiction), I didn’t know how to go about it. I tripped and fell.

Dorothea Brande’s Becoming a Writer sorted out my thinking. Ready to give my old ways a new try, I needed inspiration. 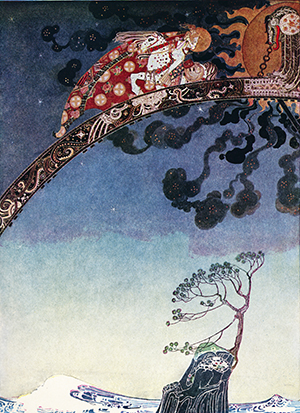 Kay Nielsen’s illustration in the title story of East of the Sun – captioned “And flitted as far as they could from the Castle that lay East of the Sun and West of the Moon” – came to mind almost the instant I began the meditation that kicks off most of my writing.

Now, I adore that painting, but I resisted it as the inspiration for my tale. Why? Mainly because I thought one of the quirkier works in the collection might make a more unusual starting point. And unusual appeals to me.

Fortunately my inner storyteller refused to budge. The story of the lassie carried away by a white bear is a great one, and Nielsen’s illustrations for it – both black & white line drawings and color paintings – utterly beguiled my imagination.

As I mused, my North-lands were born along with cursed Prince Kellor, half crazy in the darkness during the night when he regains his man’s form. That first scene – Kellor struggling to think clearly – almost wrote itself. And you know the rest: I completed and published Troll-magic.

Then I wrote about Sarvet, a character with one small walk-on part in the second-to-last chapter of Troll-magic. And then I wrote another story about the Hammarleedings, Sarvet’s mountain people. I suspect I’ll be writing stories in my North-lands for a long time. All because of Kay Nielsen.

As well as being the creative inspiration behind my fantasy world, his work also appears on my web sites and graces the covers of three of my books. I stand on the shoulders of a titan.

So I want to tell you a little about him.

First, his name. As an English speaker, I would naturally pronounce Kay to rhyme with weigh or inveigh or, more simply, may. And I would be wrong. It’s pronounced “Kie,” rhyming with pie or vie. (Yes, I’ve always liked rhyming games. 😀 ) Nielsen is more straightforward. “Neelsun.” 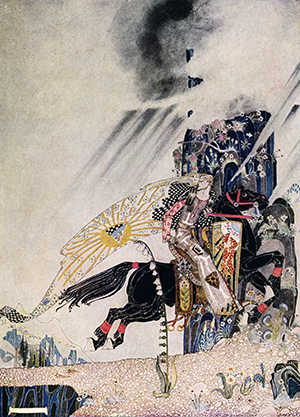 So, Kay Rasmus Nielsen was Danish, born in Copenhagen in 1886. His parents were actors, his mother a very famous one and his father the director of the Dagmar Theater. He studied art in Paris, then lived in London, where he received a commission from a British publisher to illustrate a collection of fairy tales.

No, this wasn’t East of the Sun, the collection of Norse folk tales. Titled In Powder and Crinoline, it included more continental stories such as “The Sleeping Beauty” and “The Twelve Dancing Princesses.” Nielsen’s illustrations featured courtiers garbed in sweeping ball gowns and cavalier coats along with towering white wigs. Cool stuff! I’m thinking I might try to acquire a copy.

The commission for East of the Sun came the next year, to be released in 1914. Both books utilized the new four-color process of printing to wonderful results. The previous method – three-color process – tended to produce darker colors that looked dirty and muddy. Kay Nielsen’s color plates possess clear, true tints from light to dark.

Of course, these commissions weren’t the whole of his professional life. He created scenes from the life of Joan of Arc, he painted landscapes in Dover, he traveled to New York for an exhibition of his work. He painted stage scenery for the Royal Danish Theater.

In 1924, he returned to book illustration with color plates and monotones for Fairy Tales by Hans Christian Andersen and Hansel and Gretel and Other Stories by the Brothers Grimm.

In 1939, he worked in Hollywood, eventually landing a job with Disney! I’d no idea, back in my childhood when I read and re-read East of the Sun, that the illustrator of those marvelous old-fashioned pictures was involved in something so modern as the movies. The “Ave Maria” and “Night on Bald Mountain” sequences in Fantasia were his work. He grew famous in the biz for all the concept artwork he did for Disney films. 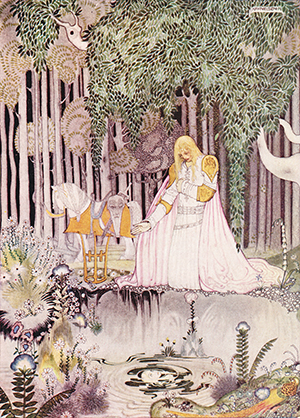 Sadly, all the beauty and genius of his work did not secure honor and security for his old age. His illustrative style fell out of fashion, and he died in poverty in 1957. He deserved far better. He delighted my childhood, as I imagine he did for many who read the books he illustrated or saw the movies he influenced. He sparked my own creativity. I see him as one of the greats of history.

Live long in our admiration of your art, Kay Nielsen!