I’ve been writing up a storm lately.

I finished a revision draft for Hunting Wild (a North-lands Story) at the end of the summer and sent it off to my first reader. I completed a first draft of Winter Glory (in the Kaunis Clan Saga) at the end of October, and sent that off for beta reading. Now I am hard at work on Caught in Amber, about halfway through.

All the writing has been immensely satisfying, but I continue to work on the publishing tasks that go along with being an indie publisher.

I’m working on a cover for Serpent’s Foe. The story is included in the anthology Quantum Zoo, but I plan to release it solo as well (which means it needs a cover). Some readers prefer their short stories in anthologies and collections. Others like to pick them up one by one, choosing only the exact ones they want. (The single versus the album.) I like to please every variety of reader. 😀

I’ve also been working on the cover for Hunting Wild, and that’s what I wanted to show you today. I had a lot of fun making it, and I think the result is pretty cool. One of these weeks I’ll do a “building cover” post to show you what went on behind the scenes. It was pretty involved! 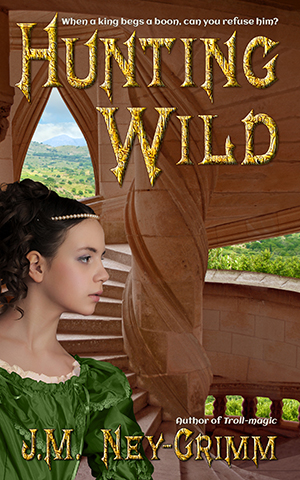 Here’s a little bit about the story.

When a king begs a boon, can you refuse him?

Her king requests that she retrieve a dread secret from the well on the grassy hillside of his castle’s outer bailey, and she complies.

From the moment her sovereign grips the unwholesome treasure in his hand, the coherence of his mind, his court, and his kingdom start to unravel.

Remeya claims the task of setting wrong to right, but the king’s madness erodes every good thing remaining, even while her own determination brings neither sound strategy nor success.

Only when King Xavo condemns his sister to death does Remeya consider a most unlikely resource.