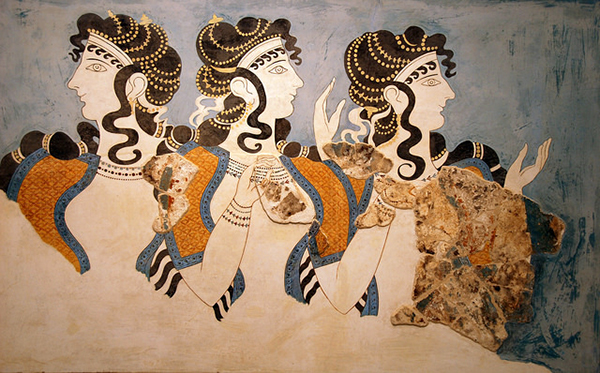 I’m currently writing a story about a sea nymph of ancient times who becomes handmaiden to the three fates.

The story keeps growing on me. When I first wrote the opening for it in 2013, I thought it would be a short story. When I decided to go beyond the opening and complete the work, I thought it was more likely a novella, perhaps 20,000 words.

After I started writing it this January, I realized it would be a longish novella, perhaps 35,000 words. 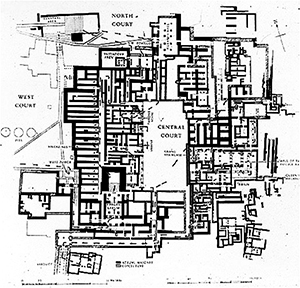 And once I was well into the project, and had expanded the outline, I knew it would be a novel. Anywhere between 50,000 and 80,000 words. Yikes!

But I want to tell this story right, which means I can’t skip those middle scenes that hadn’t seemed necessary when the idea for it first sprang. One of the advantages of the indie world is that the writer can allow the story to go to the length it needs.

So I’ve been writing Fate’s Door for 5 weeks now, and I’ve discovered another element that makes this a challenging project. It’s the most research-intense book I’ve written yet. 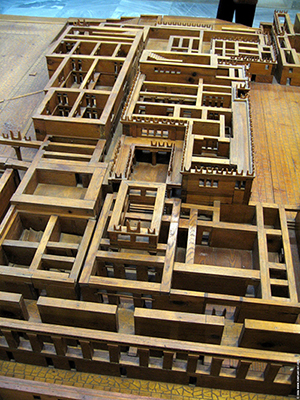 When the scope of the narrative was confined to the northern cottage of the three fates, I had to research looms and spinning and other details about textiles. But that was all.

Now that I’m including events from my protagonist’s life before she came north, I’m needing to research much, much more. Coral reefs, fossilized coral reefs, marine life, islands in the Mediterranean, history of the ancient world, and so on.

I find it all fascinating. (You knew I would!) But wow! Every time I start a new scene I realize I need to know some additional tidbit in order to write it properly.

My latest foray into research concerned Knossos, the palace on Crete built in 1950 BCE. My heroine grew up in a fringe reef off the coast of a Mediterranean island near Tunisia. She soon goes ashore and encounters the land folk who live there. Which meant I needed to know more about them.

I had already decided that even though the time frame of my story is more eternal than chronological – because it’s about the numina of the ancient world, gods and goddesses of the waters and the archetypes – it still takes place within the framework of history, during the time of Alexander the Great.

But the island where my heroine goes ashore is far from the battles of Alexander’s great conquest.

I decided to model my Zakynthians after the Minoans of Crete. Perhaps they were a remnant of Minoan civilization that had survived the downfall of Knossos on Crete. Like the earlier Minoans, they were seafarers and a power on the water. They built fleets of warships to protect their realm. They built another fleet of trading vessels. And they grew rich. 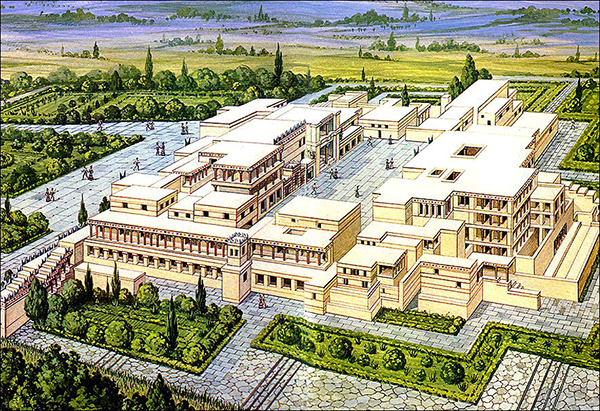 Their palace would be modeled on ancient Knossos, one of the most magnificent buildings of the older world.

So I researched Knossos. It was, indeed, impressive.

The palace took up 6 acres, with many corridors and small inner courts all arranged around one great central court. An aqueduct from springs on a mountaintop 6 miles away supplied it with water and actually ran fountains with the water pressure. Pipes from the aqueduct brought running water right into the palace. 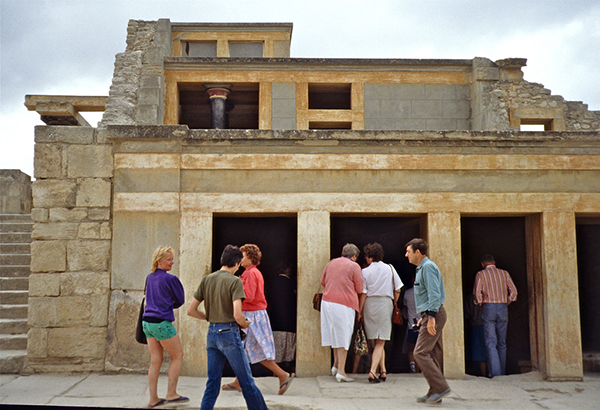 The palace was constructed of limestone using a post-and-lintel system. Tree trunks formed decorative pillars. Squared off wooden beams created decorative elements within the stone walls, as well as outlining doors and some windows. Light shafts brought light and ventilation to interior rooms.

A red wash colored the stone floors, and frescoes adorned the interior walls. The queen’s chambers included a toilet that was flushed by pouring a pitcher of water which cleared the basin and ran out into a separate sewer system. The Minoans of Knossos had advanced water handling skills! 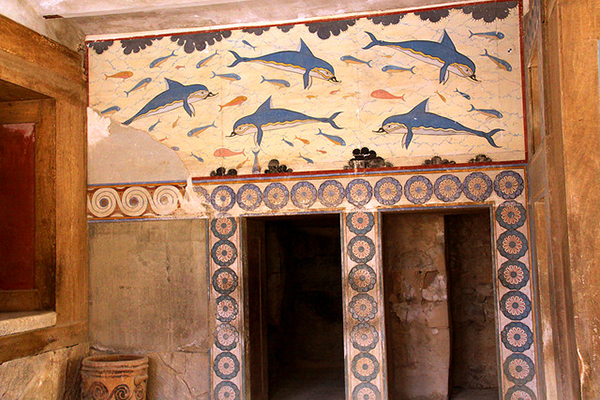 The palace was much more than a royal residence. It did house the royal family, but it also served as the seat of government for the adjacent city, the center of commerce, and the hub of religious life. The complex included a theater.

Extensive food storage and processing workrooms made up a large portion of Knossos. There were grain mills, olive oil presses, and wine presses on the premises. And a multitude of storage “magazines” held massive urns (or pithoi) in pits, so that the opening was at floor level. Olives, olive oil, dried figs and dates, honey, grain, wine, and dried beans are some of the staples stored in these urns. When they were full, they weighed tons. 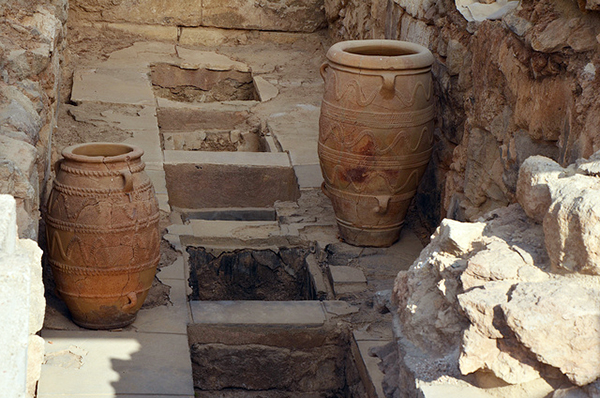 I sometimes wish I could visit the past to experience places like Knossos. No doubt that’s part of the charm of time travel novels for me. 😀

If you could visit a time and place out of history, what time and what place would it be?

For more about the world of Fate’s Door, see:
Horse Sandals and the 4th Century BC
Measurement in Ancient Greece
Garb of the Sea People