The protagonist of Fate’s Door – Nerine – is a sea nymph. She would call herself a numen of the sea, a sea spirit.

She can breathe air, but her natural breath extracts oxygen from water, and her home is under the sea.

Fully half of Fate’s Door takes place in the Mediterranean. (Nerine would call it the Middle Sea, of course.) A lot of Nerine’s early adventures occur on land, on the island near her reef palace home. But the root to her problems lies with her family, in the sea, and many scenes transpire underwater.

Which meant I needed to devise what Nerine and her people wore in their watery realm.

It seemed obvious to me that sea people must wear close fitting garb that doesn’t get in the way as they swim about their business. Likely they would fashion clothing very much like our modern swimsuits. But I didn’t think they would call them swimsuits or bathing costumes or anything like that. Those terms belong to people who enter the water but occasionally. Only land dwellers would wear a garment that is a ‘costume’ or ‘for swimming.’

Sea people swim most of the time, and their garments would just be clothes. Yet they’d need specific terms for each garment. I decided to go with the ‘pectoral’ of the ancient Egyptians for the top. And the term ‘belt’ for the apparel covering the loins. A girdle might be more accurate, but in my mind a girdle calls up either medieval times or the 1950’s. I wanted something more basic. So, belt. 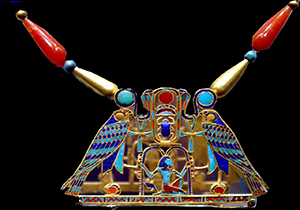 We moderns tend to think of the Egyptian pectoral as elaborate jewelry, but its primary purpose was to make a statement about the pharaoh or noble wearing it. For example, the pectoral of Amenemhat III states: “Lord (of) Heaven, God-Good, Lord of the Two Lands, ‘Ny-Maat-Ra’, Lord (of all) Lands.” 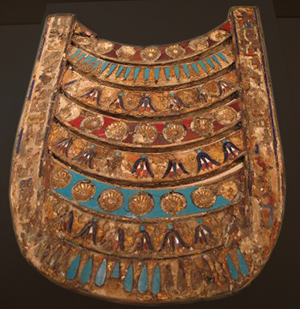 The votive pectoral of Ptolemy V (right) is more what I had in mind, but it was never worn by the living pharaoh. Rather it was placed on his corpse, and its shape mimicked the shape of a beb-collar, that hung from the prow of a sacred boat, protecting both boat and the image of the god carried within.

Additionally, the Eyptian pectorals were held in place by gravity. One worn in the sea would move around too much, unless fastened around the torso as well as the neck.

By adjusting historical precedent to conform with the demands of practicality, I arrived at my ideal for a sea numen’s pectoral: a decorative panel, made of varying materials, secured behind the neck and around the ribs or waist.

The warriors would need garments of sturdier stuffs, perhaps links of bronze to form a mesh, or chitin harvested from the shells of giant crabs and reinforced by a coating of bronze.

I discovered a Dutch gorget (below left) from the 1600’s that matched quite well with the picture in my mind. Perhaps the sea warrior would need more room about the neck, but his arms would have plenty of freedom for swimming strokes as well as thrusting with a spear or trident. 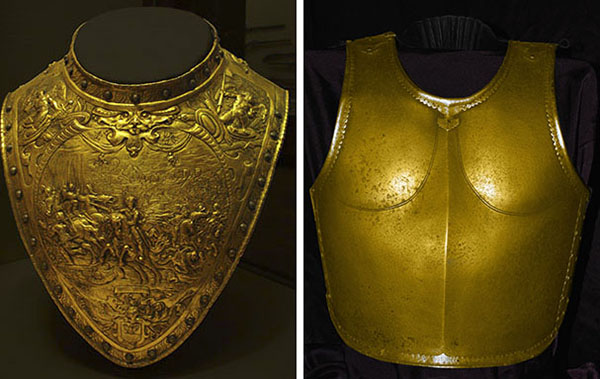 I envisioned Nerine’s father, the king, wearing something that covered a bit more of his person, something like this Indian cuirass from the 17th or 18th century (above right), but with more room for the arms. 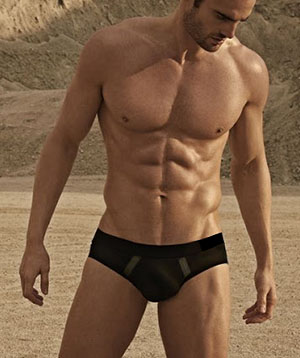 And just to be clear that a sea person’s ‘belt’ coveres rather more than one might initially expect, I decided I’d better find a photo – somewhere – giving an indication of what I meant.

I imagine something similar could be devised of crab chitin or bronze chainmail for the warriors. Although the sea people know the technology of nålbindning, single-needle knitting, which goes back to the earliest of times.

Indeed, most of the servants in the reef palace would wear pectorals and belts knitted from sea jute, thin strands of chitin or urchin spines, or even their own hair (which is not itchy the way a land-dweller’s hair is). The lighter materials delivered more comfort than the heavier ones required by the warriors. 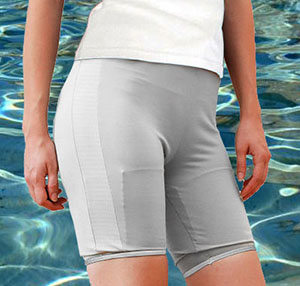 Nerine’s Nurse wears a snuggly fitting top and hose of white nålbindning knitting. And Nerine’s first clothes – worn at a formal banquet with her parents, the king and queen, as well as some of their courtiers and ministers – is an aqua nålbindning top and belt. For the children of the sea people do swim bare, donning clothes when they reach the age of thirteen or so.

The royal children receive more ornate garments, usually adorned with jewels, and fashioned of a light bronze or gold mesh. Nerine’s favorite pectoral and belt were gold with green beryls that flashed gold in strong sunlight. They complimented her green-gold hair and hazel-green eyes nicely. 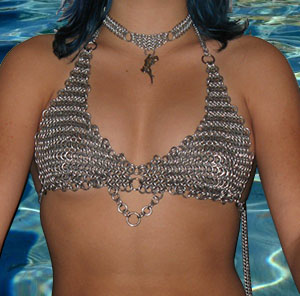 The belts of the ladies, like those of the men, covered more than the term ‘belt’ might lead you to believe. Not all of them would resemble bikini bottoms, however. Nerine’s first ‘belt’ was merely a very long sash of aqua nålbindning that wrapped around her waist and passed between her legs, being secured in elaborate knots on the waistband. 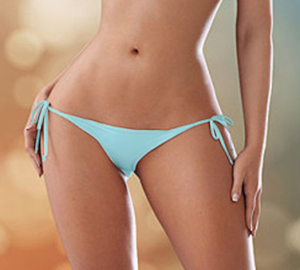 Nearly every painting I’ve seen depicting water nymphs shows them naked, but I suspect that the real intent of the painter was the celebration of the beauty of the nude form. The nymphs are certainly lovely.

But all the statuary showing land dwellers in the nude doesn’t mean that they went about their lives unclothed. Supposing sea numeni were real (as my novel, Fate’s Door pretends), I doubt they would live always in the nude either. 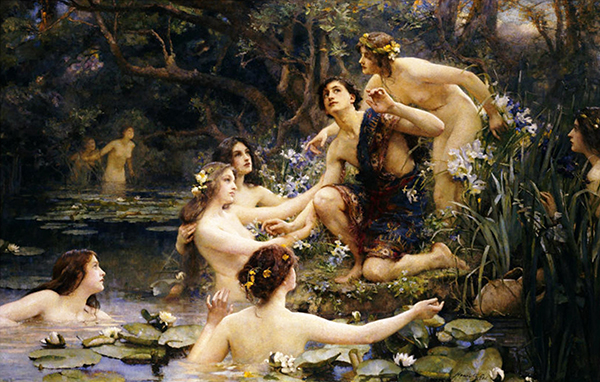 2 thoughts on “Garb of the Sea People”