On a Thursday afternoon, I’d just arrived in northern Virginia to attend a memorial service. As I washed my hands in the restroom, I noticed three black dots floating along the upper left field of my vision.

For a moment I thought I’d moved the scarf of black lace from my neck to my head, and that the fringe of lace on the scarf’s edge had drooped too low. I touched my fingers to my collarbones. No, the scarf was at my neck. 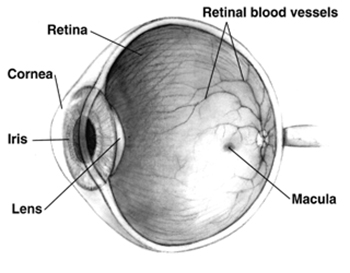 Then I knew. These were floaters: not the filmy gray spots that I’d occasionally experienced before, but more concentrated versions of the same thing. Floaters drift in the vitreous humour, the gel that fills the eye, and cast shadows on the retina, the part of the eye that transmits light signals to the brain.

The fact that these new ones were solid black, not gauzy gray, worried me. But I was a 2-hour drive from home and I had a service to attend. After making a commitment to see my optometrist first thing the next morning, I turned my attention to my immediate obligations.

The floaters did not worsen over the afternoon, and I arrived home safely at 7 in the evening.

Dusk had turned to night while I drove, and it was only when I stepped into the light of my living room that I saw I had a new symptom: a flashing light that varied in color, sometimes red, sometimes yellow, most often blue.

My heart started to thump with fear. I knew this was not a good development. I checked online. Yup. A sudden increase or change in floaters combined with flashing light was a potential sign of a torn or detached retina. It could lead to blindness in 2 or 3 days, and the online sites recommended that one treat it as an emergency.

I went to the emergency room.

There I was diagnosed with a torn vitreous in my left eye. I’m still not entirely sure what a torn vitreous is. They didn’t explain it well at the ER. But I gathered that it was expected to heal on its own and that it did not threaten blindness. Researching after the fact, I found that the National Eye Institute has this to say about it:

“Most of the eye’s interior is filled with vitreous, a gel-like substance that helps the eye maintain a round shape. There are millions of fine fibers intertwined within the vitreous that are attached to the surface of the retina, the eye’s light-sensitive tissue. As we age, the vitreous slowly shrinks, and these fine fibers pull on the retinal surface. Usually the fibers break, allowing the vitreous to separate and shrink from the retina. This is a vitreous detachment.

The only bad part? While my eye healed, I was at increased risk for a retinal tear.

Still, good news. I went home with instructions to come back if my symptoms worsened.

Of course, you know what happened.

All of Friday, my symptoms lessened. The three black spots grew smaller and then disappeared altogether. The flashing light flashed less often. I kept my fingers crossed. I really didn’t want anything bad to happen to my retina. My eyesight is absolutely precious to me. I didn’t want to be blind in one eye. Please, please, please!

Just before I went to bed in the wee smalls of Saturday (1 AM), a sudden cascade of floaters appeared in my left eye, more than I’d ever seen before. But they were gray, not black. So what did this mean? I’d already had one false alarm. Was this another? What should I do? Go to the ER again?

I should have gone to the ER.

When I woke up the next day, the veil of gray floaters remained, and the flashing lights had changed to a solid peninsula of dark gray that sometimes blinked out to a medium gray or a light gray.

I went to the ER, where they diagnosed me with a torn retina.

I had an immediate procedure to repair the tear: not surgery, but a cryofreeze “stitching” of the torn piece back onto the rest of the retina. It was painful, but I’d do it again if I had to, because this way I get two chances to keep the vision in my left eye. If the cryofreeze procedure fails, I still have the surgery option.

I’d feared the numbing shot to my eye. Turns out that is nothing to worry about. They numb your eye first with very effective drops, and you look up when it’s time for the shot. The needle goes into the lower white of the eye where you can’t see it. And it feels like a momentary speck of dust in the eye. Not bad at all.

But the cryofreezing involved the insertion of a probe between my eyeball and the eye socket. The probe was then pushed quite far in, which was uncomfortable and unnerving. Your body just knows that nothing belongs in that space but your eye! But the numbing drops and the numbing injection kept it from being acutely painful. It was bearable. Just.

Once the freeze was instituted on the probe though… ouch! Bearable, but only barely. If only my retina hadn’t needed so much “stitching.” The doctor must have inserted that probe thirty times or more, and with each insertion I tired a little more, lost my ability to bear up a little more. The last 6 insertions were almost unbearable.

I hope I don’t ever have to go through it again, because it would be a lot harder with foreknowledge. I would want to do it (if necessary) to save my vision. And I would dread the discomfort and pain.

By the time my doctor injected a bubble into my eye – to stabilize the “stitching” – I no longer cared about unnerving and uncomfortable experiences. This time the needle went straight into the seeing part of my eye, and I almost didn’t mind, because it didn’t hurt!

My ordeal wasn’t quite done. My eyeball had suffered an abrasion during the procedure. This is common, but a scratch on the eye is one of the most painful kinds of pain. I’m not sure why my doctor sent me home with instructions to take 2 tylenol. I landed in the ER one more time, because I couldn’t take the pain.

They tried to control the pain with oxycodon, which didn’t even touch it. A shot of morphine finally took my pain level down from a 10 out of 10 to a 7 out of 10.

Fortunately, abrasions on the eye heal quickly. The pain subsided rapidly, was well controlled at home with the prescribed pain meds, and was gone altogether 3 days later.

I learned how to sleep sitting up (necessary to keep the gas bubble positioned properly over the repair to my retina). I developed stamina for reading with one eye. (My sight in the left eye remains blurry as I type this post, and the eye itself is too sensitive to keep it open.)

My first check-up occurred 12 hours after the cryo-procedure, and my docotor decided to reinforce the cryo-stitching with a little laser-stitching, which was uncomfortable only because of that abrasion.

My second check-up 2 days later, and my third, a week later, showed the repair to be holding perfectly. Yay! I received permission to sleep lying down on my left side after the fourth check-up.

I even hope I might be able to resume work on Tally the Betrayals (a Lodestone Tale) next week. I want to! I miss writing! But the aftermath of the cryopexy (as I believe the procedure is called) is not for sissies! So… one day at a time.

I won’t be sure that my retina won’t rip (a risk of cryopexy) somewhere else until my fifth check-up, at the end of February, but I am cautiously optimistic.

If you’re the praying type, I’d appreciate your prayers. (Even a hint that I could be permanently blind in one eye scares me silly.) If you’re the type who sends healing vibes, I’d love those, too. And if you prefer to simply wish me well, I’m down for that also. 😀

I’ll report back after my next check up.

4 thoughts on “My Torn Retina”