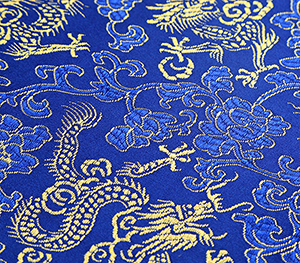 Before I learned about yunjin brocade, I’d assumed that my norns in Fate’s Door would weave upon a floor loom, something like the weaver I saw working in historic Williamsburg.

I hadn’t really thought through the process of weaving and the type of weaving necessary to the norns, creating the destiny of the world on their loom.

Floor looms can create beautiful cloth with some wonderful patterns. But the pattern has a limit to its complexity, and that pattern is repeated over and over again. 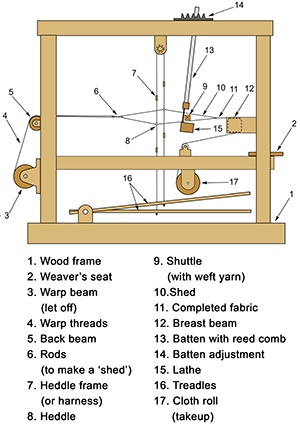 That would never work for the norns. While a larger theme or pattern might repeat through an era of history – the age of classical Greece or the time of republic Rome – the detail within that pattern would vary considerably. And when the world moved on, from ancient times to the Middle Ages, for example, the old pattern would vanish entirely, with a new one springing up.

A floor loom might have an array of heddles (which control the pattern of the weave), but once those heddles were threaded, the pattern for the fabric is unvarying.

My norns would need something more complex than a floor loom.

I read about dobby looms and jacquard looms and even modern power looms, but none of them possessed the kind of flexibility required.

Then I encountered yunjin brocade, woven in Nanjing, China for over 2,000 years. As I studied the textile samples, I saw that the patterns produced were more complex than anything I’d seen thus far. 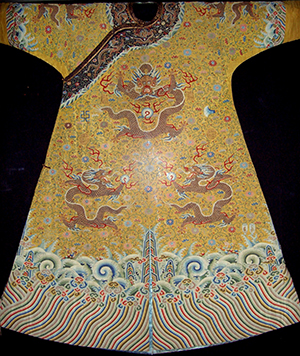 More interesting still were examples of emperor’s robes woven by the piece on the yunjin looms and then assembled from those pieces. They were not cut from the woven silk. Rather each piece was woven to the correct shape and size, ready to be sewn to the other pieces after each came off the loom.

Even more important, the patterns in these pieces changed throughout each piece. The hem of the sleeve might have one pattern, the length of the sleeve another, and the shoulder yet another.

Essentially, an ever-changing tapestry could be created by this ancient and intricate method of weaving.

I had found the loom my norns would weave at.

But, wow, was that loom a monster!

It measured 18 feet long, 4.5 feet wide, 13 feet tall (5.6 meters long, 1.4 meters wide, and 4 meters tall). It takes at least two people to use it. The weaver sits before the loom on a bench, passing the weft threads through the long warp threads. The picker sits aloft, picking different patterns of draw strings to create the openings in the warp threads (called “sheds”) for the weaver to pass the weft threads through. 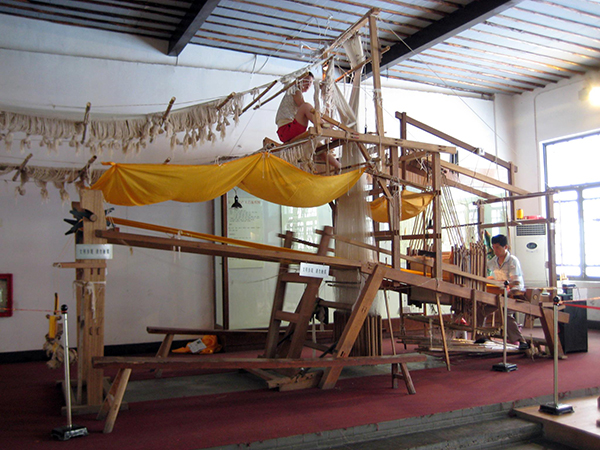 Because the norns must weave a wider cloth – they have the whole world to include – a third person is needed: someone to throw the shuttle when a thread must pass the whole width of the cloth. The weaver’s arms are not long enough to both toss the shuttle at one side and catch it at the other.

But the need for three was perfect for my story. The fates – whether they be the Greek moirai or the Roman parcae or the Norse norns – are always three.

I would have my weaver, my patterner (the picker), and my shuttle-catcher.

And it was appropriate that the loom of fate – the loom that wove the births and deaths and deeds of all alive – should be a “monster.” Any device with so much power should have something monstrous about it.

The video below shows a yunjin drawloom in action, as well as explaining some of the other intricacies of the ancient craft of yunjin brocade.

I found it fascinating! (But you probably already knew that I would. 😀 )

For more about the world of Fate’s Door, see:
Cottage of the Norns
The Norns of Fate’s Door
The Baltic Sea
The Ancient Goths
Lugh and the Lunasad
Crossing the Danube
The Keltoi of Európi
Vertical Looms
Names in Ancient Greece

For more about brocade and looms, see:
About Looms
About Brocade
About Yunjin
Saving Yunjin

4 thoughts on “Brocade and Drawlooms”