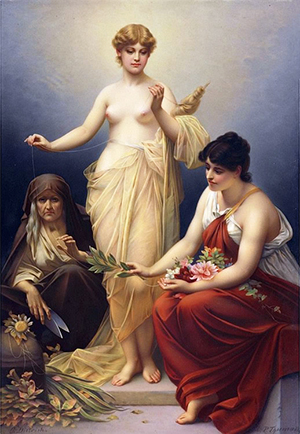 The first stages of dreaming up a new story, for me, usually start with the question, “Where?”

When I wrote Troll-magic, the answer to that question was, “The enchanting place I see in the paintings by Kay Nielsen.” I had to invent that world, of course, and it became my North-lands.

Fate Door began a little more strangely. I was trying a writerly trick known to spark stories a little different from what a writer normally comes up with.

Look around the room you are in. Pick an item that catches your attention. Use it to generate a story.

I’m not going to tell you the object that caught my eye. It would act as a spoiler, and I definitely don’t want to spoil my own story for you!

However, the object very quickly led me to my usual question, “Where?” The where was the cottage of the three fates. And the who was the sea nymph working as the fates’s handmaiden.

Once I got that far, I needed a name for my sea nymph. I decided to look amongst the names of sea nymphs mentioned in Greek mythology. There are hundreds of them! The nymphs in Poseidon’s harem. The nymphs in Tethys’ retinue. The nymphs who reared Hera as a child. And on and on. I made a list of the ones I liked best.

Most of them had meanings, many of the meanings quite similar. There was Romy ‘dew of the sea,’ Inara ‘ray of light,’ and Marilla ‘shining sea.’ But the one I chose was Nerine, meaning simply ‘sea nymph.’

Since the first scenes of my novel took place in the cottage of the fates, I needed names for the fates, a good idea of what the cottage looked like, and then I was ready to write.

I wrote the events in the cottage, and I discovered that I needed to take Nerine back into her memories and write about her childhood in the Middle Sea (the Mediterranean). So long as she stayed within the bosom of her family, her first name alone was enough. But when she ventured further afield, I needed more.

Since the Greek gods and their attendant nymphs were creations of the Hellene culture, I decided that my people of the sea would follow Hellene naming conventions. Which meant I needed to know what they were. My research took some persistence. I didn’t immediately find what I needed. Finally, after much digging, when my frustration was rising, I found the information I sought.

It described the Athenian convention, and the Athenian way seemed good to me, even if other city-states might follow a different variation.

An ancient Athenian would have three names. The first was a personal given name, such as Hypatia, meaning ‘highest’ or ‘exceptional.’

The second name derived from the father’s name. Thus, ‘child of Amyntas.’ (Amyntas means ‘defender.) ‘Child of Amyntas’ would be rendered as Amyntiou.

What does this mean for my heroine?

Her father’s name is Meren, and she lives in the region of Pelagie. Thus . . .

When Nerine meets Altairos’ restless older brother, Hilarion, he asks Nerine her name. She must answer in full. It would be improper not to. And my research – eventually – yielded up what she would say. 😀

Photo credit for the woodland surrounding the cottage above: Forest by Ian Britton, used under a Creative Commons license from FreeFoto.com.

5 thoughts on “Names in Ancient Greece”