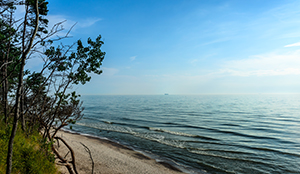 The Baltic Sea caused me all kinds of trouble in my writing of Fate’s Door.

First of all came the problem of what to call the dang thing.

I ran into this issue throughout the entire novel. The names from antiquity that get quoted everywhere are the ancient Roman names. There was the Mare Nostrum (Mediterranean) and the trireme (Greek trieres) and Karthago versus Karkhedon.

In some cases, I simply went with modern usage. Carthage. Why be unnecessarily obscure?

But Fate’s Door is set during the Hellenistic era when the ancient Greek world view dominated the Mediterranean. I found I often wanted the Hellene name for a thing. I usually had to dig for it. Lapadoússa, Európi, the Hyrcanian Sea, and so on.

But no matter how much digging I did, I could not find the Hellene name for the Baltic, if there even was one.

Reading about the etymology of “Baltic,” I could see that some version of “balt-” went back through many, many centuries. There was belt, used for two of the Danish Straits (The Belts). A legendary island (in the Baltic?) was named by Pliny (1st century AD) as Baltia. Pytheas (4th century BC – the time of Fate’s Door) named an island Basilia. 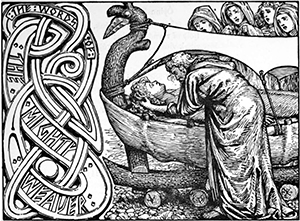 Other scholars insist that the name originates from the Indo-European root bhel meaning “white” or “fair.” A few Swedish historians believe it derives from the god Balder of Norse mythology.

But I noticed that the etymology of Balder possesses as confused a history as does Baltic. Baldr, baldor, baltas, balths.

I read up on the religious beliefs of the ancient Scandinavian peoples.

They seem to have venerated a sun mother, a spear god, a sword god, and an axe god, who later became Ullin (Mother Holle), Othinn (Odin), Ingr (Freyr), and Thunrar (Thor). Who is to say that there might not have been a forerunner of Balder as well? 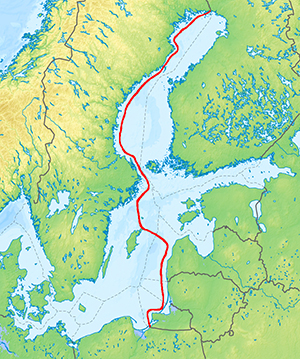 I decided to go with Balder’s Sea.

But naming this northerly body of water was only the beginning of my tussle with the Baltic.

I’d estimated that my protagonist Nerine departed Mount Olympus around June 7. Her journey across Europe was roughly 1300 miles, which meant that it would take her 87 days. That is, she would arrive on the southern shore of the Baltic on September 2. Was that too late for her final push north?

When did the sun rise and set in Gdansk in September? What about Kemi in Finland? When did the Baltic Sea ice over? 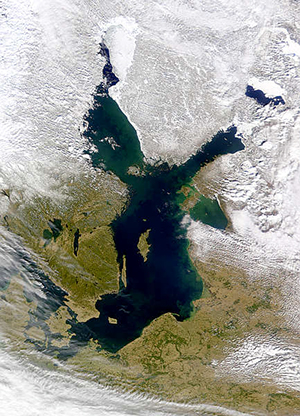 Why didn’t I ask these questions earlier? Aack!

Fortunately, my belated research gave me answers that meant I didn’t have to change the dates for Nerine’s departure.

One more question bore on the answers to those above. Just how was Nerine getting from the southern shore to the northern one?

It’s clear that the people of ancient Scandinavia had already mastered boat building. The Gutones (the ancient Goths) in what would eventually become Poland came from either the island of Gotland or from Sweden by boat. All the coastal settlements traded extensively, and that trade arrived by sea. The mountainous terrain of Scandinavia made travel by land very difficult and chancy. 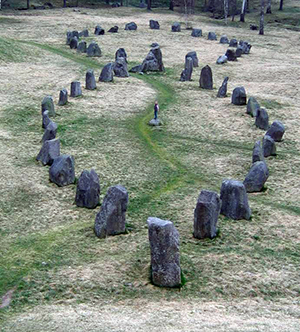 The cultural emphasis of the ancient Scandinavians on ships is reflected in a preoccupation with sea vessels. Stones outlining the shape of a ship surrounded the old burial mounds, symbolic ships to carry the dead into the afterlife. Their religious images depict the sun mother helped into the morning ship by a magical fish, carried past noon by a powerful sun horse and delivered to the evening ship, where a serpent helps the sun settle.

So Nerine would be going north by boat. But what type of a boat?

The earliest archaeological evidence we have for the vessels of ancient Scandinavia are the ships of Nydam Mose. The site was a sacred lake in the Iron Age, but became a peat bog, an excellent environment for preserving ship timbers. Archaeological digs unearthed three ships there, the largest and oldest made of oak.

The oak ship has been dated to 310 or 320 AD, a good 600 years later than the time of Fate’s Door. But I suspected that this ship could provide clues about the earlier boats.

For one thing, it did not have a sail, but was propelled by 30 oarsmen. That seemed particularly significant, since the later Viking ships did have sails, and its contemporaneous ships of the Mediterranean also possessed sails. 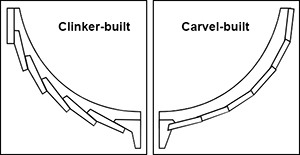 The Nydam Mose ship was clinker built. That is, the planks of the hull overlapped and were riveted together with woolen cloth to seal the seam. It would have been a significant innovation, if the Bronze Age vessels shared that design. Clinker ships are lighter and they can bend and flex, meaning that they withstand the battering of a storm-driven sea intact.

Interesting as I find these details, they weren’t directly pertinent to my story. How fast did the ship move, and how long would it take to row one from Gdansk, Poland to Kemi, Finland?

The oak ship of Nydam Mose was 75 feet long (23 meters) and 13 feet wide (4 meters). It was very close in size to the later Viking ships. And we know how fast the Viking ships were, both under sail and under oar. I would use the oar-driven speed for Nerine’s ship, the Saiwsgaitsa: between 5 and 6 knots (5.75 mph – 6.9 mph).

The Viking ships routinely travelled 75 miles per day, favorable winds or no.

At 6 mph, the Saiwsgaitsa would require 12.5 hours to go that far.

With 1100 miles to row, the sea journey would take 2 weeks. They’d make the northern shore by September 17.

On September 17, the sun rises in Kemi at 6:47 AM and sets at 7:44 PM. That’s just under 13 hours of daylight. The seafarers would be making a quick turnaround! They needed to get back south before the days grew too short. 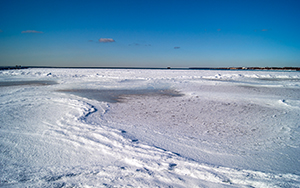 And before ice choked the water.

Ice begins to form in the northernmost reaches of the Baltic in mid-November. By late February, the entire northern half of the sea is frozen, with the peak of the ice falling in March. The thaw begins in April. By June, all of the ice has melted.

Just as experimental archaeologists made reconstructions of ancient Hellene merchant ships and ancient triremes, so did they create a reconstruction of the oak Nydam Mose ship. I wasn’t able to find a cool video of their venture, but in the course of my research on the ancient North, I discovered a wonderful video about Bronze Age Scandinavia.

At the time of Fate’s Door, the Bronze Age has just turned to the early Iron Age, but the dividing line between one era and the next is often much sharper in the history books than it is in the experience of the people who live through the change. I suspect that many facets of Bronze Age Scandinavia persisted into the first century of the Iron Age.

So take a look at these vignettes from the lands around the ancient Baltic Sea.

2 thoughts on “The Baltic Sea”