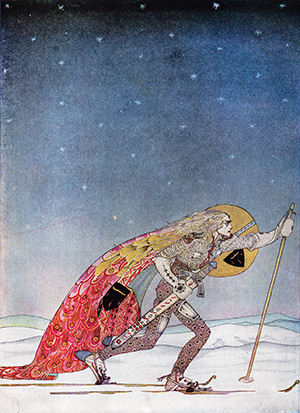 When I was getting ready to publish my novella Winter Glory, and was contemplating its cover, I longed to feature the illustration by Kay Nielsen captioned with: “So the man gave him a pair of snow-shoes.”

The skier depicted was tall and lean, just like my protagonist Ivvar. He even had grayish hair! (Also like Ivvar.) The landscape he skied through was the snowy arctic of the far north of my North-lands. And the illustration was beautiful.

I tried to convince myself that I could build my cover around it.

But the other two books in the series featured pen-and-ink illustrations – black-and-white, not color – and I really felt that I should keep the branding homogeneous. I started to sigh and resign myself. And then I had what seemed to me a wonderful idea.

I could put the color art on my light table and trace it with a drawing pen, thus creating a black-and-white version of the color piece that I loved so much. 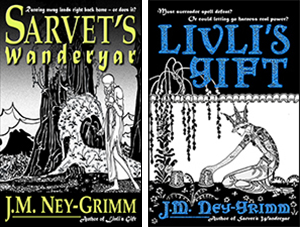 I’ll admit that I was really pleased with the result. So much so that I did not regret leaving the color illustration in my wake. I still find that black-and-white cover beautiful.

But as you may realize from my post about the new cover for Sarvet’s Wanderyar, I eventually realized that beautiful as the pen-and-ink work of Kay Nielsen is, it’s not the right art for my books and my readers. I’m replacing all of those black-and-white covers. Which meant I needed to revisit the cover for Winter Glory. 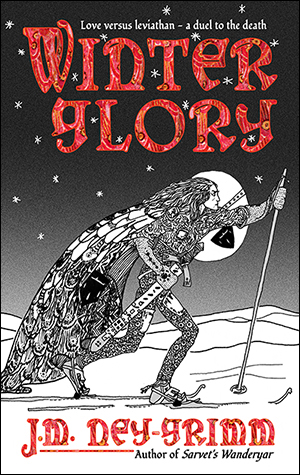 My first thought was to search the works of John William Waterhouse. I’d found something perfect for Sarvet’s Wanderyar amongst his portfolio. Maybe there would be something equally good for Winter Glory. But there wasn’t. Waterhouse seems to have painted mostly women. The few men in his paintings were decked out in ornate plate armor, and all of them were young.

Ivvar is in his eighties, and while he is a skilled hunter, he does not sally forth as a knight of medieval times. He wears wool and leather.

My next thought was to look through the works of the Pre-Raphaelites who influenced Waterhouse. There I encountered the same problem: mostly women, the few men presented as knights in shining armor. So, no. I would have to come up with another idea.

And it was only then that I remembered that, back at the vry beginning, I’d wanted to use the color piece by Kay Nielsen. Could I use it after all?

When I re-visited the image, I grew enthusiastic. I loved it as much as ever, and a vision sprang into my mind as to how I could marry it to the new trade dress I’d evolved when I worked on the new cover for Sarvet’s Wanderyar.

I set to work!

I must confess that I reveled in Photoshop, having more fun than seems really fair. 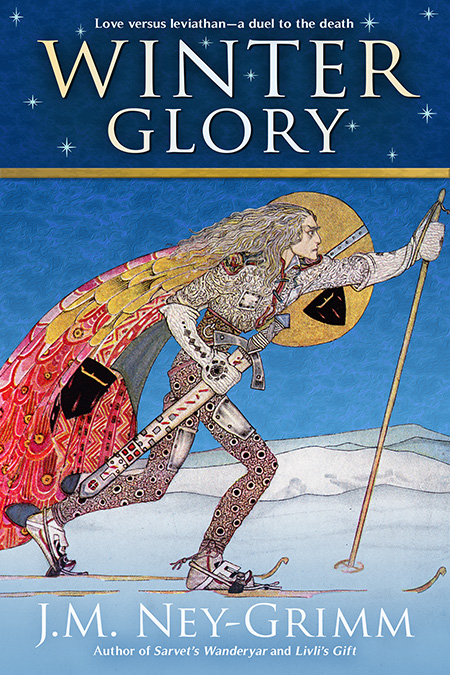 In the cold, forested North-lands – redolent with the aroma of pine, shrouded in snow, and prowled by ice tigers and trolls – Ivvar seeks only to meet his newborn great granddaughter.

Someone else has the same plan.

Traversing the wilderness toward the infant’s home camp, Ivvar must face the woman he once cherished and an ancient scourge of the chilly woodlands in a complicated dance of love and death.

Ivvar’s second chance at happiness – and his life – hang in the balance.

The new cover is available on the ebook editions at most online bookstores, although (as I type this) it is still wending its way through the distribution chain to Scribd and OverDrive.

Winter Glory as an ebook:
Amazon I B&N I Inktera I iTunes I Kobo I OverDrive I Scribd I Smashwords I 24Symbols

“A little atmospheric gem of a novella… interesting, beautifully written, and worth re-reading.” – Amazon review

“In the starkly beautiful North-lands – a place that Ney-Grimm conveys so clearly it’s like watching a movie on the inside of your skull – two people who once knew and loved each other meet up again. This is their story…” – Amazon review

“The descriptive language is nothing short of gorgeous… I love that the protagonists are older… and they stuck with me long after I had finished reading.” – Amazon review

“The writing is lucid, elegant, smooth. Ney-Grimm creates a fantasy world of Norse legends, but with real people…” – Amazon review

His gaze stopped on a woman sitting alone in the booth at the far left corner.

She wore Hammarleeding garb – wool tunic and leggings like his – hers drab in subdued ecru decorated by patterns of gray and white. She was bony, rangy, likely quite tall when she stood. And old, like him. She’d pinned her long iron-gray braid around her head like a coronet, and she held herself like a queen, straight and graceful as she sipped her cup of tea.

The frontiersmen began a rollicking ballad about bears dancing in the woods, and the Hammarleeding woman turned her face toward them.

Ivvar felt all the air punch out of his lungs.

She wasn’t beautiful, but she drew him. Lightly tanned skin like his own; straight nose, a little on the long side; flat cheeks. Laugh lines framed her firm mouth. Crow’s feet bordered her level hazel eyes. He suspected she’d reached that calm place where life was just interesting, neither a tragedy to be resisted, nor a passion to be exalted. But what was it about her . . . ? She looked genuine and . . . appealing.

The flutter in his innards grew.

Then lagging memory brought another face before his mind’s eye.

Like to the one across the room from him in the here-and-now. So like. But younger; fifty or more years younger. Jaw clenched, hazel eyes hot, and lips tight with anger. His linking-sister – what these lowlanders would call his wife. His former wife. Paiam.

The last time he’d seen her, angry at life itself more than at him, but telling him their linking – their marriage – must end.

How had she grown into this serene old grandmother?

The ebook links again for Winter Glory (I’m hard at work on a trade paperback edition that will feature the new cover):
Amazon I B&N I Inktera I iTunes I Kobo I OverDrive I Scribd I Smashwords I 24Symbols

6 thoughts on “A New Cover for Winter Glory”