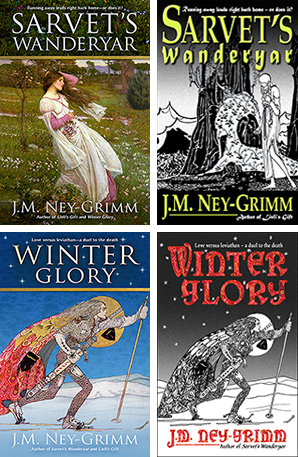 I’ve been on a cover tear, so perhaps you can guess what’s coming next. 😀

Sarvet’s Wanderyar once featured a pen-and-ink illustration by Kay Nielsen, but now it possesses art by John William Waterhouse – an oil painting in vibrant color.

Winter Glory, the other novella in the Kaunis Clan Saga, was adorned by a pen-and-ink rendition of Kay Nielsen’s northern skier. Now that ebook also features art in color.

My first sweep through the portfolio of John William Waterhouse did not turn up anything that grabbed at me. I considered his Annunciation (even did a mock-up with it), but had reservations about it. 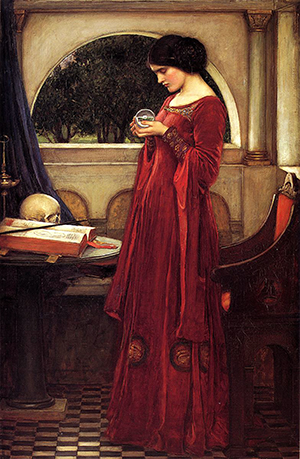 I worked on other things, while I pondered. When those things were finished, I revisited the Waterhouse portfolio. This time I saw something: The Crystal Ball. I suspect the artist may have been thinking about wiccan paraphernalia when he painted it. But another angle altogether comes to view when the painting is considered in light of my protagonist.

She’s a healer. In her culture, she’s the equivalent of a doctor. Which means that of course she studies anatomy, and like many people in the medicine of the past, she scrutinizes the physical clues that people leave behind, such as the skeleton. That’s what that skull is doing on the table in the scene.

The weighty tome is a medical text. And the crystal ball is not actually a crystal ball, but the sphere of light that she sees in her mind’s eye when she exerts her healing powers.

So…I had found the right piece of art. I opened up Photoshop and went to work. Check out the results below! 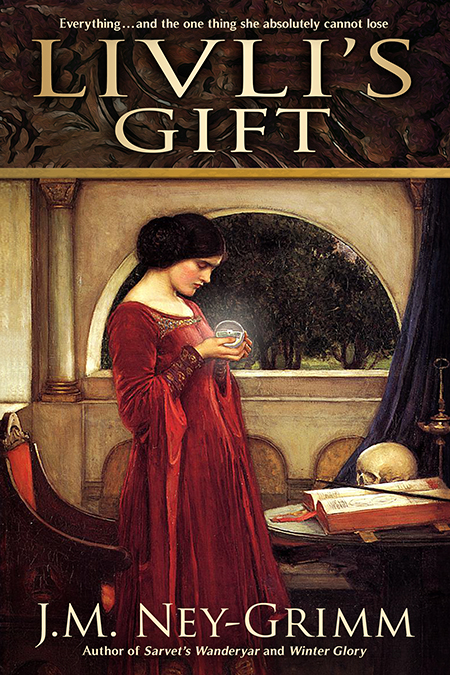 Livli struggles with a secret she keeps from everyone, even her closest friends, and she must solve the problem at its heart before she’s discovered.

She’s certain the answer lies in a fragment of folklore and magic half-remembered from her childhood. Almost certain.

She wouldn’t need forgotten magic if only the men and women of her secluded mountain culture dwelt together. But the women—and Livli—inhabit their sister-lodge atop its lofty bluff, while the men live apart in their brother-lodge several valleys away.

Unless she can force a change, Livli stands to lose everything . . . including the most precious thing in her life: her son.

A story of secrets, shibboleths, and deep-forged strength told with insight and engaging intimacy.

The ebook edition of Livli’s Gift possesses the new cover.
Amazon I B&N I Inktera I iTunes I Kobo I Scribd I Smashwords I 24Symbols
(The new trade paperback is coming soon.)

“I started reading and couldn’t put it down. I love the world and the characters she has created.” – Goodreads review

“I have never read a novel that made me feel so good. Mrs Ney-Grimm, you absolutely BLEW MY MIND! . . . It was so unique, so original . . . Usually I blast through the pages of a book that I love, but Livli’s Gift made me want to go as slow as possible, absorbing every moment of bliss.” – Goodreads review

Livli rerolled the scroll carefully, returned it to its pigeonhole, and sighed. The whisper of her breath sounded loud in the quiet space, as had the crackle of the brittle parchment and the faint click of the closing cabinet door.

The tale of The Princess and the Griffon did not have the reference she was looking for. Neither had The Lindworm’s Eyrie nor Triton’s Egg.

“Why am I bothering,” she murmured. “It’s a wild gos chase.”

But she knew why she was bothering. She really, really wanted the information in whatever tale it was.

“I wish I could remember.”

But she couldn’t remember.

Of course, she could ask her birth-mother. Sarvet would undoubtedly reel off an entire list of the folktales she’d told her children at bedtime. But I don’t want her to know . . . what I’m thinking about right now.

Livli sighed again and shifted uncomfortably. Having to pee so often was for the birds. I just got back from the dump-buckets! I’m not traipsing through all three of those long corridors again. At least not right away.

Instead she straightened and moved over to the windows.

The view was incredible. Not so much for its scope – a vista across a snowy valley brushed by clumps of dark pines, bounded by granite cliffs, and presided over by tall mountain peaks was ordinary in Hammarleeding enclaves – but for its wavy presence through glass while Livli stood indoors within warmth. The scroll-lodge of Siajotti was richly supported by all the sister-lodges and brother-lodges, and a library needed good lighting. So Siajotti had glass in its windows rather than hide coverings. And the scroll repository itself had big windows.

A coal fell in the tile stove that stood in the corner between the windows. The building creaked. The day was abnormally still, with no wind to mask the smaller sounds.

Livli paced from one end of the windowed wall to the other and back, her footfalls soft against age-darkened pine boards.

That lost scroll wasn’t her only problem. What am I going to do about Thoivra?

She traced one of the circular muntins holding the small glass panes – it was cool to her touch – and bit her lip. Focus, she reminded herself. One thing at a time. Scroll first.

I need to look somewhere else, but where?

None of the parchments on prayer, ritual, superstition, or even birth described the rite she sought. If it even existed.

2 thoughts on “A New Cover for Livli’s Gift”