I’ve been replacing all my covers featuring the back & white illustrations by Kay Nielsen.

I loved those old covers, but the odd thing is that I find I’m loving the new ones every bit as much. I suspect it’s because I’ve loved the works by John William Waterhouse for almost as long as I’ve loved Kay Nielsen’s illustrations.

I’m particularly delighted with the art I found for Troll-magic.

There’s a story behind that, which I’m gong to share. 😉

You may recall that when I searched the portfolio of John William Waterhouse for art that would fit Fate’s Door, I initially missed the painting titled Miranda, even though it is perfect, depicting a young blond woman in Grecian robes who could be Nerine, the sea nymph protagonist of my book. 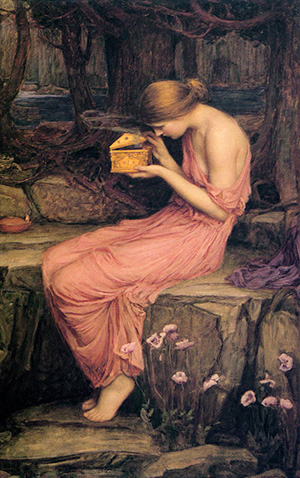 Luckily my friend Laura found what I had missed.

The same thing happened with Livli’s Gift, although I self-corrected there. After doing a mock-up based on Waterhouse’s The Annunciation, I noticed The Crystal Ball, which was (again) perfect.

Well, guess what? You know what comes next, right?

When I looked for art that would fit Troll-magic, I didn’t see anything.

It was only when I was searching on behalf of Livli’s Gift that I found myself doing a double take.

“Wait a minute!” I said to myself. “Psyche has blond hair like Lorelin. It’s too bad that the scene in which Psyche opens Aphrodite’s forbidden gift doesn’t fit anything in Troll-magic. I sat back, staring at the painting, feeling something niggle at my backbrain.

“What, what, what?” I wondered silently.

Then I had it! Waterhouse had painted more than one scene from the Psyche and Cupid myth. 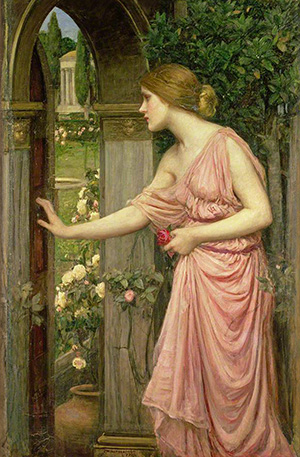 His work depicting Psyche opening the door into Cupid’s garden is perfect on so many levels.

The Psyche and Cupid myth (or, in a more Jungian vein, Psyche and Amor) is the root from which the fairy tale Beauty and the Beast grew.

East of the Sun and West of the Moon (the inspiration for my own Troll-magic) is the Nordic version of Beauty and the Beast. An illustration from the Psyche and Cupid myth felt heart-deep right.

On a more superficial level, it was right also. The motif of an unexpected side door, opening onto wonders, occurs several times in Troll-magic, starting with Lorelin discovering such a door in the gardens outside the palace of my Beast. 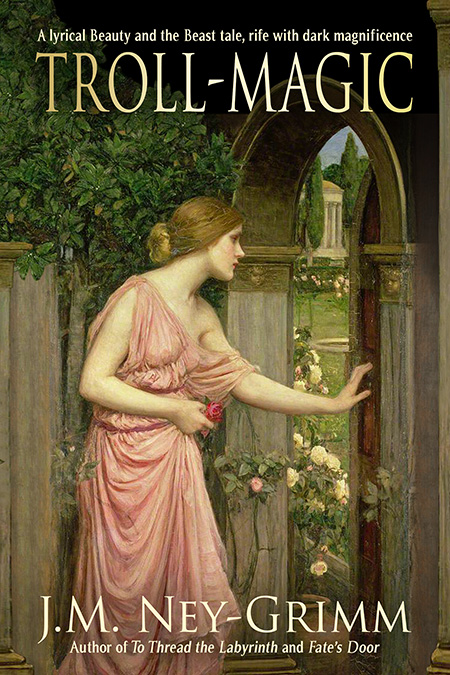 His curse turns on the choices of his childhood friend Elle. She once shared Kellor’s idyllic rambles through the wilderlands. She now loves all things musical. Might Kellor persuade her to neglect her own dreams to confront his lethal nightmare? Should he?

But no troll-witch permits her prey to escape with ease. The illusory loopholes in Mandine’s curse all twist back to its entombing heart.

Troll-magic tells a lyrical Beauty and the Beast tale, rife with moments of shining glory, dark magnificence, and unexpected significance. The fate of an empire, a people, and a world unfurls from Kellor’s deeds and Elle’s choices.

The new cover for Troll-magic has made it through the distribution chain to all of the online stores reached by these links.
Amazon I B&N I Inktera I iTunes I Kobo I OverDrive I Scribd I Smashwords I 24Symbols
(I ordered a proof copy of the trade paperback today! It will be ready soon.)

Surely there had been words when she cursed him. He could hear the scream of her rage and despair. He could see her contorted face, the splintering acidic light. But words? Even a verse? Something about a maiden who would freely chose?

That hardly made sense. He was alone here.

A maiden who would share his bed? How was that possible? And who would want to?

He wore some terrible shape. He had not yet worked out what it was. His eyes in that shape did not work the way he was used to as a man. And he couldn’t make out his reflection in the mirrors . . .

But worse than his fearful shape, he was half mad as a beast. His curse-twisted mind was incoherent, the thoughts spinning out of all sense. Rage would shake his entire monstrous being without any warning.

He was not fit to live with.

2 thoughts on “A New Cover for Troll-magic”