The fairy tale in which a curious lassie opens forbidden doors has always been one of my favorites. 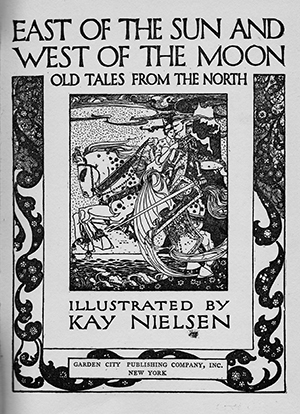 I remember wanting to write a novel inspired by it back in 1997 or 1998. I got so far as an outline, realized that my outline did not really match the story I wanted to tell, and then didn’t know how to proceed.

So I was delighted when the beginning for Caught in Amber burst into my imagination one evening in 2014, when I was trying to go to sleep for the night.

I got up out of my bed, grabbed my journal, and went into the living room to start scribbling. The scene came pouring out.

Even once I went back to bed, I didn’t get much sleep. I was too excited about my story to drift off into slumber. 😀

So, what was the fairy tale that started it all? It’s called “The Lassie and Her Godmother,” and it is one of fifteen Norse folk tales collected in East of the Sun and West of the Moon.

Because the book was published in 1914, its stories and illustrations are in the public domain, which means I am free to share them with you. I thought it would be fun give you the portion of the fairy tale that inspired Caught in Amber. So, read on!

The Lassie and Her Godmother

Once upon a time a poor couple lived far, far away in a great wood. The wife was brought to bed, and had a pretty girl, but they were so poor they did not know how to get the babe christened, for they had no money to pay the parson’s fees. So one day the father went out to see if he could find any one who was willing to stand for the child and pay the fees; but though he walked about the whole day from one house to another, and though all said they were willing enough to stand, no one thought himself bound to pay the fees. Now, when he was going home again, a lovely lady, dressed so fine, and she looked so thoroughly good and kind; she offered to get the babe christened, but after that, she said, she must keep it for her own. The husband answered, he must first ask his wife what she wished to do; but when he got home and told his story, the wife said, right out, “No!” 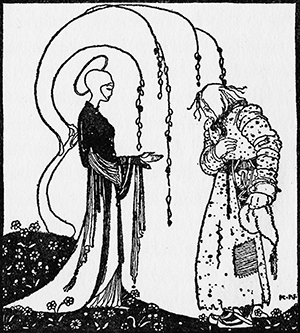 Next day, the man went out again, but no one would stand if they had to pay the fees; and though he begged and prayed, he could get no help. And again as he went home, towards evening the same lovely lady met him, who looked so sweet and good, and she made him the same offer. So he told his wife again how he had fared, and this time she said, if he couldn’t get any one to stand for his babe next day, they must just let the lady have her way, since she seemed so kind and good.

The third day, the man went about, but he couldn’t get any one to stand; and so when, towards evening, he met the kind lady again, he gave his word that she should have the babe if she would only get it christened at the font. So next morning she came to the place where the man lived, followed by two men to stand godfathers, took the babe and carried it to church, and there it was christened. After that she took it to her own house, and there the little girl lived with her for several years, and her Foster-mother was always kind and friendly to her.

Now, when the Lassie had grown big enough to know right and wrong, her Foster-mother got ready to go on a journey.

“You have my leave,” she said, “to go all over the house, except those rooms which I shew you;” and when she had said that, away she went.

But the Lassie could not forebear just to open one of the doors a little bit, when—Pop! out flew a Star.

When her Foster-mother came back, she was very vexed to find that the star had flown out, and she got very angry with her Foster-daughter, and threatened to send her away; but the child cried and begged so hard that she got leave to stay.

Now, after a while, the Foster-mother had to go on another journey; and, before she went, she forbade the Lassie to go into those two rooms into which she had never been. She promised to beware; but when she was left alone, she began to think and to wonder what there could be in the second room, and at last she could not help setting the door a little ajar, just to peep in, when—Pop! out flew the Moon.

When her Foster-mother came home and found the moon let out, she was very downcast, and said to the Lassie she must go away, she could not stay with her any longer. But the Lassie wept so bitterly, and prayed so heartily for forgiveness, that this time, too, she got leave to stay. 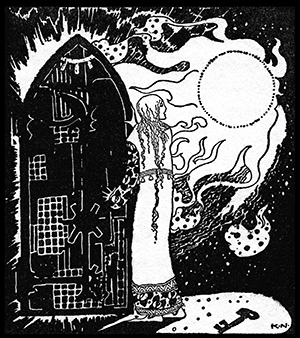 Some time after, the Foster-mother had to go away again, and she charged the Lassie, who was by this time half grown up, most earnestly that she mustn’t try to go into, or peep into, the third room. But when her Foster-mother had been gone some time, and the Lassie was weary of walking about alone, all at once she thought, “Dear me, what fun it would be just to peep a little into that third room.” Then she thought she mustn’t do it for her Foster-mother’s sake; but when the bad thought came a second time she could hold out no longer; come what might, she must and would look into the room; so she just opened the door a tiny bit, when—POP! out flew the Sun.

But when her Foster-mother came back and saw that the sun had flown away, she was cut to the heart, and said, “Now, there was no help for it, the Lassie must and should go away; she couldn’t hear of her staying any longer.” Now the Lassie cried her eyes out, and begged and prayed so prettily; but it was all no good.

“Nay! but I must punish you!” said her Foster-mother…”and away from me you must go.”

The fairy tale then goes in an entirely different direction from Caught in Amber.

Caught in Amber explores the bond between the lassie and her godmother, whereas the fairy tale follows the lassie as she reaches full maturity and learns that her choices have real consequences.

I must say that as I typed, “and away from me you must go,” I found myself bursting with commentary. I could barely bring myself to remark that my story and the fairy tale diverge radically from that point. I wanted to rush into impassioned speech without pause.

How could these parents, no matter how poor, give away their child? In our modern day and age, pastors don’t charge a fee for baptism. And, furthermore, if no pastor is available anyone can baptize a child (or an adult) in an emergency.

But, of course, the lassie’s christening is meant to symbolize something so precious and essential that no child should have to do without it. Perhaps something so urgently important that no child could thrive without it. What then might a parent do? What if your beloved child required an expensive medical procedure in order to be able to breath? What if you didn’t have either the money or the insurance for it? Then, indeed, you might do what this couple did.

But if the adoptive mother was so good and kind, how could she banish the lassie from her presence? Wouldn’t she have done better to impose a consequence the first time the lassie disobeyed, rather than just scolding and threatening?

But there are my modern sensibilities rising up again.

Modern child rearing techniques were entirely absent two hundred and three hundred (or more) years ago when this fairy tale evolved. Punishments were severe. Criminals had a hand cut off, were stoned or hanged. Children were deprived of food, were given solitary confinement for days, or were beaten. The concept that much smaller consequences can be very effective in teaching a child was entirely unthought of.

If the lassie had been my daughter, I might have required that she thoroughly clean the chamber from which the star had flown. And I would have blamed myself for assessing her maturity level so incorrectly when I left her alone at home. I certainly would not have made the same mistake a second time!

Consider, however, what the lassie did! The sun, the moon, and the stars…more symbols for things infinitely precious. It is understandable that her mother was upset! But mom needed to manage a bit better.

But let’s say mom had managed better, and still the lassie had been recalcitrant. It does happen that way sometimes. What then? Should mom have sent daughter away?

The thing that occurs to me is that in medieval times, children often were sent elsewhere at roughly age thirteen. Nobly born boys went to another castle to serve as a page there, and then to become squire to one of the knights. Nobly born girls went to serve as maid-in-waiting to the lady of the castle.

Children born to artisans went to be apprenticed to another artisan. Or went to live with an aunt and uncle to help out in the house and on the farm.

There was a recognized societal mechanism whereby someone other than mom and dad handled the child during those challenging teen years. The child received some of the independence they were craving, but still had the safety net of adult supervision.

Perhaps the lassie really did need to get away from mom in order to grow and thrive.

But the old fairy tales are certainly blunt! They don’t soften the darker aspects of human nature. 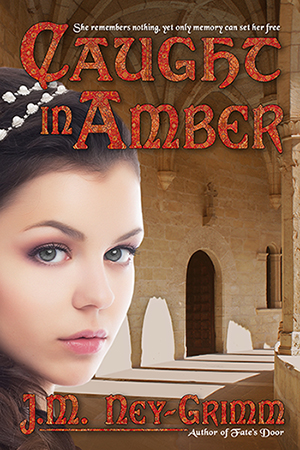 As for my own story…well, it was inspired by the fairy tale, but at heart it is very different, because I am exploring love and hope and courage far more than anger or vengeance. And, honestly, I remain to this day as fascinated by those forbidden doors as ever the lassie was. Really, how could she refuse to explore them when confronted by their closed panels day after day!

At least, that’s my view on the matter. 😀 What do you think?

For more about Caught in Amber, see:
Amber’s Suns
A Castle That Might be Amber
Character Interview: Fae