I must apologize for the lack of a new post here last week. I was sick. So sick, that even posting to say I was sick seemed beyond me. I’m on the mend now, but still not well enough to write the post I had in mind. Maybe next week! In the meantime, here’s a story opening, one of the bunch I listed under the popcorn kittens post. 😀 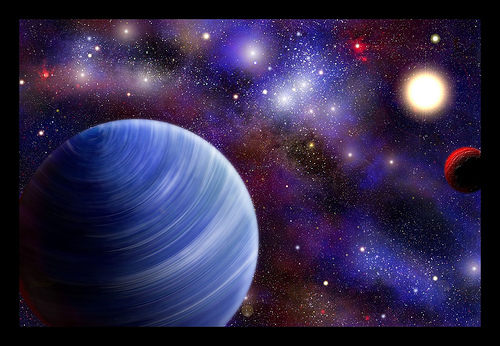 Mary cursed. Then cursed because she cursed. Cursing was symptomatic of the whole problem. She shouldn’t be able to do it, but Farmer Braun had replaced two corroded cybernetic chips in her temporal lobe last week with cheap black market knock-offs. New shades of meaning, along with new vocabulary, were the result.

She decided against a third round of blue – this was too serious for venting – and engaged the spooler again, heard its anti-grav whirr uselessly, followed by an ominous ka-chunk. Damn! That spooler needed to go out. The repulsion fence had to be deployed. The chickens must emerge to scratch.

Mary was only one of a thousand mobile avian robotic eyries – model MRY97 – in this meadow, the dirty system of Eridani78. But even one gap in the orbital shield would be too much. The Eridani primary generated plutonium and uranium nano particles in quantities immense enough to read as geysers of debris from far-off ancient Earth. A leak through Mary’s field . . . would poison an entire continent on the planet spinning lazily below. Her chickens must scratch.

She engaged the photoreceptor inside the housing that formed her body. The chickens – TCHQN49’s – clamped onto their roosting bars, indicators all go: internal checks performed, cleansing cycle complete, repair cycle complete. Mary permitted herself some sarcasm on that repair. No thanks to Braun. Why couldn’t the astro-shepherd keep the supply bays in Mary’s dorsal spokes stocked?

She threaded her photoreceptor through to the spooler’s hutch. And cursed again, unnoticing of herself this time. Black carbon soot mottled the spooler’s ceramic carapace, concentrated around the ejection module. Mary unfurled her molecular probe to analyze the vacuum. Yep. Bitter scent of burnt copper. Sweet taste of almonds. Damn, damn, damn! She’d noticed the older repulsor beads growing ragged and scratched. One of them – she launched her internal palp – was fouling the ejector mechanism. The carbon scorching felt gritty under her palp, the jammed bead, sharp where its hull was delaminating.

Damn! This was the rat that ate the cheese that lay in the house that Jack built. Except her rats, the TCHQN’s, wouldn’t eat. And her cheeses – the plutonium nanos – were deadly.

2 thoughts on “Fox in the Hen Coop”