My co-editor, D.J. Gelner, contributes a twist on classic pulp SF to Quantum Zoo. Here is the opening to his story:

I called them stingers.

They had a different word for them, to be sure, but it was a word that I had no hope of pronouncing. It was to be expected given that, best I could tell, the squeals and whines that passed for “language” around these parts were little more than confirmation of whatever asinine thoughts these things sent each other telepathically.

Unfortunately, the octopi (that’s what I called the awful purple creatures) and I weren’t “on the same wavelength,” so I had no idea whether the long tentacles tipped with sinister barbs had any other purpose than to scare the ever-living shit out of me. 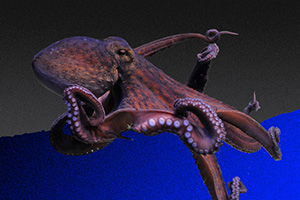 Most of the adults seemed to enjoy just that; they’d shoot a gangly limb through the force field, right at my forehead, and stop less than an inch before they sucked out my brains or (maybe more mercifully) put me out of my misery already.

The kids weren’t quite as kind, though for some reason they targeted the fleshy part of my butt and laughed gleefully as the stinger entered, released some kind of fluid into the wound, and retracted.

For a good day or two after that, my ass felt like it had been gouged by the worst kind of hornet you could imagine.

It had been exactly eighty-six days since my life had emptied. That was the way I thought of it, you see; a life utterly drained of meaning, devoid of purpose.

At least, I thought it had been eighty-six days. When they weren’t jamming needles or teeth or whatever the stingers were into my ass, some of them tried to keep things as “normal” as possible for me. 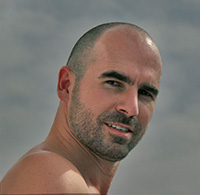 The result was a small room, maybe twenty feet by twenty feet, segregated into four climates: desert, jungle, arctic, and a tiny shorefront of beach, which is, unsurprisingly, where I spent most of my time. The lights brightened and dimmed to approximate my day and night, and though it sure seemed like twelve hours of light and twelve hours of darkness, time dragged like an anvil to the extent that it could have well been six or three hours of “daylight,” and an equivalent amount of night.

I counted each cycle since, against my wife’s better judgment, and somewhat ironically because of several recent muggings in our area, I decided to go for a late-night run through the neighborhood, all the better to wrestle with all of the now-unimportant thoughts that raced through my head: “What if Jennings hates my presentation tomorrow?” “If I get fired, how will I pay for Sarah’s braces?” “How will I face my family, my friends, hell, the neighbors?”

It’s not like we lived in some secluded wooded area, either; we were firmly planted in the suburbs, surrounded by streetlights, sidewalks, and those very nosy neighbors with whom I was preoccupied as some classic rock song or another (maybe Zeppelin, probably some of their earlier stuff) blared through my headphones.

I stepped awkwardly off of a curb and must’ve yelled a dozen different curses into the sky. I wonder if my cries were enough to entice the busy-body Kipsmillers or Chandrasekhars to open a curtain or widen the blinds enough to witness what happened next. 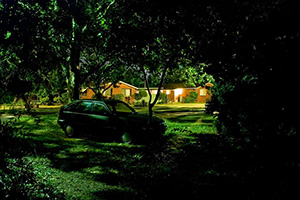 As I took a seat on the curb, the prematurely dew-soaked grass seeping through my gym shorts and into my boxers all the while, I looked upward to find what first appeared to be a star, then a planet racing toward me. What was once one solid, bright light soon separated into three, then six, then over a dozen distinct orbs within seconds, so fast that my mind couldn’t begin to comprehend the series of events.

Before I could even mouth another curse of astonishment, the only way I can describe it is that I felt “warmth” in my head. Not necessarily that my brain was boiling, or anything like that, but almost like it was vibrating incredibly quickly, and being goaded to race.

As the sensation leaked down to the back of my head and neck, the rest of my muscles tensed. A sharp whine rattled my brain. The distinct scent of warm biscuits followed.

Then I blacked out.

To read more of “Echoes of Earth,” pick up a copy of Quantum Zoo.
Amazon.com I Amazon UK I Amazon DE I Amazon ES