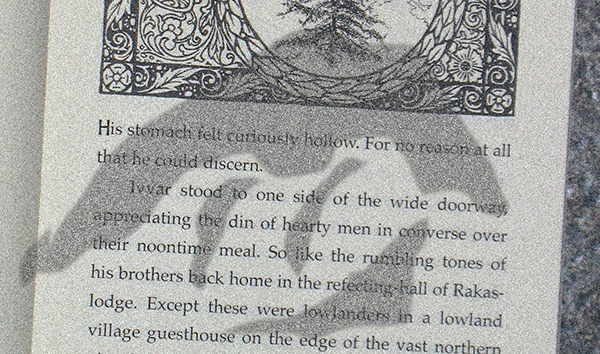 More than a month ago, I blogged about my torn retina and its repair. In that blog post, I promised to report back when I had more news on the success the repair. Did it work? Did my retina rip again? Would I get to keep the vision in my left eye?

I saw my ophthalmologist two weeks ago, and he was really pleased. He said the cryo repair was one of the best looking he’d ever seen. He also said that the gas bubble (injected to stabilize the repair) was nearly gone, dissipating as expected. Which meant that I could sleep on either my left side or my right side. But not on my back.

If I slept on my back, the bubble would float up to bump my eye’s lens and damage it.

This was all fantastic news. The repair had “taken.” I’m still at an increased risk for another retinal tear, because once you’ve had one, having another is more likely. But it’s unlikely that the cryopexy itself would cause a tear. At this point, the eye simply needs to finish healing (which will take another couple of months), and all is well.

Being able to turn over was also fantastic news. It turns out that my body does not do well when it has to stay in one position all night long. I would wake up after about five hours of sleep with my left hip in agony. I simply had to change position.

Since I couldn’t turn over, I had to get up. Two months of only five hours of sleep each night meant I was very, very tired. And cranky. And grumpy. I couldn’t take naps because my hip joint needed a full day to recover, so that it wouldn’t still be hurting when it was time to go to sleep again. Being able to turn over helped. A lot. But not quite as much as I’d hoped.

Turns out I generally do a lot more sleeping on my back than I’d realized. Sleeping only on my left or right sides meant that my hip didn’t hurt as much and that I woke after six hours of sleep instead of five.

But about a week ago, the bubble in my eye, which had appeared as a round purple circle at the bottom of my vision, and which had been getting steadily smaller and smaller, disappeared altogether. It was gone! Which meant I could sleep however I wished.

That first night of sleeping freely was glorious! Glorious, I tell you! 😀

However, there remains one plaguing difficulty. All the spots of blood in my eye from the cryopexy have turned into floaters. The floaters from the original retinal tear no longer remained after the cryopexy. And the blood specks, while clearly visible, were tiny with lots of clear vision between them.

The current crop of floaters covers almost all of my central vision and is fairly dense. I can see through it. I have no problem walking around my house now. (I had been bumping into doorways when my left eye was too painful to open.) But I don’t think it would be a good idea to get behind the wheel of a car. And detail work is very challenging.

As you might guess from the photo at the beginning of this post, reading is a strain. I can and have been reading, but I have to blink a lot and squint.

I’ve also been working in Photoshop to create floor plans for the tower citadel in my work-in-progress, Tally the Betrayals. And, phew! Seeing the ruler markings at the edges of the Photoshop file is really hard.

So my eye is healing well, but all is not yet heavenly at Casa Ney-Grimm. I am supremely grateful that I can see, but January and February have been hard. And, so far, March is not great either. I trust I shall make it through this siege, but any prayers or healing vibes or good wishes you can spare for me would be much appreciated!

6 thoughts on “How Is My Torn Retina Doing?”