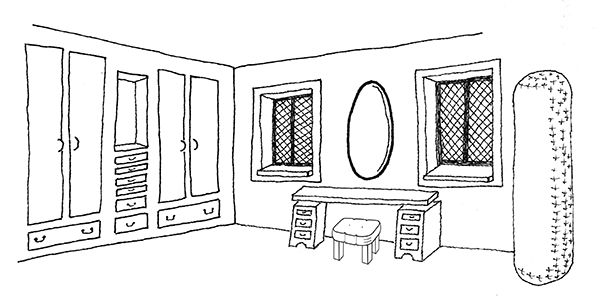 When Nerine first enters her room in the 6th scene of Fate’s Door, she is desperate to find some oddment that she can add to the tapestry of destiny that will save her friend Altairos.

The well at the roots of the World Tree has just shown Altairos drowning at sea. And Nerine knows that if she can just find the right forbidden something, she can save him. Maybe.

She tries to calm herself – anxiety rarely helps one think clearly. The warmth emanating from the tile stove in the right corner on the outer wall helps, but not enough. Her errand is too fraught, too weighted with life and death.

So she’s looking at her room with far more attention than she’s given it in the last 5 years, and we look with her.

There are the built-in wardrobes on the left, with a stack of drawers and a niche between them. Could that vital something be behind those wardrobe doors or in one of the drawers? 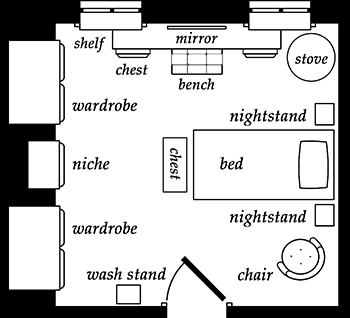 Across from the room’s door, there’s the shelf and mirror, and the two chests of drawers tucked beneath the shelf. There must be many trinkets stored in them. Maybe the saving item is amongst them.

The bed on the right with its nightstands seems less likely, as does the cushioned armchair near it. Surely the the linens in the blanket chest at the foot of the bed are too large to be incorporated into the tapestry of fate.

But Nerine considers everything. She does not have much time, and only the right thing will save her dear friend.

For more about Nerine’s world, see:
Brocade and Drawlooms
Cottage of the Norns
The Norns of Fate’s Door
The Baltic Sea
The Ancient Goths
Lugh and the Lunasad
Crossing the Danube
The Keltoi of Európi
Vertical Looms