Last week, I emailed my newsletter subscribers a note about the Hantidan dragon-gods. Since I was about to announce the release of Sovereign Night, I thought a bit of intriguing trivia might be something fun for my subscribers’ in-boxes.

The thing is…you, my blog readers, might enjoy it also. So here it is for your perusal.

(To those of you who are both blog readers and newsletter subscribers, my apologies for the duplication.) 😉

The Hantidan gods are more truly shapeshifters than dragons. They can take any living shape—man, woman, child, or beast. But in Hantidan belief, the native essence of dragon is shapeshifter. Hantidans describe the dragon form as one in which the god assumes the physical nature of nine beasts all at once.

The dragon’s head resembles that of a stallion, the eyes those of a hawk, the ears a cow’s, the antlers a stag’s, the neck a snake’s, the belly that of a tortoise, the scales those of a carp, the claws an eagle’s, and the soles those of a tiger.

The Hantidan pantheon consists of nineteen dragon-gods, seven of them “greater” and twelve of them “subtle.” Each one possesses a characteristic color when in dragon form, and preferred forms when walking as a human or prowling as a beast.

For example, Enyakatho—the god of intelligence and the spirit of inquiry—bears green scales in dragon form, but might stalk the jungle as a lynx or visit an outlying village as a skinny and wizened old man.

Gael and Keir first attempt to scope out the Glorious Citadel by attending an offering ceremony held for Enyakatho in the public Court of Earthly Order.

Enyakatho is considered the patron god of Hantida’s royal family, as well as of scribes, poets, and philosophers.

Here’s a list of the “greater” dragons and their attributes:

The Hantidan dragon-gods play no active role in Sovereign Night, but rather form a pervasive part of the physical and cultural landscape. 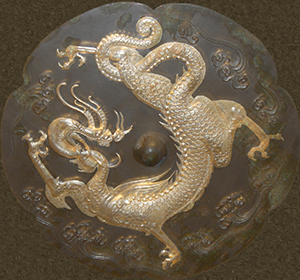 The ruler of the city is called the “Dragon Blessed.” And much of the art—paintings, sculptures, vases, scrolls, and architectural ornament—depicts dragons.

When one such artwork is damaged during events in Sovereign Night, the nobles of the royal court speculate that whoever did the deed should have targeted the bronze Imfanelo—patron of peasants—rather than the gold Orunal—patron of the Dragon Blessed himself.