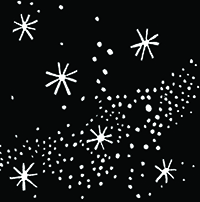 Mandine de la Royaume has pulled off an almost impossible feat: suppressing the utterance of part of a curse. Curses require the channeling of a substantial torrent of power, more than the safe magic of the North-lands — patterning — permits. A curse is incantatio, and its casting causes the curser to become a troll.

Mandine had been a troll for decades before her troll-disease stole her sanity, and her skill as an incantatrice has only grown. Her curse is potent, but even potent curses have loopholes. Hers is no exception. Nornally these loopholes must be specified in the doggerel poetry that comprises the waste (in addition to searing orange light) accompanying incantatio. The latter half of Mandine’s curse was swallowed by her will and her strength. Her cursee, Prince Kellor, must seek his freedom by guess, since he has heard no more than a snippet of the conditions for his release.

If you have not read Troll-magic, read no further in this blog post! Spoilers follow. But do come back after you finish the novel. How Kellor seeks his solution is fully explored in his tale, but the suppressed verses themselves do not appear. Kellor’s courage and ingenuity are much more relevant to the story than the arcane magic that creates his challenge. Thus the appearance of the swallowed stanzas here in my blog: a treat for the loremasters and aficionados of appendices among us!

A bear no more, speak the last words that are thine.
Bid thy maiden farewell, she has cause to repine.
When an hour is done, search the sky for my sign:
My chariot arrives, thy will now is mine.

The maiden has failed, thy will’s bound to my need.
Can the curse be unraveled, the prisoners freed?
Seek the ways out of bondage, take heart and take heed:
My throat strangles freedom, swallows all in greed.
Yet a path lies open, awaits song and deed.

Excavate and reveal the corpse without breath,
Merely wood carved in likeness of chilly death.
Bring the children before their mother’s gagged wrath.
They call, “Mama!” She speaks and leaves the Lainkath.
Her escape heals her mate, pacing his split path.
Sundered soul and flesh rejoin in this aftermath.

East of sun shall maiden seek, and west of moon,
Cair Seila, lost palace, the site of my tomb.
To Cymbre she shall give three gifts, ask three boons:
Gold apple, awareness, heart of choice in life’s loom;
Gold carding comb, sorting — order prevents ruin;
Gold spindle for spinning, shaping her life’s doom.
For each gift: one visit, dawn to stroke of noon,
Chances to preserve thee from thy fate as groom.

Wedding pomp and splendor fling chapel doors wide:
The maid plays music, thee walks toward Cymbre’s side.
Tears drown the player’s cheeks, loss and sorrow’s tide.
She cedes all claim on thee, weeping beyond pride.
Hears thee speak thy vows to take Cymbre as bride,
To love the troll-daughter, as her husband to bide.

Cymbre speaks her vows: no words thee looked to hear,
No promise of love, no oath to hold thee dear.
Unforeseen reprieve! She breaks the bonds of fear,
Not spouse, not betrothed, mere brother free and clear.
Saved by her gift along with all thee name peer.
No prisoners remain: Mandine’s curse barren, sere!

For more about the world of Troll-magic, see:
Who’s Who in Troll-magic
Families in Troll-magic
Bazinthiad’s Fashions
Bazinthiad, A Quick Tour of the City
Magic in the North-lands
Magic in Silmaren
Radices and Arcs
Mandine’s Curse
Character Interview: Lorelin
The Accidental Herbalist
What Happened to Bazel?