Mira’s Corner is a nifty little blog chronicling the adventures of the inner journey and the many ways the inner world dovetails with the outer.

So why am I telling you about Mira’s Corner? (Beside the fact that it’s cool!)

Because Mira kindly hosted a guest post of mine last May, and I suspect many of my newest readers have never seen it. Now’s your chance, because I’m reproducing it here. 😀

Edited to add: I just tested the links to Mira’s blog and discovered that it is now a private site, not open to the public. She’s a neat lady who comments occasionally on The Passive Voice. Perhaps you can catch up with her there.

Mira let me know that memoir and humor are appropriate topics for her Corner. So I’m “speaking” as a raconteur, although my humor tends toward dry and understated, rather than laugh-out-loud. I bring with me a tale of big-city misadventure (sort of!) married to its alter ego, pastoral steampunk fantasy.

How, you may ask, do urban high jinx tango with bucolic shenanigans? Not an obvious mix!

I will tell you.

It becomes more comprehensible, if you understand that:

1) my tale touches both my real-world history as a would-have-been grad student and my fantasy novel, Troll-magic; and

2) it involves neither city streets nor woodland groves, but a bedroom in darkness and a stranger. 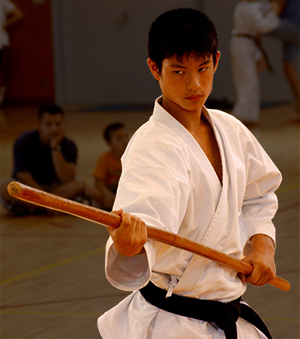 I was twenty-three, proudly sporting an architecture degree, and looking to make a career switch to psychology. I know—pretty strange; an unpleasant encounter with a nude pin-up poster in the all-male architecture firm where I worked one summer re-routed my destiny.

I applied to clinical psych programs (where the profs found my architecture education hard to swallow). Rutgers invited me to interview. I was thrilled. An interview at a tough program means you have a chance of being accepted.

I burbled the good news to all my acquaintance, including the master of the dojo where I studied martial arts.

He said: “Rutgers is just across the river from New York City! You have to visit Eamon!”

Eamon (name changed to protect the . . . almost innocent) was my teacher’s teacher. He’d traveled to Okinawa, Japan, the origin point for the martial art we practiced, in his dedication to become great. He headed up his own dojo in New York. Naturally, I must take a lesson from my master’s master.

“He’s got an apartment right there in the city,” declared my teacher. “He’ll be delighted to put you up!”

The arrangements were simple. My teacher phoned his teacher. I participated in a follow-on conversation to learn details for driving and parking (both challenging elements of the Big Apple). All was set.

When the day of my interview arrived, I left Virginia before dawn, arrived at Rutgers in plenty of time, and participated in a completely boring dialog with my interviewer. She asked only the predictable questions. Why are you leaving architecture for psychology? Are you crazy? (Well, no, she didn’t ask that, but you get the idea!) 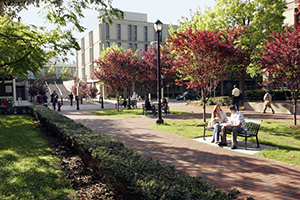 My more interesting conversation took place after an accidental encounter in the hall. I have neither memory nor idea of how I wound up talking with a psych professor who was not (alas) in the clinical program, but I’ll always remember what we talked about.

I’d been wondering how a person’s will to do something was translated at its most basic level from intention into action.

When I’m sipping tea (my beverage of choice) and I form the intention to bring the mug to my lips, what is it that bridges the gap between “I will do this” and actually doing it? I suspect that’s an unanswerable mystery, the same sort of question as “what is the meaning of life?” or “what came before the Big Bang?”

But it turned out this professor had been wondering the same thing! We had a great discussion. And I like to think he put in a good word for me when the admissions committee reviewed all the applicants for the final cut. (No, I never did make it to graduate school, but that’s another story!)

So what does all this have to do with the city and dark bedrooms? Well, it doesn’t. Mere prelude. 😀 Now I’ll get on to the meat of my tale.

I drove into New York utilizing the precepts culled from my big city acquaintance: floor the accelerator as soon as the light turns green and whenever there’s clear space in the lane ahead. It worked well for me as a new adult.

I survived and arrived.

There must have been dinner in there somewhere, but my memory skips to the class in Eamon’s dojo.

Honestly, it was just like class in my own teacher’s dojo: same routines, same exercises, same types of feedback. Intriguing to meet different personalities in the students and the teacher, sure, but hardly worth heading into NYC rather than home.

He ushered me into his apartment, showed me the guest room that would be mine, bade me goodnight, and departed to the rest of his evening. Okay.

I showered, grabbed PJ’s, read a little to unwind, turned out the light, and went to sleep. We’re finally getting to that dark bedroom!

I roused some time later to feel the far side of the bed dipping as someone climbed in.

I froze, even as my heart started to hammer.

I suppose he wasn’t a complete stranger. I knew it was Eamon, who I’d first met that day. But what on earth was I supposed to do? He was a fifty-gazillion black belt, and I was utterly alone in a big city where I knew no one.

I froze, and I stayed frozen. Waiting to see what would happen next.

Eamon settled in on his side of the bed, never getting anywhere near me. (The bed was immense, bigger than a king.) He never spoke. I didn’t either. I don’t know how long I lay there in fear, waiting, waiting . . . but eventually I fell asleep.

In the morning, Eamon was gone—gone from the bedroom, gone from the apartment. I dressed, quickly packed, summoned my car from the garage, and drove all the way back to Virginia.

I don’t know why Eamon didn’t explain that his apartment possessed only one bedroom. (He didn’t give me a tour, and the layout wasn’t obvious, so I hadn’t guessed it on my own.) Why didn’t he offer me the living room couch? Or take it himself, if he felt inclined toward graciousness?

I never told anyone what had happened. I’d taken no harm. That was enough.

But when I wrote Troll-magic and arrived at the moment where Lorelin awakens in darkness, in the bedroom of an enchanted underground palace, to feel some stranger climbing in on the opposite side of the bed . . . well!

The the scene almost wrote itself. I’d lived it, after all!

Have you ever experienced what should have been danger, but (miraculously) wasn’t? Did you wish you’d handled it differently? Or were you satisfied with your choices? I remain befuddled by my own pseudo-escape. To this day, thirty years later, I’m not quite sure what to make of my NYC adventure. But I loved putting the scene into my story!

Troll-magic is available as an ebook.
Amazon I B&N I iTunes I Kobo I OverDrive I Smashwords

Or available as a trade paperback from:
Amazon I B&N I Book Depository I Fishpond
Mysterious Galaxy Books I Powell’s Books

For more about Troll-magic, see:
Bazinthiad’s Fashions
Magic in the North-lands
Radices and Arcs
Character Interview: Lorelin
What Happened to Bazel?