I used tri-tip steaks the last time I cooked this, but really many cuts of meat would work.

I don’t usually add salt to a dish before I cook it, figuring that it’s best left up to the individual diner. Eating pan-fried porkchops at a friend’s house changed my mind. She sprinkled salt and pepper onto both sides of the chops before placing them in the pan. And they were delicious! Much better than if I had sprinkled my portion after it was cooked and served. I decided to try her method on another meat dish: steak. 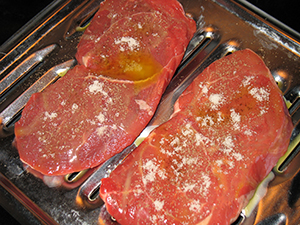 Grease the broiler pan with a thin layer of olive oil.

Melt the butter, from 1/4 cup to 1/2 cup, depending on how much steak you are cooking.

Place the steaks on the broiler pan. Pour the melted butter over the steaks, gently and with some precision. Allow the butter to form a thin skimming over the entire surface of the meat. Don’t waste the butter by allowing it to spread on the pan. Keep it on the meat.

Sprinkle salt lightly over the surface of the meat – not too much!

Grind black pepper over the surface of the meat. Again, not too much.

Place the broiler pan under the broiler. I use the second rack position, not the first (the highest).

Broil for 6 minutes, and remove the pan to a heat-resistant surface. Flip the steaks. Pour the rest of the melted butter over this side of the meat. Sprinkle salt and grind black pepper onto them. 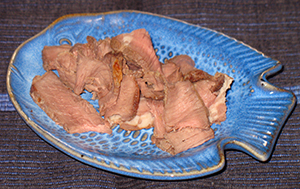 Broil this side of the steaks for 6 minutes.

Remove the broiler pan from the oven and let the meat rest for 5 minutes. Slice it thinly and serve. Yum!