The e-book editions of Hunting Wild and Serpent’s Foe are now both available for purchase at Apple and B&N, as well as several other e-tailers. Check them out! 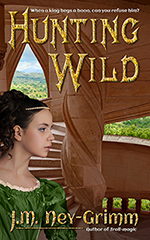 Young Remeya worships the forbidden horned god. A worship made taboo half a millennium ago. Performed still in secret by a few. Quietly tolerated by the king. Epic fantasy in which old beliefs and old loyalties clash with hidden magic in the Middle Ages of J.M. Ney-Grimm’s god-touched North-lands. 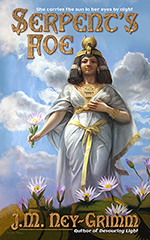 Once she stalked the duat by Ra’s side, carrying his light in her eyes and battling the monsters that assailed them. Now, tormented by confusion and her own fury, she longs to regain the unique powers which – inexplicably – elude her in captivity. In this mythic tale of pride and revelation, a fight beyond death delivers one last chance at redemption.

I’m excited that these stories are now more widely distributed. I’d meant to make them so much sooner. I had the end of January 2016 in mind! There’s a tale behind why I didn’t come close to that date. Naturally…I’m going to share it with you. 😀

Going back to the beginning…

In November 2015, I released 5 titles all on the same day: Hunting Wild, Serpent’s Foe, Winter Glory, Fate’s Door, and Caught in Amber. I’d decided to try several marketing strategies, all at once.

• The Liliana Nirvana Technique: releasing 5 titles within a very short span of time
• Promotional Release Price: 99 cents per title
• Promotional Advertising: multiple ads – with eBookSoda, BKnights, and GenrePulse – capped off by a run of Amazon free days
• Amazon Select: releasing the titles into the Select program, so as to make them available for Amazon’s subscription program, Kindle Unlimited

In the sort term, looked at within narrow parameters, these strategies worked well. I sold nearly five times as many books in the last two months of 2015 as I normally would have.

In the long term, from a business person’s point of view, the strategies were a failure.

Sure, I sold more books, but because they were priced at 99 cents, the advertising cost more than the money brought in by the sales. I lost money.

Even worse, once the advertising blitz was over and the prices returned to normal, there was no significant change in the rate at which I sold books.

For most of 2015, up through October, I’d sold roughly 15 books per month. By April 2016, I was selling 18 books per month, and I knew where the extra sales were coming from: not my big promotional push.

Losing money in the short term in order to have more readers discover my work over the next year might have been a good move. But losing money to maintain the the same rate of sales? Not so much.

Now, I continue to be delighted with the fact that new-to-me readers continue to discover my books. Marie Force recently wrote about the importance of one’s readers, as did Kris Rusch. Dean Wesley Smith has always said: (paraphrased) remember that there’s a real person behind every sale, a reader who has decided to spend several hours enjoying your story. That means something. That’s real.

I do remember that, every single time someone buys a book of mine, and it’s a wonderful feeling.

I’d intended to keep the stories in Select for only 90 days, or 6 months at most, but two things derailed my plans.

The first was the rip in my left retina that occurred in January 2016. The cryopexy repair was incredibly painful, as was its immediate aftermath. I was barely capable of anything. I couldn’t even sleep much. I certainly couldn’t tackle publishing tasks.

Once the pain subsided, I had to hold my head at an awkward angle, 24/7, for months. I still wasn’t doing much!

When the ordeal was over, I dove into writing. It had been a long time since I’d written fiction, and I was missing it dreadfully.

I also pulled Serpent’s Foe out of Amazon Select, making it available on Kobo and Smashwords. I set up an account with Draft2Digital, another distributor like Smashwords that could reach two new e-tailers that I’d heard good things about: 24Symbols and Tolino.

Draft2Digital proved to be my second sticking point.

Many indies speak positively about Draft2Digital. Indeed, I hope to join their number. They like the customer service. They like the modern and up-to-date website and author dashboard. They like the monthly payment schedule. They like the ease with which one can upload files. A few even speak of an increase in sales that occurred when they started using D2D.

I’d wanted to try D2D myself for nearly a year. I figured it would be good to “test the tires” with a short story, and uploaded Serpent’s Foe, planning to distribute the story to Apple and B&N through D2D.

The hitch I encountered was how D2D creates e-book files from uploaded Word files. They want each book uploaded as three separate files: front matter, the story, and back matter. When I uploaded all three of those parts as one file, the resulting e-book was not structured and formatted properly.

I realized, of course, that dividing Serpent’s Foe into three files would be a relatively simple matter. That would have solved the structural problems with the e-book. But the only way to solve the TOC problem would be to build the e-book file myself, using one of the software programs designed for that: Scrivener, Vellum, or Jutoh.

I had already looked into all three of these programs, and I knew I wanted to learn how to use Jutoh. But I also knew that if I were to purchase Jutoh on the spot and dive into learning how to use it, my writing on The Tally Master would come to a complete halt.

I’d already spent many months not writing, first due to all the publishing tasks required to release 5 titles simultaneously, and then because of my torn retina. It would have broken my heart to stop again. Plus, without the writing, I have nothing to publish. My writing has to come first.

So I wrote, loving my characters, loving my story, and loving being immersed in the creative process again at long last.

Just last week I’d finished all my work on the appendices for The Tally Master, but my second reader was not yet ready with her detailed story feedback. I cannot do my final round of revisions until I hear from her. I had a gap in my workflow!

I filled that gap with learning Jutoh.

I must say that I’m delighted with the program. It took me a full day to really understand all the controls and how to use them; another full day to create the e-book files for Serpent’s Foe (mobi for Amazon and ePub for everyone else).

Now Serpent’s Foe is structured exactly as I want it to be, including the table of contents. It uploaded smoothly to Draft2Digital and maintained its formatting. It’s available at 5 of the 6 e-tailers to which I have D2D distributing. I’m sure it will soon go live at the sixth, 24Symbols. (ETA: It’s live now.)

Since my second reader was still reading and making notes, I dove into putting Hunting Wild through Jutoh. I wanted to cement my mastery. Hunting Wild is longer than Serpent’s Foe, and thus took longer to format, but it too came out beautifully. And it too is now available at 5 of the 6 D2D e-tailers.

I’m on my way to broader distribution with all of my books! I like it!

Take a moment and consider the horrible possibility that a Nook devotée couldn’t get Hunting Wild at B&N, or an iPad aficionado couldn’t get Serpent’s Foe from iTunes. Now they can! And soon Winter Glory, Fate’s Door, and Caught in Amber will be available there as well.

I’ve never liked the idea of being entirely dependent on one e-tailer, but that is exactly what Amazon’s Select program requires: any book available on Kindle Unlimited cannot be offered by any e-tailer save Amazon. For that reason, I’ve only dabbled in Select in the past, trying it for 90 days to see if it might boost my discoverability. When no such boost arrived, I pulled the book with which I was testing the waters.

One might argue that only a longer trial would open Select’s benefits. Well, now I’ve made that trial, and it doesn’t. Not for me, at least.

In the future, I plan to use Select for short intervals – just 90 days – because I have some readers with very tight book budgets, who won’t be able to read my books unless they appear at least once in Kindle Unlimited. But after a new release spends its brief time in Select, I’ll send it wide, so that my readers who patronize Apple, B&N, Kobo, and other stores can snag their copy.