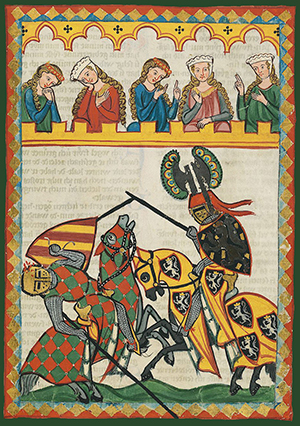 Tahaern, the protagonist of Blood Silver, is skilled in combat, both on foot and ahorse.

A number of the battles in my novella transpire on foot, because the terrain is so pocked with holes and knotty tree roots that a horse would fair poorly. In one battle, Tahaern is unhorsed!

I researched long sword fencing (which I found fascinating), but I also needed to know how a knight fought when on horseback.

The first video I found was a great deal of fun. It features Sir Henry Sewell, and wow, does he have an attitude! The re-enactor must have an amusing time roleplaying the pride and arrogance of his character.

I’m not sure how much I learned about the niceties of wielding a lance while charging one’s enemies, but I did gain a better understanding of just how important were the spirit and skill of one’s mount. The horses were indeed beautiful, and the jousting was spectacular.

For those reasons alone I’m gong to share the video from English Heritage with you.

So, did his “theater of the joust” take your breath away? I must confess I watched the video several times over just for the enjoyment of it. 😉

Then I went seeking more information about how one actually fights on horseback. And I found a much more specific video by Schola Gladiatoria. It, too, is entertaining (combining the gruesome with the scholarly), but gave me a lot more of what I needed to know.

Matt Easton demonstrates the techniques with a cavalry sword, but also explains exactly how they apply to lances and why.

Did his description of “the extraction” give you a gruesome shiver? It did to me!

But the information was precisely what I needed in order to understand how Tahaern and his fellow knights would have managed on horseback in battle. 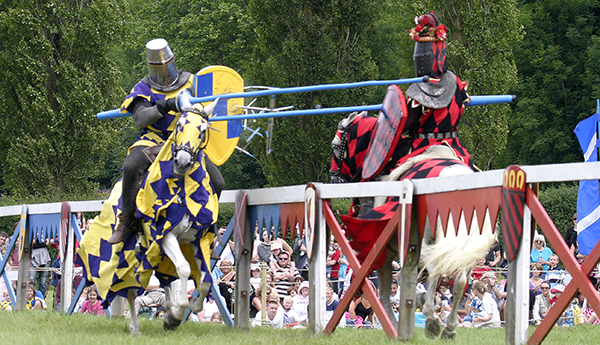 For more about Blood Silver, see:
Plate Armor, How It Works
Cross Strike, Squinting Strike, and Scalp Strike
The Book Title
The Crooked Strike
Which Cover to Choose?
The Strike of Wrath
Rope Climbing and a Cliff
What If the Sword is Wrong?
A Song of Peace
Wielding a Long Sword
Origin of the Story (The State of This Writer)