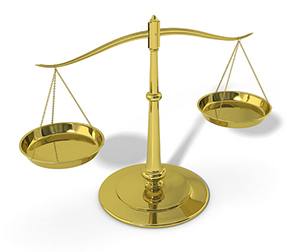 Perilous Chance will soon release in paperback! I’m excited about it and have all-things-perilous-and-chancy on my mind, so I’m going to share a series of blog posts relating to my story. The first is this one about the justice system used in Auberon, where Perilous Chance takes place.

For those of you who haven’t read Perilous Chance, Clary – an 11-year-old girl – is its protagonist, and she encounters the legal system in the course of her adventure.

Clary’s uncle, Arteme ni Calcinides, serves as Justicar of the Peace for his lething. (A lething is a subdivision of a worthing. A worthing is similar to a county. Auberon possesses eighteen worthing.)

Being Justicar means Arteme presides over his Court Justicarate when issues such as petty theft, disorderly conduct, or trespass arise. And dispenses summary justice, without formality, for smaller offenses: wearing inappropriate bathing costume, grazing your cow on your neighbor’s land, moving a road sign, and the like.

Arteme passes no judgment on more serious crimes. Burglary, arson, and assault and battery all get referred to the next higher court, the Quintary Sessions, held five times a year and presided over by three Lord Justicars.

Murder and kidnapping must be tried at the Courts of Assidere, convened as necessary.

And treason goes all the way to the Morofane’s Bench.

The structure of Auberon’s judicial courts looks like this:

Thus, when Clary and her family arrive at Arteme’s manor house, reporting their witnessing of a violent death, the Rofane must go investigate.

If the events prove to be death by misadventure, the case need go no further. But if murder is suspected, Arteme must refer the case to the Quintary Sessions along with a suspect and all the evidence pointing to that suspect. The Rofane has quite a job cut out for him!

Luckily, he has help.

In the distant past, his help would have consisted of the knights under his rule and their squires. But in these “modern” times, the Royal Judiciary appoints and funds a secretary – to handle records – as well as twenty stave-men – to make arrests – and five warders – to supervise the stave-men and handle especially challenging criminal situations.

However, these twenty-five men on active duty must secure the entire lething. As Arteme departs to investigate the scene of the death, he has only four of them at hand.