Last Friday, I talked about back pain and using myofascial release for relief. I also promised to share this week what I was doing to relieve the hip pain that had flared up anew in response to my at-home exercise program.

It builds on last week’s post, so if you missed that one, go read it first. I’ll wait! 😀

So…hip pain. It can occur in a lot of different spots around the hip joint. When I was 16 or so, I pulled something in the front of my left hip joint when straightening up from sitting in the car. For nearly two decades after that incident, if I straightened incautiously, I pulled it again. Each time I pulled it, it grew more susceptible to pulling the next time. The problem spread to the right hip. And both sides began to hurt more and more.

I eventually solved the problem by doing leg lifts religiously. Three times a week, without fail, I would lie on my back and lift the left leg 10 times. Then I did the right leg. Three sets of 10 repetitions for each leg.

It worked! My pain diminished, and re-pulling the muscle happened less and less often.

But it is not front-of-the-hip pain that is bothering me now. Nope. The pain is at the back and deep in the joint. 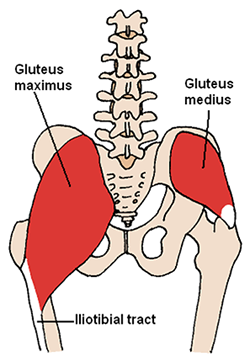 Let’s take a look at the muscles on the back of the hip, since that’s important both to understanding what is happening, and how to fix it.

The biggest muscle, and the one that gives the derriere a lot of its shape, is the gluteus maximus. This is the muscle that should be doing most of the work when you straighten from sitting to standing. I suspect that mine has been shuffling off some of its work to other muscles that are not meant for it, and that is where my pain is coming from.

(We’re looking at the hips from the back in the images at right.) 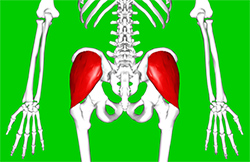 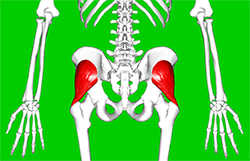 But the majority of my pain seems to stem from a cluster of much smaller muscles underneath the gluteal muscles. 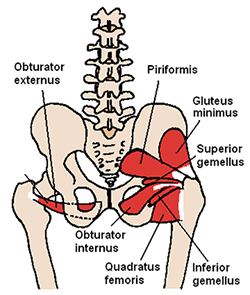 The prime villain is the piriformis muscle.

The piriformis muscle attaches at the front of the sacrum (the base of the spine), and runs sideways at a slant to wrap around the outside of the greater trochanter, the knob at the top of the femur (thigh bone).

At the start of the week, the path of pain mapped quite perfectly along both my right and left piriformis muscles. 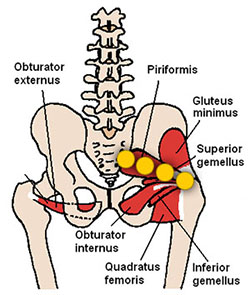 The relief was amazing. It had that “hurt good” sensation while I lay on the ball. And afterward, my hips felt both less tense and stronger.

I found that changing the angle and rotation of my body as I lay upon the Miracle Ball was helpful for digging into different spots where the fascia was restricted. Sometimes it was quite a balancing act! I let my intuition guide me.

Now that I’ve been doing this process for a week (as I type this), I’m finding that the piriformis muscles are calming down. The right piriformis is still tight right at its center, in the “belly” of the muscle and at the end where it attaches to the trochanter. So that is where I focus my efforts.

The left piriformis is problematic largely where it attaches to its trochanter.

But I can now feel that the three muscles beneath the piriformis are painful (on both sides), both in the belly of each muscle and where they attach to the trochanter. 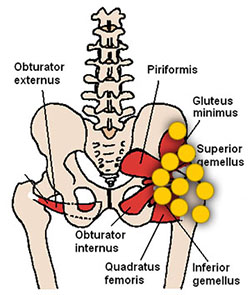 Additionally, the spot at the end of the gluteus minimus where it attaches to the trochanter is painful.

So when my Miracle Ball reaches the outer end of the piriformis, I walk the ball in a semi-circle around the top of the trochanter.

Here’s a video that gave me some ideas for how to position myself on the ball. Notice how the gentleman is balanced on one hip with the opposite hip angled into the air. Once the ball moves away from the spine, the other hip has to rise so that you stay balanced.

Here’s another that gave me ideas for where the hotspots are located, and how to move the legs while on the ball.

The patient is passive and lying on her front. But seeing how the therapist performed the various releases helped me figure out variants for myself. (The release work starts at minute 10.)

The relief is incredible. I can feel the inflammation going down, and I have great hope that not only will the pain resolve completely, but that I’ll eventually be able to walk for exercise again.

I love walking. But every time in the last few years that I’ve tried taking the long walks I adore, this deep hip pain has flared up. Now that I’m using myofascial release on the area, I think I may arrive at a long-term resolution of the problem. Fingers crossed!

I suspect there may be two more pieces of the puzzle, however.

1) Myofascial release of the quadriceps.

2) Mobilizing the gluteus maximus to do its job.

I’ll continue to blog about this particular adventure as it unfolds, but it may be a while before I get to the experiences beyond the piriformis and company.

Important Disclaimer: I am not a medical person in any way. I’m just sharing my journey with the idea that it may point you toward some good questions, if you too suffer from hip pain. Good questions can lead to good answers; coming up with the right question is often the hardest part of solving a problem, in my experience. Just remember that what worked for me may not work for you. Seek out the right experts for help, if you need treatment!

Here are the links to the videos on YouTube:
Activ Chropractic on the Piriformis
iBody Academy on Myofascial Release

Here’s more about my own experiences with myofascial release:
Conquering Back Pain