In the middle of May, I became convinced I should be growing some vegetables. Whether this conviction were truly wise…I remain uncertain. Regardless of the wisdom of the plan, I set about gathering supplies.

The middle of May is certainly leaving it late. And supplies were thin on the ground. Furthermore, finding a suitable spot in our yard was problematic.

Twenty years ago, there was plenty of sun in the front yard. Since then, our cherry blossom tree has grown considerably and the only sunny area is on our front deck.

The back yard has a similar problem. Once sunny, now the maple trees are so tall that it is shady. Even if there were a sunny patch, the herd of deer that regularly roam through would munch any vegetables grown there.

Despite these difficulties, I persevered. We obtained three box planters and set them up on the front deck!

Getting seeds was a challenge as well, and I think I ordered the very last packets that Park Seed had in stock!

But it has all come together and I wanted to show you what I have growing.

Here is my plan for the planter next to my front door. 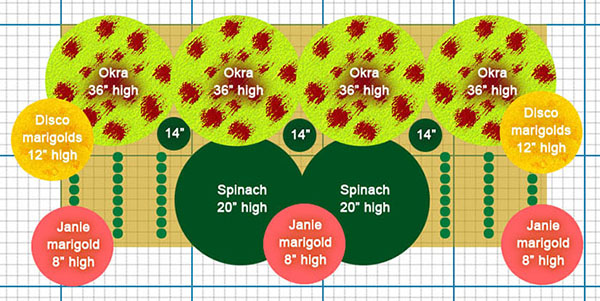 As is often the case, my plan had to adjust once reality hit. When the bare root strawberries arrived, there were 26, six more than the 20 I’d ordered. There was no way I’d toss the extras. I mean, strawberries! I had to find a place for them. So I popped them into the okra bed.

Also, the spinach never germinated. Zip. Bare soil. So I sowed more lettuce there. (Those small green dots all represent lettuce.) It would be too late for lettuce (which bolts in the heat), if I were growing full heads. But I’m doing cut-and-come-again. So I think I’ll get to harvest some before the heat gets it.

Here’s a photo of the “okra bed.” Isn’t it pretty! 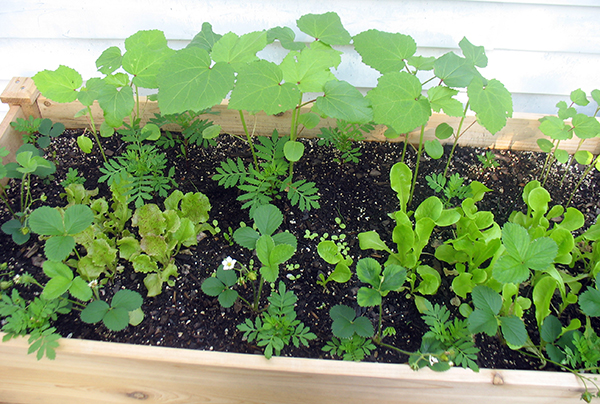 The planter next to the “okra bed” is the “pepper bed.” Originally I thought of it as the “basil bed.” It does have basil in it, but we added a pepper plant when we discovered a local source with curbside pick-up. That pepper plant is so beautiful that it rather overshadows the basil, which is still quite small.

Here is my plan for the “pepper bed.” 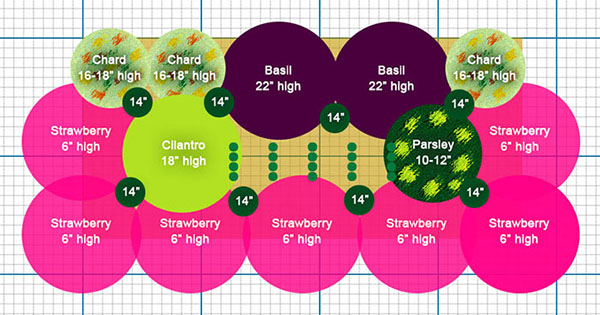 Reality also forced some changes to this bed. Not only did the pepper replace some of the chard, but the lettuce and parsley never came up. So when I thinned the basil, I moved the seedlings to fill those spaces.

Here’s a photo of the “pepper bed.” That tall plant at the left is the pepper! 😀 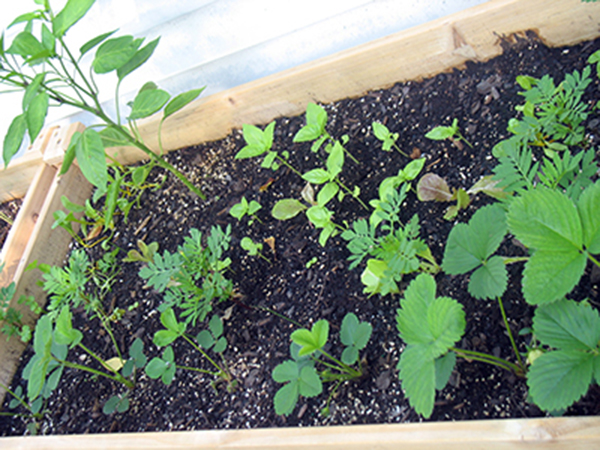 At the far end of the deck, past the “pepper bed,” is the “beet bed.” The “beet bed” has remained closest to its plan, but not identical. Here’s the plan. 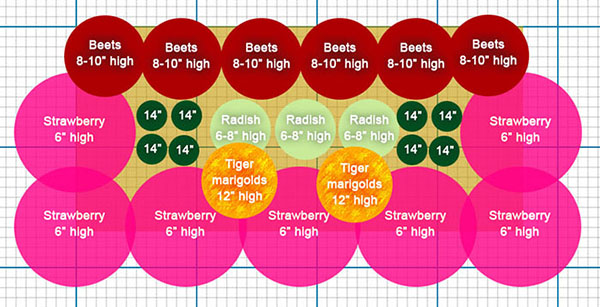 The radishes all moved to the right side of the middle space, while the left side became home to more lettuce, and the green onions were dotted here and there. Here’s a photo of the lettuce side. 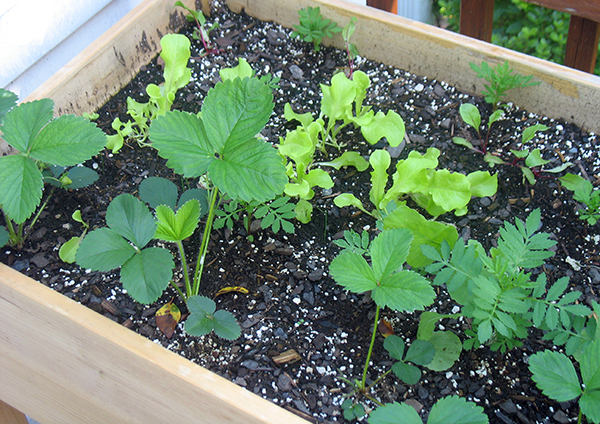 My daughter has been helping me with this mini vegetable garden, and it’s been a lot of fun. Plus it sparked the whole family to renewed fervor for yard work. I’ve enjoyed our time with the four of us all working together. And I really like the beauty emerging from the jungle that our yard had become. 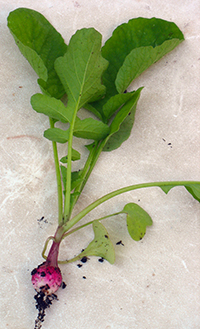 We just harvested our first radish this morning!

As a family project, it’s been a total success.

As a significant addition to our food supplies…not so sure. It’s early days yet, of course. I expect the okra will be the biggest producer, and that will reach harvest much later in the summer. It will be nice to have fresh basil. And the strawberries, fresh from the garden, will be lovely.

But so far, we’ve had enough lettuce for a few salads, and that’s it.

And yet, I don’t regret having put my energy into this. I’m learning new things, which I always love. And the family fun is priceless!