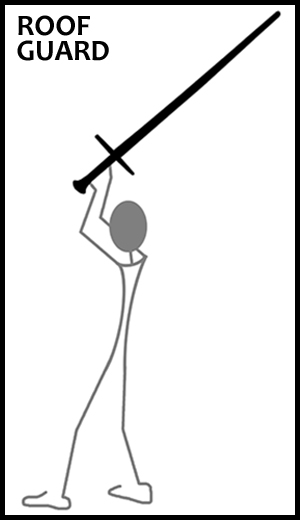 While reading up on long sword fencing, I learned that there are five “master strikes.” They are named master strikes for two reasons.

First, they have a simplicity that makes them accessible to beginners, but they also possess complexity and subtlety for the advanced swordsman.

Second, they combine a strong defense with a strong offense and excellent options for follow-up actions.

An expert swordsman will know many more strikes in addition to the five master strikes, but the five will form the heart of his repertoire.

In this blog post, I’m featuring the strike of wrath. 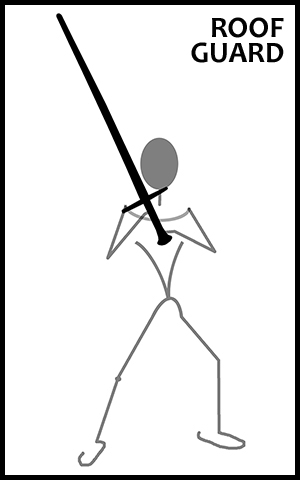 It’s a powerful cut, performed with strength and conviction. It moves from the high reaching roof guard, down in a sweeping diagonal cut, to end in the plow guard.

Those names don’t mean much without more description. Since a picture is worth the proverbial thousand words, I’m sharing some diagrams that I drew, as well as doing some describing.

There are two variations of the roof guard.

One features the sword hilt held slightly above the head and centered, with the blade slightly tilted back.

The other version of the roof guard has the sword hilt held at shoulder height and to one side. Either side will work, depending on the handedness of the swordsman and what he intends to do from that guard. 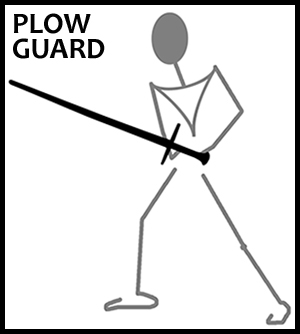 The plow guard, in which the hilt is held at roughly hip height with the blade angled up, can also be assumed on either side, depending on which foot is back and which is forward.

So the strike of wrath goes from the roof guard to the plow guard, and the momentum generated by the blow requires a powerful step forward while performing it.

Two-dimensional pictures are less than ideal for showing the three-dimensional reality of a sword cut. They can give a general idea of what is involved, but videos of the movement are much better.

The first one I’ll share is an instructional sequence. This was perfect for me, a complete layperson regarding long sword fencing. I needed to see the individual segments in order to understand what was going on.

So that was a nice controlled strike of wrath, but not at all how it might look in a real fight.

For a sample of the power and ferocity of the strike, we have another video. 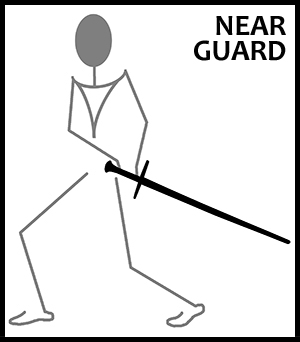 This version of the strike of wrath started from something called a wrath guard and seemed to end in a guard similar to the near guard. The swordsman certainly covered a lot of ground, and he generated a lot of power with his forward motion.

I suspect different schools may teach slightly different versions of each technique.

(Keep in mind that if this post creates a longing within you to learn swordsmanship, you should definitely seek out an instructor. A short text description and a couple of videos might be enough convey a conceptual understanding sufficient for the reader, but are nowhere near enough for learning how to do this stuff.) 😀

Most of the schools of swordsmanship seem to use the German terms for the guards and strikes. No doubt this is because the surviving manuals on swordsmanship from the 1400s and 1500s were written in either German or Italian.

Neither of those languages seemed quite right fro my story Blood Silver, which takes place in a fantasy milieu resembling ancient Ireland. But I didn’t want to use merely the English translations. I wanted something with a little linguistic color. So I created French-influenced terms.

In Blood Silver, the strike of wrath is the coup de colere. 😀

For more about Blood Silver, see:
Plate Armor, How It Works
Cross Strike, Squinting Strike, and Scalp Strike
The Book Title
The Crooked Strike
The Joust
Which Cover to Choose?
Rope Climbing and a Cliff
What If the Sword is Wrong?
A Song of Peace
Wielding a Long Sword
Origin of the Story (The State of This Writer)