When I’m world building for a fantasy novel, I do a lot of research. I’m sure some writers are able to create cultures and hierarchies and organizational trees straight from their heads that are as detailed and irregular as the real thing. But when I do that, my creations are a little too neat and tidy, a little too logical, to have the feel of reality. 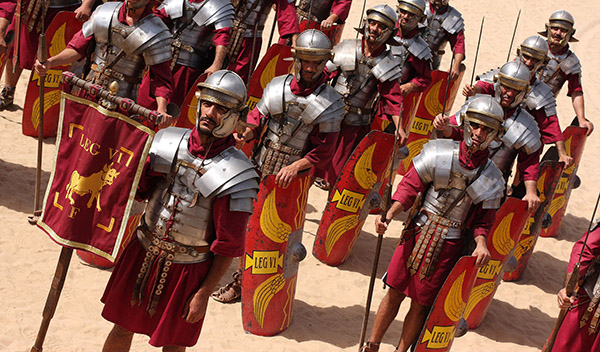 So I choose a period of history and a place in our world that has a lot of the right features for my purposes, research it, and then map it onto my world, tweaking the details as needed to make it fit.

When I was creating the society for Belzetarn, the citadel in which The Tally Master takes place, I researched the kitchens of Hampton Court during the reign of King Henry VIII, because they provided a good model for Belzetarn’s kitchens.

Of course, the time period of Henry VIII was much later than my own Bronze Age setting. Which meant that I eliminated such places as the wafery (which relied heavily on sugar and grains), the confectionery, and the pastry yard. But the complexity of Hampton Court was perfect.

I modeled the military hierarchy of Belzetarn after the armies of ancient Rome. Rome was an Iron Age civilization, but the effectiveness of its legions was matched by my warlord’s effectiveness.

The main reason humans switched from bronze weapons to iron weapons was because tin was so darn rare. And one needs tin in order to combine it with copper to make bronze. There just wasn’t enough tin, with deposits close at hand, to outfit hundreds of thousands of soldiers.

The early iron weapons were inferior to the late bronze ones, because bronze metallurgy had been honed over millennia to produce superb results, while no one knew the best techniques for iron. But there was a lot more iron, with more convenient locations. So the switch was made. 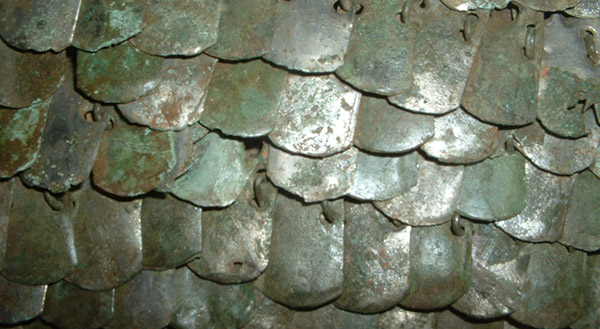 By the time the Romans came along, iron metallurgy was well developed. But imagine a world in which tin was more prevalent. In such a world, the Romans might have been just as dominant with bronze weapons.

Belzetarn is not Rome. It’s not even a North-lands analog to Rome. It’s a lone outpost of desperate men – trolls – commanded by an exceptionally able warlord, Carbraes. But it’s large enough to field two legions, roughly 10,000 men. And the hierarchy of Rome’s military could be mapped nicely onto Belzetarn’s military.

I knew that ancient Rome had legions, cohorts, and centuries. I knew that within those units were legates and tribunes and centurions. But I needed a lot more detail than that. So I went researching.

I learned that a legion was composed of ten cohorts, that a cohort was composed of six centuries (except the first, which had only five), that a century possessed only eighty men, and that they were divided into 8-man squads. 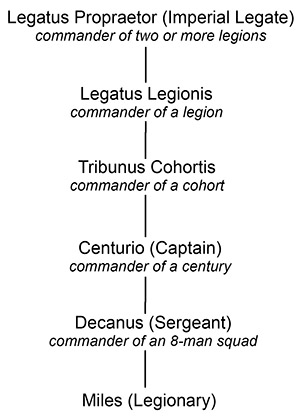 Actually, in the early days, a century had one-hundred men, but that number dwindled as the years rolled past. Then it increased to one-hundred-twenty men when the time of foreign conquest arrived. And then dwindled again. But never mind that. I was going to show Belzetarn at one instance in time, not write its history through the ages.

Information on legions and cohorts and centuries was fairly easy to find. What I really needed, however, was a listing of the ranks within them. A detailed listing.

I was delighted to find it on a site called HorridHistory.

Legatus Propraetor (Imperial Legate) – commander of two or more legions; in modern terms, a general
Legatus Legionis (Legion Legate) – commander of one legion
Tribunus Laticlavius (Broad Band Tribune) – second in command of the legion, although not during battles, because the men holding this post were young and inexperienced, new senators at the start of their political careers
Praefectus Castrorum (Camp Prefect) – second in command of the legion during battles; the men of this rank were chosen for their experience
Tribuni Angusticlavii (Narrow Band Tribunes) – five per legion; serve as administrative officers; in modern terms, majors
Tribunus Cohortis – commander of an entire cohort (6 centuries in a cohort, 10 cohorts in a legion)

Where the Real Work Gets Done

Decanus – commanded an octet, or a eight-man squad
Miles Gregarius – title given to a legionary who performed exceptionally well in battle
Miles – a normal legionary 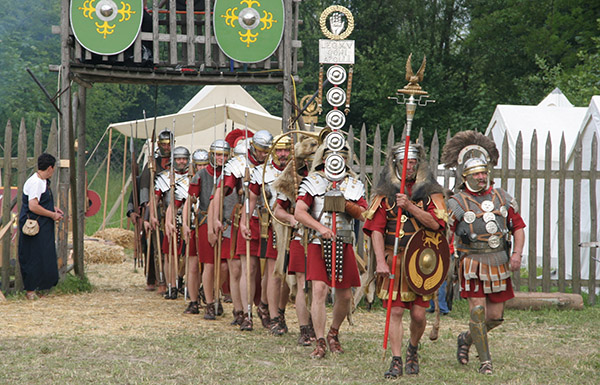 So far, so good. But I could not simply borrow all the Roman terms. If I did that, Belzetarn would feel like an outpost in ancient Rome. And it’s not!

So I started mapping our world onto my North-lands, adjusting structures and creating my own terms. I kept a few of the Roman terms, just enough of them to orient the reader. 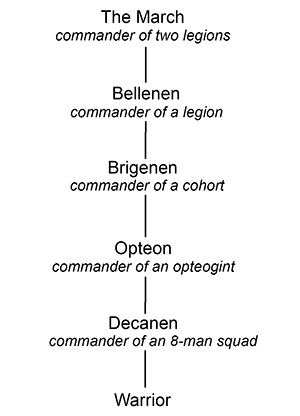 I worried that I might need a terms for the equivalent of the Roman Tribunus Laticlavius, the second in command of a legion, or the Tribunus Augusticlavius, who seemed sort of like British aides-de-camp during the regency period.

So I came up with Magno and Agusten, respectively.

I tried to carry on with filling out the hierarchy of seconds in command and thirds, but I was running out of inspiration. Plus, I figured that while The Tally Master takes place in a military citadel, its protagonist is not one of the warriors or their officers. He controls the flow of metal from the mines through the forges and into the armories as weapons. The focus of the story is on his tally room and the smithies. I could develop more military titles when and if I needed them!

Last weekend The Tally Master came back to me from my first reader, and she’s given me awesome feedback. As usual! I’m currently doing a little more research – needed for the fixes I envision – and then I’ll start revising.

I’m excited! This is going to be one of my best books ever! 😀