The third tapestry in The Hunt of the Unicorn cycle depicts the murderous attack initiated by the royal huntsmen upon the unicorn when they bring him to bay in the forest.

I found it interesting that five of the six spears wielded have the metal crosspiece of a boar spear. That crosspiece is present because wild boar were incredibly dangerous beasts. Even with a spearhead jammed down their throats and lodged there, they were known to slam themselves up the spear with sufficient ferocity that the spearsman might die of their attack. The metal crosspiece impeded such a charge.

Evidently the ferocity of a unicorn was deemed equal to that of a wild boar! 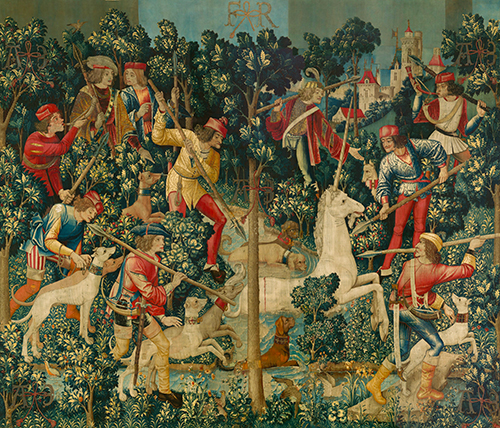 As I wrote my own version of The Hunt of the Unicorn, I found the story told by the tapestries of that name becoming a central element in my narrative.

The unicorn of the tapestries is sought in the woods, located by the royal huntsmen, pursued, and challenged with spears. Mine is also.

But while the characters of the tapestries are archetypal, representing our collective human experience of Maiden, Fabulous Beast, and Nobleman, mine are specific individuals with their own quirks, personalities, and names.

Nor do the events of my story dovetail exactly with those depicted in the tapestries.

Yes, my huntsmen go into the forest to find the unicorn, but their reason for doing so is all their own. And when they find the beast . . . well, let’s just say that a spiritual battle takes place alongside the physical one.

Despite these differences and others, I drew heavily on the tapestries for my world building. 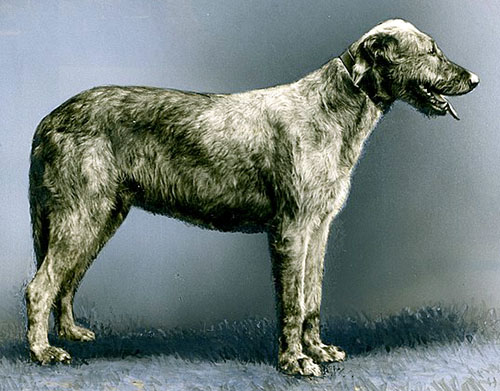 I had taken the hounds in the tapestries to be deerhounds, but those boar spears gave me pause, as did the unicorn’s reputation for fighting prowess. I eventually decided that Irish wolfhounds would be required!

As I read about Irish wolfhounds, I learned that their origins go back to the prehistoric Celts, when the hounds fought alongside their masters as war dogs in battles against their enemies. In later centuries, they did indeed hunt wolves.

They are very large, very strong, and very fierce in a fight. Despite their effectiveness in the hunt (or in battle, during ancient times), their disposition is mild, peaceable, reserved, and easygoing. They get very attached to their owners and any dogs they are raised with, and become morose if separated from them.

The hounds in my story are definitely wolfhounds!