The legendary unicorn is too fierce to suffer defeat from mere huntsmen and hounds.

When they find him, he runs at a speed hard to match. When they bring him to bay, he fights and prevails.

Only the magic of a maiden can subdue him. 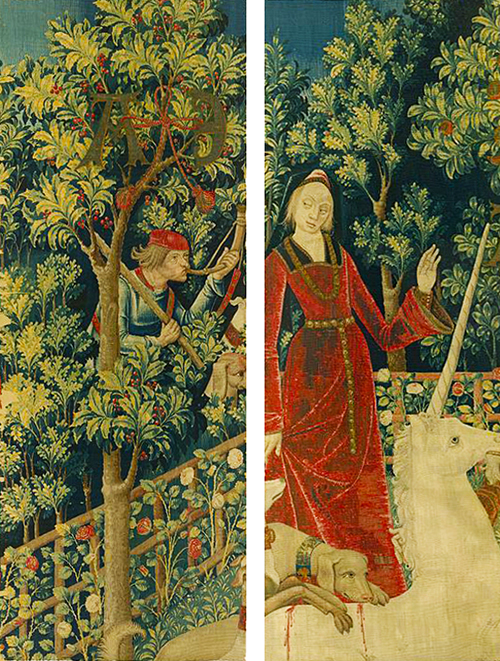 But how does this mystic capture transpire? Does the beast grow docile in the presence of a maiden and lay its head in her lap or upon her breast as the medieval bestiaries assert?

The tapestry in the unicorn cycle that depicted this mystic moment was damaged, and only two fragments remain.

In the fragment with the maiden, we also see a hound lunging for the unicorn’s back, or perhaps for its flank, where blood is visible. The unicorn may be docile, but its capture seems likely to be violent. 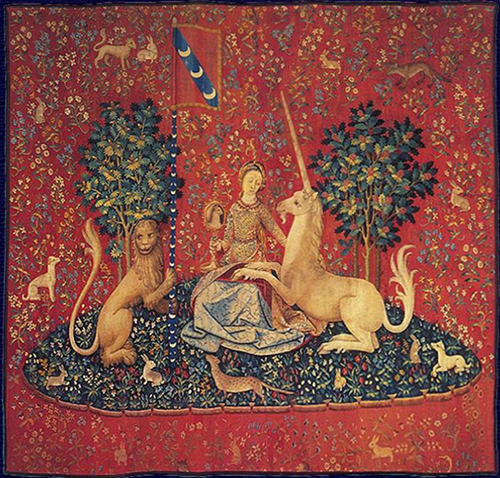 My own story, The Hunt of the Unicorn, diverges from the medieval legend at several points, but it does have one supremely peaceful vignette. My unicorn remembers his first moments of life after his birth.

He is ever so weak and wobbly when he tries to stand. But before he makes that effort, he knows contentment and security in the warm presence of his mother.

I imagine unicorns as possessing many of the attributes of horses. One of the equine characteristics I remember reading about is the difference between how humans relate to touch and how horses relate to it.

We humans are very cuddly, by and large. We hug, we pat each other, we hold one another, we stroke the head, and so on.

Horses aren’t cuddly. As herd animals, they take great comfort in the presence of their herd mates. (A lone horse is a horse vulnerable to predators.) They also literally throw their weight around to communicate. The nudge their foals. They hip check or shoulder check one another to assert dominance.

So when my unicorn was born, his mother nuzzled him and nudged him. But it was her quiet presence that he found most comforting.

I discovered a video of a newborn foal and its mother that captured perfectly the interval after my unicorn’s birth.