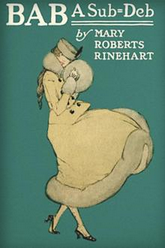 It’s been years since I posted any book recs here, but my recent re-reading of Bab, a Sub-Deb by Mary Roberts Rinehart has inspired me. It’s an utter delight of a book, the heart of which is the voice of its 17-year-old protagonist.

Bab is naive, determined, and unique, so much so that all the description in the world cannot convey her quality. So rather than trying, I’ll simply quote the young lady.

I have decided to relate with precision what occurred during my recent Christmas holiday. Although I was away from this school only four days, returning unexpectedly the day after Christmas, a number of Incidents occurred which I believe I should narrate.

It is only just and fair that the Upper House, at least, should know of the injustice of my exile, and that it is all the result of circumstances over which I had no control.

For I make this appeal, and with good reason. Is it any fault of mine that my sister Leila is 20 months older than I am? Naturally, no.

Is it fair also, I ask, that in the best society, a girl is a Sub-Deb the year before she comes out, and although mature in mind, and even maturer in many ways than her older sister, the latter is treated as a young lady, enjoying many privileges, while the former is treated as a mere child, in spite, as I have observed, of only 20 months difference? I wish to place myself on record that it is NOT fair.

I shall go back, for a short time, to the way things were at home when I was small. I was very strictly raised. With the exception of Tommy Gray, who lives next door and only is about my age, I was never permitted to know any of the Other Sex.

Looking back, I am sure that the present way society is organized is really to blame for everything. I am being frank, and that is the way I feel. I was too strictly raised. I always had a governess tagging along. Until I came here to school I had never walked to the corner of the next street unattended. If it wasn’t Mademoiselle, it was mother’s maid, and if it wasn’t either of them, it was mother herself, telling me to hold my toes out and my shoulder blades in. As I have said, I never knew any of the Other Sex, except the miserable little beasts at dancing school. I used to make faces at them when Mademoiselle was putting on my slippers and pulling out my hair bow. They were totally uninteresting, and I used to put pins in my sash, so that they would get scratched.

Their pumps mostly squeaked, and nobody noticed it, although I have known my parents to dismiss a Butler who creaked at the table.

When I was sent away to school, I expected to learn something of life. But I was disappointed. I do not desire to criticize this institution of learning. It is an excellent one, as is shown by the fact that the best families send their daughters here. But to learn life one must know something of both sides of it, male and female. It was, therefore, a matter of deep regret to me to find that, with the exception of the dancing master, who has three children, and the gardener, there were no members of the sterner sex to be seen.

The athletic coach was a girl! As she has left now to be married, I venture to say that she was not what Lord Chesterfield so euphoniously termed “SUAVITER IN MODO, FORTATER IN RE.”


.     .     .
At the school dances we are compelled to dance with each other, and the result is that when at home at Holiday parties I always try to lead, which annoys the boys I dance with.

Notwithstanding all this it is an excellent school. We learn a great deal, and our dear principal is a most charming and erudite person. But we see very little of life. And if school is a preparation for life, where are we?

Being here alone since the day after Christmas, I have had time to think everything out. I am naturally a thinking person. And now I am no longer indignant. I realize that I was wrong, and that I am only paying the penalty that I deserve although I consider it most unfair to be given French translation to do. I do not object to going to bed at nine o’clock, although ten is the hour in the Upper House, because I have time then to look back over things, and to reflect, to think.

“There is nothing either good or bad, but thinking makes it so.” SHAKESPEARE.


.     .     .
I now approach the narrative of what happened during the first four days of my Christmas Holiday.

For a period before the fifteenth of December, I was rather worried. All the girls in the school were getting new clothes for Christmas parties, and their Families were sending on invitations in great numbers, to various festivities that were to occur when they went home.

Nothing, however, had come for me, and I was worried. But on the 16th mother’s visiting Secretary sent on four that I was to accept, with tiped acceptances for me to copy and send. She also sent me the good news that I was to have two party dresses, and I was to send on my measurements for them.

One of the parties was a dinner and theater party, to be given by Carter Brooks on New Year’s Day. Carter Brooks is the well-known Yale Center, although now no longer such but selling advertizing, ecetera.

It is tragic to think that, after having so long anticipated that party, I am now here in sackcloth and ashes, which is a figure of speech for the Peter Thompson uniform of the school, with plain white for evenings and no jewelry.

It was with anticipatory joy, therefore, that I sent the acceptances and the desired measurements, and sat down to cheerfully while away the time in studies and the various duties of school life, until the Holidays.

However, I was not long to rest in piece, for in a few days I received a letter from Carter Brooks, as follows:

DEAR BARBARA: It was sweet of you to write me so promptly, although I confess to being rather astonished as well as delighted at being called “Dearest.” The signature too was charming, “Ever thine.” But, dear child, won’t you write at once and tell me why the waist, bust and hip measurements? And the request to have them really low in the neck? Ever thine, CARTER.

It will be perceived that I had sent him the letter to mother, by mistake.

I was very unhappy about it. It was not an auspicious way to begin the holidays, especially the low neck. Also I disliked very much having told him my waist measure which is large owing to basket ball.


.     .     .
…and I went on home alone. And all at once I began to be embittered. Sis had everything, and what had I? And when I got home, and saw that Sis had had her room done over, and ivory toilet things on her dressing table, and two perfectly huge boxes of candy on a stand and a ball gown laid out on the bed, I almost wept.

My own room was just as I had left it. It had been the night nursery, and there was still the dent in the mantel where I had thrown a hair brush at Sis, and the ink spot on the carpet at the foot of the bed, and everything.

Mademoiselle had gone, and Hannah, mother’s maid, came to help me off with my things. I slammed the door in her face, and sat down on the bed and RAGED.

They still thought I was a little girl. They PATRONIZED me. I would hardly have been surprised if they had sent up a bread and milk supper on a tray. It was then and there that I made up my mind to show them that I was no longer a mere child. That the time was gone when they could shut me up in the nursery and forget me. I was seventeen years and eleven days old, and Juliet, in Shakespeare, was only sixteen when she had her well-known affair with Romeo.

I had no plan then. It was not until the next afternoon that the thing sprung (sprang?) fullblown from the head of Jove. 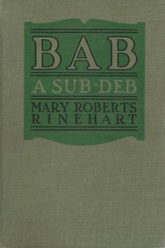 Is she not delicious?

Bab’s plan gets her into ever-more-complicated and amusing trouble as her story unfolds. We, the readers, receive a much clearer view of events than does Bab herself, but this leads only to our entertainment without any diminishment of sympathy for the protag.

Published in 1916, the narrative takes place shortly before the United States declared war on Germany (WWI) and in a culture very different from that of 2019. Bab is shaped by her milieu, but transcends it, coming across as thoroughly human. I recommend her with my highest praise!

Bab, a Sub-Deb is in the public domain and available as an ebook on Amazon for free.