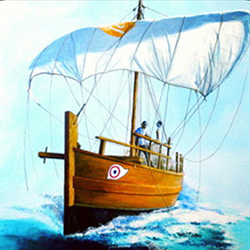 When Nerine – the heroine of Fate’s Door – went aboard the Lily of Aegyptus with her friend Altairos, I needed to know more about the trading vessels of the ancient Mediterranean.

Studying ships that sailed more than 2000 years ago is a difficult proposition. They were made of wood and usually ended their days on the bottom of the sea, where their timbers rotted.

Luckily for me – and interested scholars – in 1965, a sponge diver named Andreas Cariolou discovered the well-preserved wreck of an ancient trading vessel near Kyrenia, Cyprus.

More than 50 underwater archeoligists, students, and technicians cooperated to photograph the site and then retrieve the artifacts from the sea floor. Every piece of the ship itself and its contents has been extensively studied, with the result that we now know much more about sea trade in the Hellenistic era than we did before. 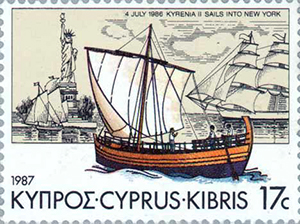 The Kyrenia ship was propelled by one square sail, and only four mariners managed her: a captain and three crew. There were four oars aboard for maneuvering within harbors and other tight quarters, but she depended on the wind to travel from port to port. She possessed two steering oars at her stern, but usually only one of them was needed to guide her. 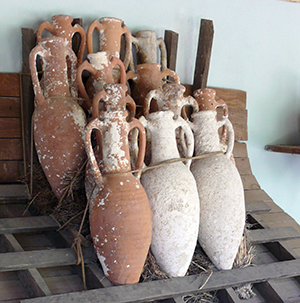 Decking at the stern provided a level surface on which to stand in addition to a smaller deck at the prow. But most of the ship was reserved for the cargo she carried. When she sank – probably scuttled after pirates captured her, took her crew to sell as slaves, and stole the captain’s store of coin – she was carrying 404 amphorae, containing wine, olive oil, almonds, and fruits.

Carbon dating tells us that the Kyrenia ship was built around 389 BC and probably operated by three generations of a merchant family. The almonds she was carrying when she sank were picked around 288 BC. Which means she was exactly the sort of trading vessel in use during the time of Fate’s Door, which takes place between 344 BC and 329 BC.

I modeled my Lily of Aegyptus after the Kyrenia ship.

There’s a fun sequel to the discovery of this ancient vessel. Experimental archaeologists have taken to reconstructing artifacts using the methods of the original creators to better understand how these old cultures functioned. The Kyrenia ship has generated three such reconstructions, one focused on the original construction methods (the Kyrenia II) and another focused on the ancient sailing methods (the Kyrenia Liberty).

For more about the world of Fate’s Door, see:
Measurement in Ancient Greece
Horse Sandals and the 4th Century BC
Knossos, Model for Altairos’ Home