When Nerine, the heroine of Fate’s Door, set off on a journey across Európi in 334 BC, I needed to know the units of measurement that her guides – the Poniró Peltastés of Hermes – would speak of.

Sure I could have them talking of miles and leagues. After all, any civilization in which people travel will have the equivalents of those distances. Why not just use terms that many readers will be familiar with?

I could have. Indeed, I would have to, if the ancient terms proved too difficult or obscure. But I dove into research first.

Along the way, I became sidetracked by smaller units of measurement used by the ancient Greeks and, indeed, the entire Hellenistic world.

The translations of the ancient Greek terms charmed me. There is something so practical and sensible in units such as a ‘finger’ or a ‘palm.’

Before I tell you about my decision regarding miles and leagues, I’m going to take you with me to look at the smaller units. Not all of them. There are too many for that. But a few of those that interested me most. 😀

The smallest is indeed the ‘finger’ or daktylos. In modern terms, that’s .76 inches or 19.3 millimeters. I suppose it was used as I might use an inch.

The palaiste or doron is four ‘fingers’ or a ‘palm.’ Which makes me think of the ‘hands’ used to indicate the size of a horse. In ordinary modern units, that’s 3.04 inches or 77.1 millimeters.

Then there’s the dichas or hemipodion, which is the ‘half foot’ – 6.07 inches or 154.1 millimeters – no doubt a handy unit. But the unit that absolutely beguiles me is the spithame, the ‘span of all fingers.’ I’d love to speak of a loaf of bread as long as a spithame! I might one day, even though it will get me strange looks.

The pous or ‘foot’ is 12.13 inches, quite close to the foot that I am used to. Or, with less immediate correspondence in metric: 308.2 millimeters.

The pygme or ‘forearm’ is amazingly close to the pous. Did the ancients really need both units? 13.65 inches or 346.8 millimeters for the pygme.

The last of the smaller units of length is the pechys or, as the ancient Romans would say, the cubit. Which approximates the length from the fingertips to the elbow. That is, 18.2 inches or 462.3 millimeters.

Of course, as fascinating as I found these ancient units, the shorter ones were not what I needed for my story.

The so-called ‘longer’ units start at the pous or ‘foot’ and go on up through various numbers of paces. But what I wanted were the units with which one might measure a journey. Something equivalent to miles or kilometers.

There were two sorts of ‘leagues’ that seemed promising. The parasanges was adopted from Persia and measured 3.447 miles (or 5.5 kilometers). Or I could choose the ‘league’ adopted from the Egyptians, the schoinos which was 4.596 miles (or 7.4 kilometers) long.

After all that research, I decided that both the parasanges and the schoinos were too difficult and obscure to use. I settled for the familiar league, and started writing Nerine’s journey north from the Aegean Sea to the Baltic Sea.

And guess what happened?

I mentioned the unit of a league once! Maybe twice. Because Nerine’s attention was not on how far she traveled. She was interested in the people she met, the strange cultures she encountered, and the startling things she was learning about herself.

I did require a unit of measurement when she gazed across the river Moirios (the Great Morava), near its mouth, and marveled that it must be a full stadion across. And again, when she worried about how they would cross the river Danouvios (the Danube), because it was more than four stadia wide. 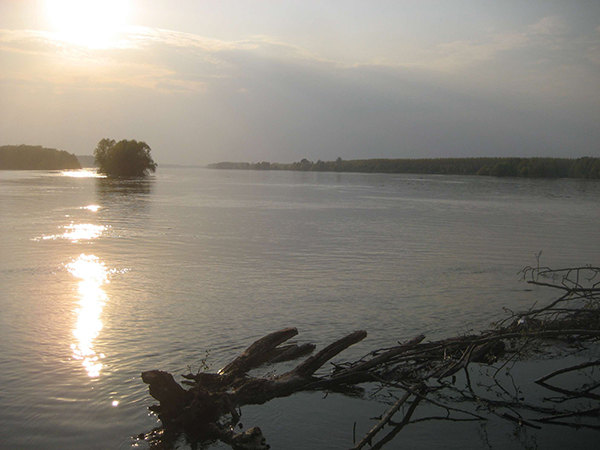 But I’d already determined that the stadion was the unit I needed when a much-younger Nerine first looked at a map of Lapadoússa (the modern Lampedusa), the isle where her land-dwelling friend Altairos lived. (Nerine is a sea nymph and lives in a reef palace under the water.)

For more about the world of Fate’s Door, see:
Horse Sandals and the 4th Century BC
Knossos, Model for Altairos’ Home