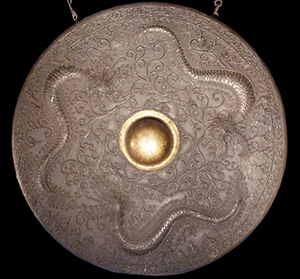 When I wrote the story Resonant Bronze, I needed to know more about gongs.

The type of gong most familiar to Westerners is the bullseye gong or tam-tam. A tam-tam is made of brass (copper and zinc) or bronze (copper and tin). It’s nearly flat with a very shallow curve. And the rim is turned to be perpendicular to the gong’s surface.

Tam-tams yield a crashing sound when hit. They were originally used in China to signal the peasants working in the fields. They could be heard up to 50 miles away!

But the gong featured in Resonant Bronze is not a tam-tam. It’s a nipple gong.

Nipple gongs possess a central raised boss that is often formed of a different metal than the rest of the gong.

Such is exactly the case for the gong in Resonant Bronze. Its central boss is made of meteoric iron, while the rest of its wide circle is formed of arsenical bronze (copper and arsenic). Thus its silvery color.

Nipple gongs have a clearer, more resonant tone than tam-tams, with less “shimmer.” Small nipple gongs are often suspended horizontally (rather than vertically) and played together as you might play a xylophone.

The gong in Resonant Bronze is large – roughly 3 feet in diameter – and hangs vertically.

One of the most interesting things I learned in the course of my research involves the unique forging properties of bronze.

Bronze does not behave like this when slow cooled. In fact, it becomes excessively brittle and difficult to work.

Bronze must be heated to cherry-red and then quenched in water. This quick cooling makes it so soft that it can then be hammered. Thus a gong is first heated, quenched, and shaped. Then it is heated again and slow-cooled to harden it.

While modern bronze is composed of copper and tin – from 8 to 22 parts of tin for every 78 parts of copper – the ancients used arsenic instead of tin. This resulted in several advantages.

The arsenic acted as an de-oxidizer, causing the extra oxygen sometimes present in liquid copper to evaporate as various arsenous oxides, yielding a more malleable bronze.

The presence of arsenic also produces a greater work hardening of the metal without causing embrittlement. (Especially important for cutting and chopping tools, not as important musical instruments.)

And, finally, the arsenic creates an attractive silver sheen to the metal’s surface.

Arsenic is present in many of the copper ores in the ground, but the ancients also added arsenic themselves.

Unfortunately, arsenic within an alloy also possesses some serious disadvantages. Arsenic vapor attacks the eyes, lungs, and skin of the smith, as well as causing neurological damage that results in weakness in the legs and feet. It is speculated that this fact of neuropathy lies behind the archetype of lame smiths such as the Greek god Hephaestus. 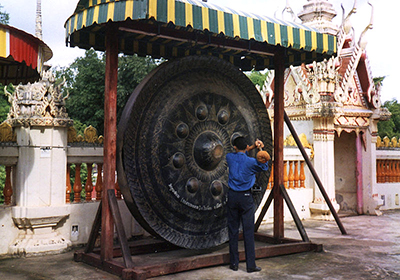 This is one of those times I was super glad I’d done my research! It would have been so easy to get this wrong. My natural inclination is to research topics I don’t know much about. I just don’t feel comfortable writing my story when there’s an important element in it and I’m ignorant. Of course, it’s not just wanting to get the details right that propels me. I’m also insatiably curious! 😀

For more about the facts behind my stories, see:
Origin of Canning
The Accidental Herbalist
Roman Dining