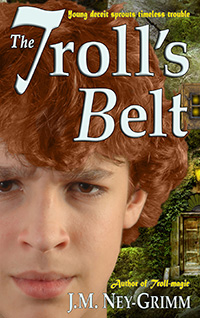 I had no idea I’d be retelling a renowned folk tale. All I had was the really vivid mind-picture of a wide leather belt, dyed brilliant blue and studded with golden metallic stars, nestling in the reindeer moss of a pine forest. That and the knowledge that a boy would find it.

So, how did I build my story? I almost always start with questions. Who is this boy? Oh, he lives with his father, but there seems to be no mother on the scene, and I have the sense that she’s been absent since he was a baby. Okay. Then how did his father manage? Ah . . . his brother’s wife took care of the boy when he was really little. The two brothers, when they were very young men, purchased a timber claim from Silmaren’s Queen Anora.

My notes show that I digress into examining the nature of the timber claims and fishing claims offered by the crown at this point in the realm’s history. Then I pull myself back to the boy and sketch out a quick account of his childhood. Next my thoughts leap to the skeleton of my story’s plot: the boy finds the belt, he gets in trouble with it, and he only achieves some wisdom in the course of overcoming his trouble.

Hmm. This is the North-lands. If there’s trouble, then of course there’s a troll involved. Surely the belt belongs to this troll. And . . . suddenly, I just know that the troll lives in a rustic cot hollowed from a massive glacial rock.

Naturally, the boy encounters the troll, who wants his belt back. And, oh my, he wants the boy for dinner. Oh! I’m telling Hansel and Gretel. Cool! I think I like it. 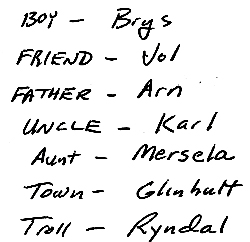 So the boy is imprisoned and that mad old troll is going to devour him. Then the boy’s cousin arrives on the scene, and things get even more complicated. Now I need some names. I can’t just keep saying: “the boy” and “the boy’s father” and “the wood-town.” What all do I need? Boy, cousin, father, uncle, aunt, town, troll. This time, for this story, the names just fly into my head without much searching for inspiration.

Then I realize I need to know what the town of Glinhult looks like. At first I think everyone lives in tree houses, but that doesn’t feel quite right. Ah! The older houses are indeed tree houses, remnants from the time when the lumberjacks needed a cheap way to raise their homes off the ground for safety’s sake. Packs of wolves and other predators roam these parts, the wilds of west-lying Gosstrand. Once the work on the timber claim was more advanced and everyone had more money, they could afford to build the more convenient stilt-homes.

So what did Brys’ home look like? I draw a quick floor plan. And make some notes about its idiosyncrasies: the straight door at the bottom of the stairs and the trap at its top. Then I think about what Brys and Jol look like: Brys with shoulder-length red hair; gangly; shorter than his cousin; Jol a bit larger and with long, curly, dark hair pulled back in a horsetail. What chores do the boys do? Suddenly I know that Brys and his father Arn will have an argument about chores. And the specifics of the plot unfold in my mind. I’m there. Time to start writing. On October 20, I begin: “Brys slammed the door behind him and stomped across his room in fury.” 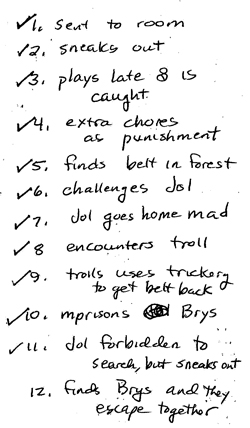 Each day thereafter I write another installment of the story. Sometimes the scene is so clear, it pours out of my pen (yes, I was writing longhand, ink onto paper) like an enchanted spring welling from sacred ground. Other times I make notes or mini outlines in my margins to get my inner storyteller going: “skip to meeting Jol who is impressed with his daring, but also pretends to object to the tunic borrowing;” or “clasp belt, sudden urgency as body joins mind, leap up, know just what to do.”

On November 4, I write the final words: “’Huh, yourself!’ And Brys aimed a friendly punch at his cousin’s ribs.”

I’d done it! Written the story I would use to test the intricacies of uploading computer files to electronic bookstores. Best to encounter all the error messages and to search for fixes on a short piece of fiction, not a novel!

Of course, I was not finished. I sent the story off to my first reader, who quite liked it. I would work on the cover while she was reading. Then I must make corrections and put the whole package together. Yes, there was work to do. But that moment of triumph at the close of the first draft was special.

Just in case The Troll’s Belt has suddenly catapulted itself onto your must-read list (grin!), here are the links:

Amazon.com I B&N I Diesel I iTunes I Kobo I Smashwords I Sony

For more about the stories behind my stories, see:
Writing Sarvet
Notes on Chance
Dreaming the Star-drake