Although I draw inspiration from the history and cultures of the real world for my stories, I don’t reproduce reality wholesale. Which means that when I seek out images to represent elements of my fiction, I rarely find any that exactly match the visions I entertain in my imagination. I must make due with photographs and artwork that are almost what I have in mind, or close.

Luckily, almost and close often convey quite a bit. 😀

One consistent feature of Hantidan garb is that it possesses an asymmetric closure, with fastenings that run down the front, along one side, from neck to hem. 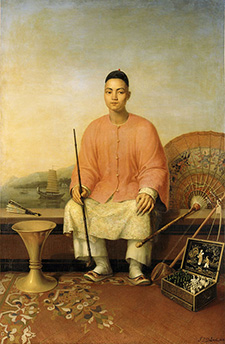 The peasants who work in the rice paddies, fish the river, or cut reeds in the wetlands wear linen jackets over skirts or wide trousers. Their garb needs to be practical, permitting free movement of the limbs, durable, and comfortable in the hot, humid climate.

The portrait of Kan Gao (at right) does not have the Hantidan side closure, but the jacket, skirt, and trousers otherwise mimic the Hantidan garb of a country laborer quite well. 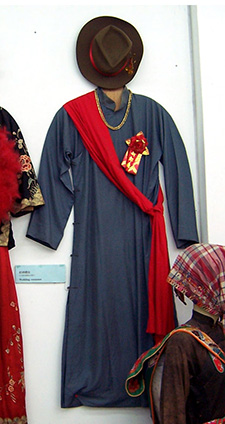 A sash worn over the shoulder secures a pouch for carrying coin, abacus, or other tools used often in their respective trades. 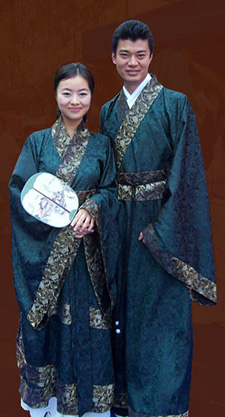 The garments worn by the hanfu promoters at right are secured by sashes, whereas my Hantidans would find a snug binding around the waist too hot. But aside from that detail, the dark green silk and monochrome edgings are very like some of the robes Gael and Keir see while sojourning in the Glorious Citadel.

Dark green, dark blue, and dark yellow are common colors, as is dark gray, the robes donned by Gael and Keir. 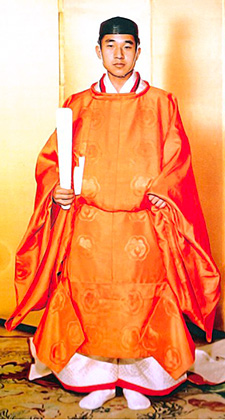 The sokutai attire shown at right depicts the shimmering brilliance typical of garments worn by the rich and powerful of Hantida, but lacks the asymmetric neckline and side closure of their robes. 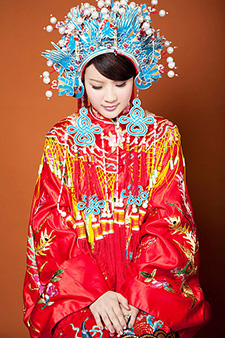 Only the elite among the nobility are permitted to wear elaborate, patterned brocades. Their luxurious robes are commonplace within their city palaces, on their country estates, and within the Glorious Citadel.

But they are rarely seen on the streets of Hantida. The elite take the air in secluded courtyards and gardens or hunt on broad private acreage. When they travel from one city residence to another, or from rural estate to urban mansion, they occupy curtained palanquins more often than not.

The first such robes encountered by Gael and Keir are fashioned of “an ornate brocade depicting herons lifting in flight.” The second feature “a tracery of green leaves and lizards upon a bronze ground.” 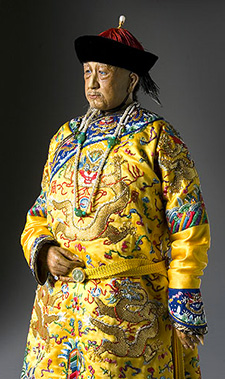 The traditional wedding dress (above at right), although beautiful, would be considered a simpler design among the high nobility of Hantida.

The robes worn by Emperor Qianlong (immediate right) are more typical garb for the highest of the high Hantidans. 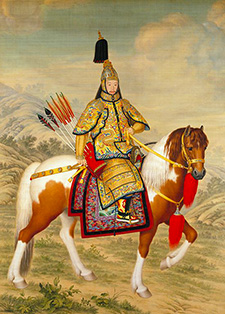 The guards standing sentry duty on the walls of the Glorious Citadel wear bronze scale mail, but the silhouette of their armor is very similar to the ceremonial armor depicted in the portrait (right) of Emperor Qianlong.