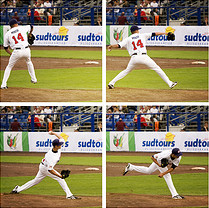 Those of you who read my blog regularly will know that I’m insatiably curious. And those of you new to this web space . . . are about to find out! <Grin!>

I’m sure some of you say from time to time: why in the world does she care about that? But I hope that at least a few of you say: oh, cool!

That was my reaction when I read D.J. Gelner’s split-second-by-split-second description of a pitch in the game of baseball.

And you know the rest: I couldn’t resist sharing it with you!

Gelner is also a writer of fiction. Just a week ago, I read the first two parts of his three-part serial Hack. I was enthralled, despite the story’s marked difference from the type of fiction I usually prefer. That writer’s got magic in his fingertips! But, for now, we’ll focus on this non-fiction piece by him. 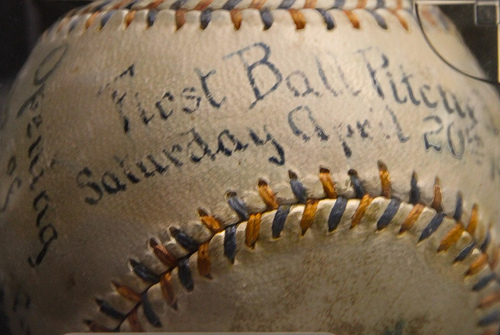 Why It’s So Tough to Hit a Fastball

It’s often said that hitting a baseball is the most difficult single activity in all of sports.

While folks may dispute the assertion, there’s no denying the fact that attempting to launch a fast-moving projectile in the other direction using nothing more than a finely-crafted club is incredibly tough to do.

A typical major league fastball travels somewhere between 90-95 miles per hour, which translates to 132-139.3 feet per second. That means that a batter only has between .434 and .458 seconds before the ball hits the catcher’s mitt.

Lets take a look at the various stages a pitch travels on its way to a hitter.

In this tiny window of time, the batter watches for tiny, almost imperceptible clues as the ball leaves the pitcher’s hand. Whether the ball comes out-and-up (curveball), drops a bit (changeup), cuts horizontally after release (slider), or stays relatively flat (fastball), the veteran batter is able to recognize this movement, and use the information to begin the process

This is where the batter picks up the spin on the ball, and his initial instincts regarding the type of pitch and its location are confirmed.

A batter normally recognizes a major league fastball by the apparent lack of spin. This is because all of the other pitches he sees have tell-tale “spin signatures.” Curveballs look like large, rotating circles in the middle of the ball. A slider tightens this circle up somewhat, and the movement on the pitch is more horizontal than vertical. Most change-ups spin end-over-end like a fastball, but aren’t as fast, so the spin is detectable.

This is also why a cut fastball like Mariano Rivera’s can be so deceptive; the spin pattern isn’t nearly as pronounced as a fastball’s, but it has enough to cause late movement that flusters hitters.

It takes a batter anywhere from .2 seconds to .25 seconds to physically swing the bat. That means that at around thirty feet or so, the batter has to take the spin, location, speed, and trajectory of the ball, and decide whether he can hit the pitch or not.

The San Francisco Exploratorium has created an interesting little game for those enterprising enough to try their hand at seeing whether or not they have the reaction time to hit a 95 mile-per-hour fastball. Warning: it’s a bit addictive.

The batter continues tracking the ball and adjusts the trajectory of the bat to meet the ball in flight. A batter can only reliably track a fastball to about five-and-a-half feet before contact; after that, his brain calculates the rest of the ball’s flight based on the available information.

This explains why pitchers always strive for the elusive “late movement” on their pitches, the later the better. If they can somehow cause the ball to move within five feet of the plate, the batter will have an incredibly difficult time guessing properly, and thus hitting the pitch.

Contrary to popular belief, a batter doesn’t hit a ball when it’s “over the plate.” Advanced hitting instructors are quick to point out that the point of contact varies based on the location of the pitch. A hitter tries to make contact with an inside pitch 18 inches in front of the plate. For a pitch right down the middle, he aims for a foot or so. And for a pitch on the outside corner, the batter shoots for 5-6 inches in front of the plate to adequately drive the ball to the opposite field.

This helps to explain why pitchers make a point to establish pitches on the inside part of the plate early in the count to throw off a batter’s timing and reaction time, if ever so slightly.

Pretty self-explanatory: Either the batter accomplishes his goal and hits the heck out of the ball, or the pitcher succeeds in tricking the hitter and casually receives the throw back from the catcher, before they do it all over again.

So the next time you marvel at a four hundred-foot homerun hit by your favorite player, think about just how remarkable that accomplishment is.

Then celebrate like a crazy person and high-five anyone nearby.

D.J. Gelner is a fiction and freelance writer (and lifelong Cardinal fan) from St. Louis, Missouri. The first installment of his baseball series “Hack” is now available for the Kindle. His novel, Jesus Was a Time Traveler, is available as an ebook on Amazon, B&N, Kobo, iTunes, and in paperback on Amazon. For more of his articles, check out his web site. Follow him on Twitter @djgelner or e-mail him at djgelbooks@gmail.com.