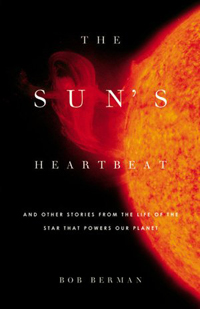 This winter I read The Sun’s Heartbeat by Bob Berman and found it fascinating. I’m going to share three tidbits I learned, in hope that they will pique your interest. Old Sol seems so steady and unchanging as he crosses our skies, but there’s a lot more to him than I dreamed.

Across the entire electromagnetic spectrum – from ultraviolet through visible light to infrared – the sun’s peak emission is green! And the reason our eyes see visible light
and not, for example, x-rays is because visible light is the vast majority of the sun’s emissions.

Our eyes are essentially sun created!

Photons Have a Long Journey

The nuclear fusion powering our sun releases energy mostly as gamma rays and x-rays, deadly radiation. So how is it that Earth receives mostly lovely light and heat, not lethal ultraviolet?

Well . . . as the photons of the gamma rays (and x-rays) leave the sun’s core, they smash into the rest of the sun’s atoms. The first layer of smashed atoms absorbs the energy and then re-emits it as more photons. Those photons bump into the next layer of atoms. Those atoms do the same thing as the inner ones: absorb and re-emit. It’s a cascade, beginning deep within the sun and radiating outward through the plasma. Of course, with each BUMP, some of the energy stays behind, meaning that by the time a photon reaches the surface, its energy has been ramped ever downward, from ultraviolet down to visible light or even lower
to just heat (infrared).

No one knows the truth of how long it takes a photon to travel from the sun’s core to its surface. (I think the scientists are just guessing!) Some say a “mere” 15 thousand years. Others say 1 million! Either way . . . a photon has a long journey!

Once a photon reaches the surface and blasts off into space, it shows its true dashing nature, racing along at the speed of light. It takes only 8 minutes and 19 seconds to reach Earth.

The dark, cooler patches – known as sun spots – that appear on the sun are accompanied by brighter, hotter spots. Thus when the sun has lots of sun spots, it also has lots of bright spots and emits its maximum energy.

Normally sun spots come and go on a regular 11-year cycle. Their numbers rise swiftly to a peak population, then slowly fall. But sometimes this rhythm
is disrupted.

From 1645 to 1715, there were virtually no sun spots. (Yes, the scientists of the day were already studying sun spots!) Europe got colder, the winters grew more severe. There were crop failures and famines. Disease was rampant. The northern lights disappeared for 50 years.

Who knew that Old Sol rules Earth so thoroughly?! One seemingly small wobble, and our neighborhood changes dramatically!

There is much more than these morsels in The Sun’s Heartbeat, however. Check it out for yourself.

(The links below are for your convenience. Do consider looking in your local library. That’s where I found the book I read.)

The Sun’s Heartbeat at B&N

The Sun’s Heartbeat at Amazon

For more about our sun and how facts about it inspired one of my stories, see:
The Heliosphere